Somebody give that man a raise. Seriously, look at the brilliant way he handled that group of players. The unnamed ref in Sunday’s CAF Champions League match between Moroccan Moghreb Tetouan and Egyptian Al Ahly was surrounded by players from the red-clad Al Ahly after making a call that Al Ahly were less than pleased with. The ref’s reaction to being surrounded should become a standard internationally from now on. Keeping his cool, this ref (whose name is nowhere to be found online) pulls out his red card. The Al Ahly players immediately calm down when he shows that he means business and they need to back off. All he needed was a red card and this coldblooded stare: 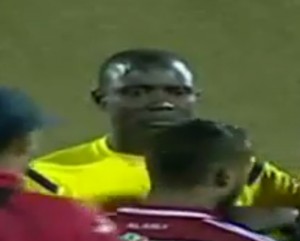 The look of a man who’s tired of this nonsense

Like a disapproving parent, he glares at the players until they retreat. He simply pulls the card out as a threat. He doesn’t need to use it and the game continues on. Please, somebody find this man and have him ref more games. A magnificent display of controlling the game.