With the defeat to Southampton over the weekend, Louis Van Gaal’s Manchester United find themselves with a strange sense of deja vu. After 21 games, they have the same amount of points as last season under David Moyes. This is a point that has been written about a lot in the last week. This is no surprise, as Manchester United were easy story of last season, going from one crisis to the next. Anything that hearkens back to that will surely draw the readers. But is it a fair analysis? 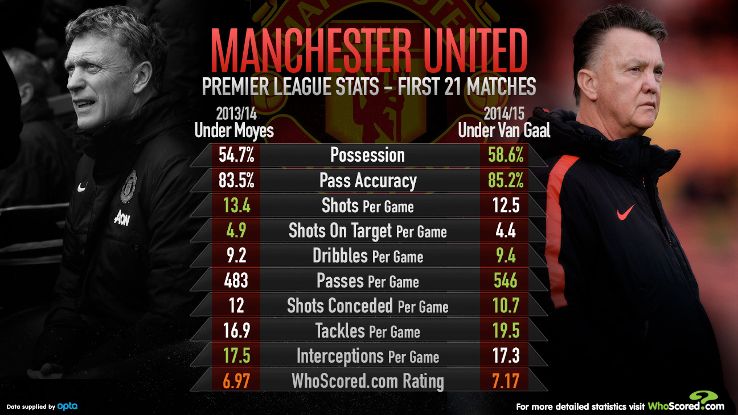 It would be wrong to say that United have been incredible or even playing at the level they should be expected to this season. The point totals alone show that. This season, United have one less win and have scored one less goal than the crisis club that they were last season. This is after they splashed £156 million on some world class players. Among these players are Angel di Maria and Radamel Falcao, who would both be counted in the top 20 players in the world. This adds to the team already swollen with talent, with Wayne Rooney, Robin van Persie, and Juan Mata taking top billing. If I didn’t have the stats in front of me, I wouldn’t believe that a squad as talented as this has scored less than the previous season. We have to remember that David Moyes is considered a defensive coach and often resorts to what is known as “Route One football”.

Speaking of defensive coaching, the defensive talent brought into the side, which includes Marcos Rojo, Daley Blind, and Luke Shaw for massive amounts of money and should have been able to help steady the defense. Instead, this is one of the shakiest Manchester United defenses I have ever seen. If not for the utterly brilliant goalkeeping of one David de Gea, United’s point tally could be even lower than last season’s at this point.

One of the reasons that is often used by fans to explain the poor stats is that this season has been absolutely blighted by injury. While this is true (Manchester United have had 52 injuries this season since August), it isn’t the worst in the league (I had to count them out manually, but the worst I’ve seen is Arsenal with 54). Injuries really shouldn’t be used as an excuse for two reasons. First, as I hinted at above, all teams have to deal with injuries. It’s part of sports and it’s why teams hire physios. Second, with few big sales in the transfer window, the United squad has been largely improved. This means that even with players injured, there is still a large squad to replace the injured players.

Many fans and pundits disregard poor stats and point totals because positioning is what’s important. Manchester United is currently 4th this year when they were 7th at this point last year. Granted, positioning is important and 4th is far better than 7th, but that has nothing to do with how a manager and team performs. That has to do with how well other teams perform. 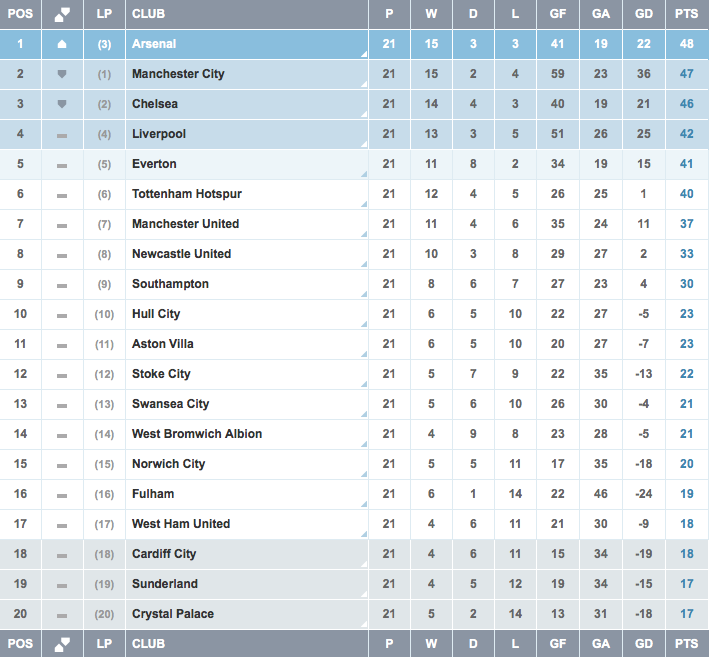 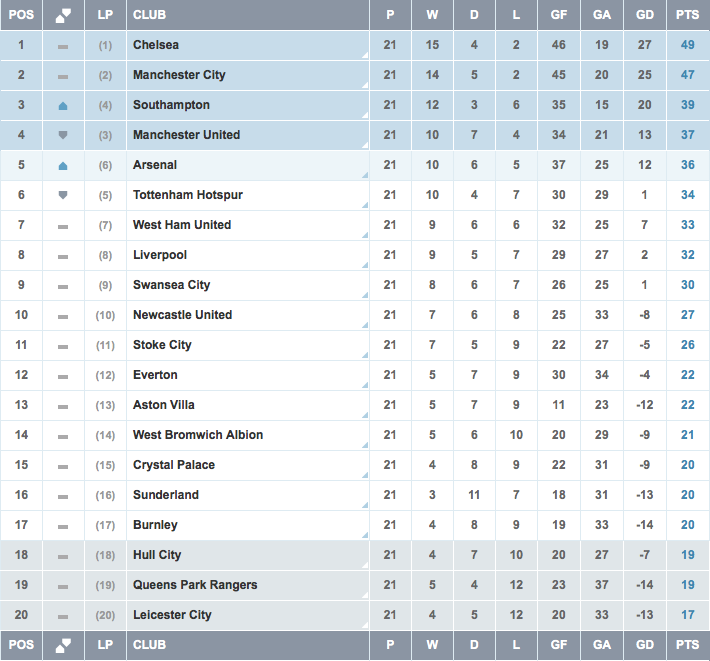 As you can see, four teams who are competing with Manchester United for top four positioning are doing worse this season than last season. Arsenal fell from 1st to 5th and lost 12 points. Liverpool dropped from 4th to 8th and dropped 10 points. Tottenham stayed in 6th but lost six points. Everton plummeted from 5th to 12th and are 19 points lower than where they were last season. It’s not up to David Moyes and Louis van Gaal to determine how badly another team plays, other than the games they directly play against those teams. All in all, one just got lucky over the other in regards to other teams results. Not to mention, Moyes had more games on his schedule with Champions League while van Gaal doesn’t have European competition this year. This year’s United team should be better refreshed and play better than last year’s United team based on that as well.

The real reason why Manchester United fans don’t seem to be as concerned this season as they were last season is this: it comes down to the perception of the manager. Last season, David Moyes appeared to be clearly out of his depth. His press conferences were about as far from inspiring as one could get. His tactics were woeful and often boring. He appeared to have lost the players’ respect. These are all major issues. The biggest, however, was that he was in direct comparison with Alex Ferguson, the greatest coach Manchester United has ever known. Ultimately, though, Moyes was heading in the wrong direction and the decision to sack him was probably the right choice.

Compare this to Louis van Gaal this season. He is fiery in his press conferences and inspires hope in the fans. He clearly has the respect of his players and, at times, he has them playing some enjoyable soccer. van Gaal also has a great resume, having coached Bayern Munich, Barcelona, and Ajax, some of the biggest clubs in world soccer. This, along with the fact that he is being compared with Moyes and not Ferguson, has certainly bought him more time. The most important thing, though, is that fans are seeing improvements in the squad. There is a general feeling that they are headed in the right direction.

An excellent comparison to this situation actually can be drawn from United’s most bitter of rivals, Liverpool FC. Specifically, the case of Roy Hodgson’s disastrous management of the club. When he was ultimately sacked (to be replaced by a legend of the club temporarily, sound famliar?) it was because it was clear it wasn’t just a bit of bad form the team were going through, they were headed down the wrong path. This is, of course, completely applicable to David Moyes and his tenure at United. Liverpool’s current manager, Brendan Rodgers (while also going through a bit of a rough patch this season), started poorly at Liverpool but showed enough improvement to convince the fans and the owners that he was the right man for the job. What needs to be seen from van Gaal, however, is continued improvement. If van Gaal finishes this season on the same point tally as his predecessor, I wouldn’t be shocked to see the fans turn on him.

All stats and images in this article have been provided by WhoScored.com and PhysioRoom.com, two excellent resources for stats and injury news.