Three points and advance — that was the task at hand for the United States men’s national team on Friday night against CONCACAF minnow Haiti. With a 1-0 win over the Haitians, the USMNT took all three points and claimed the top spot in Group A.

But, just because the result was positive doesn’t mean everything was right in the world of the men’s national team. Results matter, especially in the later stages of the Gold Cup, but early on against the weaker sides in CONCACAF style also matters.

Mexico went out on Thursday and smashed a minnow, beating up on Cuba by a 6-0 scoreline. It wasn’t just the final score, but the sheer brilliance of what Mexico put on the field that mattered. That was a side that looked focused and ready to dominate its way to a Gold Cup title.

On the other hand, the USMNT have struggled to two one-goal wins against Honduras and Haiti to date. That’s not exactly confidence building, but it appears manager Jurgen Klinsmann had a plan all along.

“There’s a tricky situation that especially now in the Gold Cup you play every three days the group games which is a very, very short turnaround for every team,” Klinsmann said at his press conference on Thursday evening, via MLSsoccer.com. “We think through that. We also still see a lot of competition going on in our own team. There are quite a lot of fifty-fifty situations going on the table.”

Competition, experimentation, whatever one wants to call it, is fine during international friendlies and tune up games. Doing so while in the middle of a big tournament? It could have disastrous consequences and it nearly did on Friday night in Foxboro, Mass.

Hidden in that 1-0 scoreline against Haiti on Friday night is the fact that the USMNT wasn’t exactly on its best foot. The minnows gave the Americans all they could handle and then some, especially in the first half.

It was a half highlighted by Jurgen Klinsmann’s decision to start a brand new back four in defense ahead of goalkeeper Brad Guzan. Klinsmann put out a back four of Greg Garza, Tim Ream, Omar Gonzalez and Brad Evans — four players who had little to no experience playing as a group together let alone on the national team stage (looking at you Greg Garza).

While it was understandable to want to get Garza in to a match and get him tied to the USMNT program officially, the question is, was doing so in a regional tournament with great significance to the US program the right time to do it?

Judging by the results, not so much. Garza was pulled after just 60 minutes and replaced by Tuesday’s starting left back, Fabian Johnson. Not coincidentally, along with fellow second half sub, Gyasi Zardes, things began to flow through the left side of the field for the USMNT.

But, that aside, the play from the back line and overall lacked quality and cohesiveness in a tournament that calls for exactly that in a few short days.

At many points in the first 30-plus minutes Guzan spent most of his time uttering obscenities at his new back line. He also spent plenty of time diving, flying the through the air and thanking the crossbar as Haiti weren’t afraid to attack and take chances. If it weren’t for bad luck the Haitian side wouldn’t have had any in the first 45 minutes. 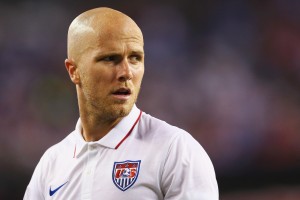 <>during the 2015 CONCACAF Gold Cup Group A match between United States and Haiti at Gillette Stadium on July 10, 2015 in Foxboro, Massachusetts.

It wasn’t just the back line that was depressing in the first half either, as many fans saw the poor form and effort from forward Jozy Altidore. Many also saw that because of the back four and Altidore’s performance, one Michael Bradley was often unable to control things in the midfield. Either he sacrificed attacking play to provide cover for the back line and link up quickly out of that group or he sacrificed covering for a shaky back line while trying to provide the spark for Clint Dempsey and Aron Johannsson.

No doubt that Klinsmann has a point with the fast paced nature of Gold Cup group stage play likely necessitating some changes in starting rosters. So does CONCACAF allowing players to be changed in and out after the group stage.

It still doesn’t make up for the fact that this isn’t a new or necessitated phenomenon under Klinsmann. His wholly changed back line on Friday wasn’t out of thin air, it’s been a pattern of his tenure as the USMNT manger.

Just how willing is Klinsmann to experiment? Take this little nugget for example:

This is the 13th different backline for the #USMNT in 15 games since the World Cup. #USA #USAvHAI #GoldCup

Ironically, fans of the United States national teams have been treated to coaches at the opposite end of the spectrum over the past month.

With the women’s national team, manager Jill Ellis was oft-criticized for her rigid lineups and unwillingness to make changes. In the case of Jurgen Klinsmann, he’s been on the opposite end of the spectrum — willing to experiment with his lineup at almost any level and any game.

Perhaps Klinsmann would be wise to take the opposite page out of the book of Ellis. After seeing things failing (and some forced changes thanks to yellow cards) during group stage play at the Women’s World Cup, Ellis began to make changes that helped this team become champions.

She made the tough choice to sit Abby Wambach, change how the midfield played and put in some different defensive looks. It was change that sparked the USWNT in a big way and made a difference. No longer was the team launching long balls out of the back hoping to find Wambach up top and playing off of her. Instead the team was able to play with more creativity through the midfield and became faster and less predictable because of it.

On the other end of the spectrum, Klinsmann has experimented with his lineup way too much. Continuity seems to be the key to successful play for this group of USMNT players, especially on the bigger stages.

To his credit, Klinsmann has been good at identifying issues in game or from game to game and making the necessary changes. But, he’s also gone too far at times and last night was a perfect example of it.

Go ahead, tinker away in meaningless (other than pride) international friendlies or warm up events, heck even try something new now and then in the earlier stages of World Cup qualifying if you want. That’s where it needs to end though.

When the USMNT heads in to the final stage of World Cup qualifying and regional championship play, the time for tinkering and “seeing what happens” needs to end.

Klinsmann’s obsession with finding the right mix in the back nearly cost his team on Friday night, hopefully its the wake up call to stop experimenting and start putting his best group out there on a regular basis — together and finally.

Maybe that happens as group stage plays, but recent history suggests Klinsmann loves him some tinkering no matter what. If he breaks that habit, perhaps the USMNT looks the part it should and takes home the Gold Cup and berth in the 2017 FIFA Confederations Cup as a result.