Mexico is coming into the Copa America Centenario with some pretty lofty expectations, winning nine consecutive matches starting with the Confederations Cup playoff against the United States, having not lost a game yet under new manager Juan Carlos Osorio and with Mexico playing in Phoenix, Houston and Los Angeles, they are basically playing home games in each United States city.

So the expectations for them to get out of their group and make a good run to the title are high according to fans and Mexican media. But, realistically can Mexico, a team that usually sends their U-23 squad to play in Copa Americas as invitees, win it all?

Osorio has really done well when choosing his squad as he has a good mix of veteran leadership in the backline and upfront with a veteran goalie corps, Marquez commanding the back and Chicharito’s explosiveness up top. But in the warmup games leading into Copa America, Osorio has been experimenting with his lineups a bit. During the Paraguay game he went with a 3-5-2 that at times looked like a 3-4-3 Diamond, and going against Chile he lined up with his customary five defensemen with a 5-2-3 lineup.

It is uncertain if Osorio will go for the five-man, four-man or three-man backline (not advisable), but we at 32 Flags will try and predict the starters that Osorio will use going forward into the tournament. Since Osorio usually plays five defenders, we will use that as as the base of the lineup.

The Malaga keeper is the most experienced out of the trio of him, Corona and Talavera, and Ochoa seems like the sensible choice for Osorio. He has played in two World Cups, has proven his worth as the first-choice goalkeeper and is the most obvious choice to start for El Tri against the tough South American opposition. 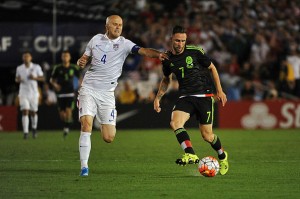 Miguel Layún battles for possession of the ball against USMNT’s Michael Bradley during the Confederations Cup playoff game in Pasadena, Calif.

Opting for a more defensive style of play has paid off for the Mexico squad, so might as well stick with what has gotten you nine consecutive victories, right? Although, Márquez is getting on in years, his presence for the backline can be key for El Tri. Look for Moreno and Reyes to lock things up in the center, even though Osorio has been placing Nestor Araujo as center back for the past two matches. But, most importantly, look for the fullbacks to try and start those quick counter attacks. Layún started off shaky earlier in the year for Mexico, losing possession easily and getting burned by oncoming attackers, but since joining Porto he has really come into his own and look for him to be a real force for the Mexican squad.

With Mexico taking very few midfielders, putting three on this list seems excessive, but these are the best that Mexico has to offer. Guardado with his solid leadership and his nose for goal will be key for Mexico. Complimented on the sides by Herrera and the speedy youngster Damm on the touchlines could provide a key source of attack for Mexico as they can cross balls to find the Mexican strikers. However, recently Osorio has been starting Carlos Peña, so look for him to maybe get some playing time over Damm.

In what is a no-brainer, Chicharito should be on Osorio’s starting XI as he is heating up both in club and international play. His goal goal as a sub coming in for Mexico only solidifies himself as Mexico’s darling son and really gives the Mexican faithful hope that they can go far in the tournament. However, as for the second forward it is really tough to choose one as Mexico is taking a plethora of great attackers and as much as Javier Aquino was a contender to start over Peralta, Peralta is more experienced and has better chemistry with Chicharito.

Mexico is faced with a relatively weak group, Uruguay being the only real threat to Mexico advancing into the next stage, Mexico can go far into the tournament. However, their first game against Uruguay is a must-win for them because if Mexico loses that game they will most likely finish as runner-up in Group C and will have to face the Group D winner, which will most likely be Argentina. And ask any Mexico fan about Mexico’s fortunes against the Argentines and they will tell you, Argentina dominates each time.

If they do go on to win the group, they will have to hope that Argentina does win out so they can face what will most likely be Chile as runner-up, a team they just beat in their last warm up game before the Copa. Also, they won’t have to face Argentina until a possible championship final in New Jersey, but first they must focus on winning the group.

So this team has a great promise to win the whole thing for the first time ever, but they will have to focus, keep playing great soccer (as they are doing right now) and maybe they can make their rally cry and Twitter hashtag #AmericaParaLosMexicanos (America for the Mexicans) a reality.