Who’s ready to make some more money? Ok I’ll admit last week was a little rough, I hit on some, missed on more, and told you not to take West Ham (+1000) against Manchester City. But when you’re trying to make money it’s important to take note of what trends are going on this season, especially this one. In 60 matches this season, the home team as won just 19 of them – which checks in at just under 32 percent. If that number seems low it’s because it is low, and it’s only that high because on matchday five seven home teams won. No other week has seen more then three home teams win.

That’s a good little trend to keep that in mind going forward, (so you have full permission to let me hear it when I ignore my own advice and it blows up in my face). Not a lot of big matches featuring the traditional ‘big’ teams this week, meaning most of those games have skewed lines that don’t carry a lot of value. But what it also means is there are a lot of great games (and lines) featuring the smaller clubs.

I just wrote a whole paragraph on how there’s no value in the big teams this week so why start with this game when United are going to win it? Well if you do want to play it it’s worth taking a look at Anthony Martial to score first (+375). There’s also another secret I wanted to share with you. David de Gea hasn’t kept a clean sheet in the league since March, which makes both teams to score (+350) VERY intriguing.

You know what that line means. Bookies have no idea how this match is going to play out. But here’s a fun fact, Watford haven’t conceded a goal at home all season, and probably won’t concede one this weekend either (the bookies do know that as betting “no” on both teams to score comes in at -120). However there are a couple of enticing options here, Watford to keep a clean sheet (+190): yes please. I know you might be thinking, “but hey Crystal Palace play pretty well away from home.” That was true in August when they won three of four, but they’ve lost both matches in September so far. Suddenly that win at Stamford Bridge seems like a while ago. If you think Watford will win (spoiler alert: I do) think long and hard about Watford to win 1-0 (+600) or Watford to win 2-0 (+950). 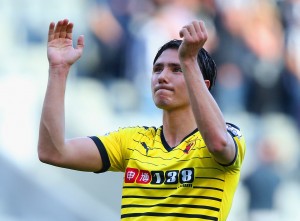 West Brom has actually been better then you thought this season. They haven’t conceded a goal against anyone not named Manchester City or Chelsea and their attack will only get better now that Saido Berahino is back in the mix. On the other side of the pitch, Everton haven’t conceded a goal away from Goodison Park yet this season. The safe play here is just taking that draw at (+230), but if you want to look into things and make a little more you’ll notice something about those defensive records. They mean this game will be lacking something important, goals. In fact that bookies know that too

Both teams to score

Even the bookies know there won’t be goals in this one, which is why instead of taking that draw be a little bit more daring, 0-0 draw comes in at (+675). I’ll take that one.

There’s no denying West Ham have been fantastic away from home this year. At home though, not so much. Norwich has been a little feisty though and at (+225) that’s pretty enticing. Stoke are still struggling to find their identity this season, which will come in handy when current Golden Boot leader Callum Wilson and Bournemouth come to the Britannia. I know the Britannia’s size makes it tough for new clubs to come in there and win, but Bournemouth are used to playing in small stadiums so won’t be a problem for them at (+170).

Enjoy the weekend and good luck getting rich everyone!

(Remember that this is for entertainment purposes only. Know the risks of gambling and results may vary. Good luck.)