“In an era of Champions League superstars, do fans still care? Do the fans still dream of drawing a big club, of slaying a giant? Do the players dream of the Wembley arch, like I once dreamed of the Twin Towers? Do the chairmen still pray for a lucrative draw at Anfield or Old Trafford? Is the cup still about glory and romance, and carving your name in history? I set off in search of the soul of the FA Cup.”

That’s how Gary Lineker opens his 2015 documentary about the FA Cup as he searches to discover whether the FA Cup still means “as much to them [the people of English football] as it did to me as a boy, and still does now.”

Lineker’s documentary is a must watch for any American fan of English football. The tremendous amount of growth the English Premier League has seen over the past decade in America has led to a fabulous amount of coverage it now gets in the America media. While that’s certainly a good thing, it also has it’s drawbacks. With more coverage comes more saturated coverage. The same talking points can be repeated over and over again, and many new fans can often latch on to those talking points because, to no fault of their own, they just don’t know any better. Those talking points tend to be about squad rotation and fixture congestion, especially in January when the FA Cup begins and teams are exhausted from the festive period. TV pundits will harp on how it’s probably better to bow out of the cup, focus on the league and follow the money, than to make a long cup run and have your league position hurt. Unfortunately, many American fans buy into this line of thinking.

I became a Manchester United fan because the goalkeeper for my local club, Tim Howard, joined them in 2003. That season Arsenal went undefeated in the league, they were “The Invincibles,” but it was United that knocked them out of the FA Cup. The following season, United fell in a heartbreaking shootout loss to Arsenal in the FA Cup Final.

Some of my earliest memories of European football have to do with the FA Cup, therefore it’s always been a competition that I’ve treated special. The problem is, many of my friends don’t see it the same way I do. Most of my friends have become fans of the beautiful game more recently then me, to them the FA Cup seems to be a nuisance. I’ve had friends who are Spurs fans, a club that takes pride in their FA Cup history despite not winning it in 25 years, tell me they hope Spurs would throw out a team of reserves in the third round and lose so they can concentrate on finishing in the top four. I’ve had friends who are Arsenal fans, the team that’s won the competition more than anyone, tell me they hold no value to the FA Cup, and want to see the club concentrate on winning the league again.

It’s easy for us Americans to think this way. We only get what we see on TV. We tune in for two hours to our clubs matches every weekend, and we dream of being able to watch our teams play midweek in the Champions League.

That’s all that’s important to us, because we don’t live in England. We as Americans don’t know what it’s like to have to go to school or work the following Monday after a big cup tie. In fact, unless you live in New York, the odds are where you went to school as a kid, or where you work in a big city now, everyone rooted for the same NFL franchise. That’s not the case in England where every major city has at least two different clubs. A school in Manchester will be divided between red and blue, a school in North London between Arsenal and Spurs.

It’s hard for us as Americans to grasp how big the cup means to them. If you have a poor season in the league and your rival does better then you, they’ll own the bragging rights over you all summer. But if you won the FA Cup, you have the upper hand.

That’s where Lineker’s documentary comes in. It’s an absolute must watch for any American as it does a fantastic job of showing you how much magic this competition truly has. 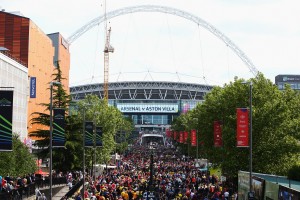 FA Cup Final day, is England’s version of Super Bowl Sunday. Lineker talks to the players who have shined in the final, so much so that certain finals have been named after them (ie the Michael Owen game in 2001 or the Steven Gerrard game in 2006). They all speak about their memories of sitting around all day waiting to watch the FA Cup final and how they dreamed of scoring the winning goal in a cup final at Wembley. He talks to Ian Wright who tells him that as boys, he and his friends used to play “FA Cup” on the patch of grass outside his housing project. The same way an American dreams of winning a Super Bowl, an Englishman dreams of winning at Wembley.

Lineker visits a house in Cambridge, where five players from the League Two side Cambridge United live together. The lads talk about the excitement they have over getting to face Manchester United, which is a dream for one of them who’s been a lifelong United fan. The boys talk about their dream of getting a draw and getting to play at Old Trafford, a dream that ultimately came true. For them, standing out in this game could be an opportunity to get picked up by a bigger club.

But it’s not just the people in England. Perhaps nothing shows how special this competition is more then his interview with then Chelsea manager Jose Mourinho. Mourinho talks about how as a boy in Portugal how they always looked forward to watching the FA Cup final. They didn’t care for the Portuguese Cup, or the Coppa Italia, or the Copa del Rey in Spain, but everyone cared about the FA Cup.

Mourinho glosses about how no other country has something as special in the FA Cup. He talks about how if Inter played at Napoli in the Coppa Italia, maybe 10,000 fans would show up, but for his first game at Stamford Bridge there were thousands of Scunthorpe fans in attendance.

What speaks loudest about Mourinho are his two favorite personal FA Cup moments, winning the 2007 final against Manchester United at Wembley Stadium and losing to Bradford City at Stamford Bridge.

“You can’t lose, but you did” said Mourinho when asked why losing to a team two levels below Chelsea ranked as one of his favorite moments.

“It’s the beauty of football where the much better team can lose,” Mourinho said. “It’s more possible to happen in this country and this competition because the mentality of the small teams is really special.

If you haven’t seen “On the Road to FA Cup Glory” yet I highly recommend it. Gary Lineker talks to a very wide range of people who have since become immortalized by the FA Cup, or even heartbroken by it, which really gives you the feel of what this tournament means in England. Then next year when your team fields a full squad in the third round, when the fixtures are piling up and you think the players need a break, you’ll understand why.