Just a few years after winning the title in the Championship, Leicester City looks in prime position to make a title run in the Premier League as well. To think that this is the team that made a great escape to avoid relegation last season, suffered an embarrassing episode that saw players kicked off the team for racial insensitivity while in preseason in Thailand and parted ways with their coach right before the start of the season.

Truly a Cinderella team, and it’s hard not to root for the Foxes as they are one of those teams that is threatening to break the monotony of the past 10 seasons that have seen only three teams crowned champion in Chelsea, Manchester United and Manchester City.

So 32 Flags looks ahead at the top 5 fixtures will be key for the Foxes if they want to make a run at the Premier League title.

This matchup will be important for Leicester as this game comes after the week break due to international play. The break will give Leicester one of two things: 1. much needed rest going into the final stretch of the season if they are still in contention for the title or 2. a chance to regroup after a very tough two months in February and March if they slip down the table. But more on the month of February later.

This matchup will be key as it can set the course for the final seven games of the season, and a step in the right direction with a win over the Saints would be nice for Leicester if they dream of lifting the cup at the end of the season.

To win the title, Leicester must beat Manchester United, period. The game is one of Leicester’s final three games and, more than likely, Manchester United will be in the thick of things battling for the title as well. So it is crucial for Leicester to go to Old Trafford and walk away with an imperative three points, if they want to head into the last weeks with a chance at the title. 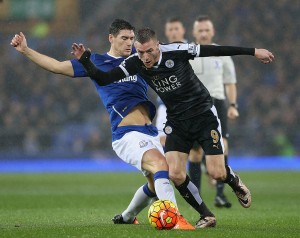 LIVERPOOL, ENGLAND – DECEMBER 19: Jamie Vardy of Leicester City and Gareth Barry of Everton compete for the ball during the Barclays Premier League match between Everton and Leicester City at Goodison Park on December 19, 2015 in Liverpool, England. (Photo by Nigel Roddis/Getty Images)

The month of February will not be kind to the Foxes at all. To start off the month, they will play host to Liverpool to start their toughest — and most important — stretch of this Premier League season.

Granted Liverpool hasn’t been wow-ing anyone since Jürgen Klopp took over the reigns for the Merseyside club, but you can’t overlook that Liverpool has the capacity to play great football. Look for the Reds to play spoiler as they try and move up to the table to achieve a Europa League birth. Not to mention that Liverpool handed Leicester one of their only two losses this Premier League season, so the Foxes will be keen to try and win this one at home.

Just four days after the Liverpool fixture, the Foxes will have to leave the comforts of King Power Stadium for two matches as they continue their toughest stretch of the season. Their first game is against Manchester City at the Etihad in what will be a matchup of two of the league’s top offenses. Leicester’s Jamie Vardy and Riyad Mahrez and Manchester City’s Sergio Agüero have a combined 38 goals among them.

Leicester will have to walk away from this fixture with some points if they want to distance themselves from the Mancunian club, as Manchester City and Leicester have been battling for position in the top three positions since week 13. The Foxes will also have to play a more inspired football than the last time they faced off against City, in which both teams split points in a nil-nil draw at Leicester.

Obviously the big fixture as this match will feature the number one team against the number two team so far. Such a big fixture this is, that Sky Sports has moved the date from Saturday the 13th to the next day to have live coverage for the game. This will be a crucial match up as Leicester will look for revenge after suffering a 5-2 thrashing at home at the hands of the Gunners.

This will cap off a very important stretch that is the month of February, and if Leicester manages to secure some wins during this tough month then they will be sitting pretty looking ahead at what could be their most successful season in 1928-1929. That year they finished runners-up losing the title by one point to Sheffield Wednesday.

However, one important factor for Leicester City going forward is their lack of schedule congestion. With Arsenal, Manchester City, Manchester United and Tottenham still in the mix for various trophies, fatigue will set in for the big clubs. Meanwhile, Leicester will have clear sailing going forward as their main focus will be a Premier League title.