Next to El Classico, it’s the biggest match in club soccer. This Sunday, Liverpool and Manchester United will meet for the 194th time in their history. The clubs are not just the biggest rivals in England, they’re the two most successful clubs in England with 38 league titles between the two of them. 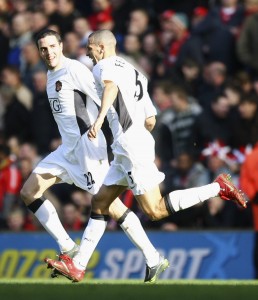 When Sir Alex Ferguson took over as Manchester United manager his goal was to ‘knock Liverpool off their perch,’ a seemingly impossible task as Liverpool had won the league 18 times, and United just seven. 21 years after Liverpool’s most recent title, the impossible dream was completed in 2011 when Manchester United won their 19th league title. They would go on to add a 20th in 2013.

In any sport, you would think that when your team is getting set to take on their biggest rivals that would be the match that fans look forward to most. But not me.

I am a Manchester United fan and I hate the Anfield fixture.

It’s a strange feeling actually. I don’t like backing away from a challenge but the truth is things always seem to go wrong for United at Anfield. Sure there have been good times, but the good times don’t seem to stick with you nearly as much as the bad ones do.

I’ll never forget Juan Mata’s brilliant volley for his second goal last year, and I always love watching Diego Forlan pounce on a goalkeepers mistake in 2002. Of course who can forget John O’ Shea’s smash and grab that was vital in securing United’s first title in three years back in 2007.

Unfortunately, when I think of Anfield, those aren’t the first memories that pop into my head. United actually won at Anfield twice in 2007, but since then they’ve only won twice. Since 2007, when I think of Anfield, I think of Dirk Kuyt scoring over and over again, and then some more. I think of Nani heading the ball completely back in front United’s goal to set up yet another Dirk Kuyt goal. Who could forget Dimitar Berbatov’s first game in a United shirt, where he set up Carlos Tevez a mere minutes into the match only for things to go drastically downhill after that. I think of Fernando Torres practically eating Nemanja Vidic alive until the ref gave Vidic a red card presumably to spare him of any more humiliation. And then there’s the disgusting display United put out there under David Moyes, when United never looked like they were in the match yet Moyes had the gal to say he thought it was the teams best performance of the season. 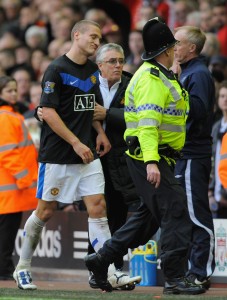 LIVERPOOL, ENGLAND – OCTOBER 25: Nemanja Vidic of Manchester United is sent off by Referee Andre Marriner after fouling Dirk Kuyt of Liverpool during the Barclays Premier League match between Liverpool and Manchester United at Anfield on October 25, 2009 in Liverpool, England. (Photo by Michael Regan/Getty Images)

For Manchester United fans, the problem with going to Anfield is that the low point of losing is really low, but the high of winning isn’t so much a high as much as a sigh of relief. I know that saying that may make me seem like an elitist United fan but the truth of the matter is there isn’t really much on the line when these two teams face each other anymore.

Gone are the days where these two teams are battling it out at the top of the table. Nowadays the only thing on the line between these two clubs is maybe a shot at fourth place, if either of them could even get that high.

As much as all rivalry games suck to lose, this isn’t to say I feel this way about all of them. It’s still always fun to beat Manchester City. Perhaps that’s because in recent years City have put themselves on United’s level to compete for titles. Losing to them is still terrible, but beating them has that ‘let’s remind you who the real club in Manchester is’ euphoria. Until Sir Alex Ferguson retired in 2013, the last few years of his era saw United competing for titles while Liverpool wallowed away in the middle of the table. Those matches felt like United needed to win simply because they were the bigger team, it often didn’t turn out like that but when it did you simply breathed a sigh of relief, taunted some Liverpool fans and then moved on to the next game.

It truly is a shame this terrific rivalry has fallen a bit. It would be great if in the near future these games could go back to being matches that could swing the title race. If that happens, will I enjoy them anymore? Probably not, but I can still tell you this Sunday morning I’ll be glued to my TV watching and holding my breath, praying that United don’t get embarrassed at Anfield once again.