Former Manchester United defender and captain Nemanja Vidic announced his retirement from football Friday. Last week Vidic and Inter Milan reached a mutual agreement to terminate his contract, and a week later Vidic cited recent injuries when telling ManUtd.com that it was time for him to step away from the game.

“”Where is he from”….”he is well out of his depth”… these were the type of comments flying around the training ground after the 1st few training sessions we saw Vida!” Ferdinand wrote.

Instead of letting the judgement get him down, Vidic went to work. Within six months he had imposed himself as a first choice center back for Sir Alex Ferguson and within a year he had become one of the greatest and most feared center backs in Europe. Together with Rio Ferdinand, the two formed what is perhaps the greatest defensive partnership in the history of the Premier League, and possibly Europe.

Vidic was an imposing center back who never shied away from trying to win the ball. He was fierce and physical player who never backed down from a challenge on the ground or in the air. He was such a physical beast however that many people would forget about how good he was on the ball. He was a complete defender who loved getting forward on set pieces to score goals.

Score goals he did, 21 times in his eight years for United, many of which were big. To look back on his great career, here are his five best goals for Manchester United.

(Note: Since YouTube is terrible at individual football highlights this video has all his goals. During the countdown we’ll point out where in the video you can find each goal)

This was the one that started it all. After taking the latter half of the 2006 season to settle in at Old Trafford, Vidic found himself out of the matchday squad for most of the first month of the 2006/07 season. Then came the Wigan match. It was Vidic’s third start of the season and United went down 1-0 thanks to an early Leighton Baines goal. Despite United knocking on the door the whole game they couldn’t get a break through. Finally in the 62nd minute Nemanja Vidic rose to head home a Ryan Giggs cross and bring United level. The Red Devils would go on to win 3-1 and Vidic had essentially cemented his place as United’s first choice center back for nearly the next decade. 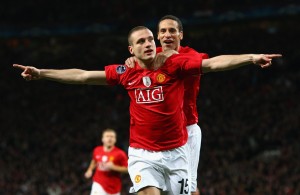 Manchester United were trying to make it back to a second straight Champions League final. It would be a tough task when they were drawn against the Italian Champions Inter Milan in the round of 16. Vidic was suspended for the first leg at the San Siro, a 0-0 draw, which resulted in a tense return leg at Old Trafford where a loss or a scored draw would see the holders eliminated. Just four minutes into the match Vidic reminded United fans what they missed in the first leg when he hammered in another Ryan Giggs cross to give United a lead they would never relinquish. It also spawned this picture which has since become iconic among United fans.

Considering United had only improved a team that won the Premier League and Champions League double the season before it was a little disappointing to only be sitting in third when Sunderland arrived at Old Trafford in December. What made matters worse was United’s complete inability to break down the Black Cats all game long. In the 91st minute Michael Carrick’s shot from distance hit the post, but Nemanja Vidic was ready to hammer home the rebound to give the Reds a crucial three points and who could ever forget that celebration?

In his first season as United’s captain Vidic led the Red Devils to Villa Park in November. There was only one problem, for much of the match United seemed to have forgotten how to play football. A dull first half ended 0-0 (back in the days when that scoreline was rare for Manchester United) and was made worse when Villa took a 2-0 just 14 minutes from time. United pulled one back thanks to Federico Macheda, but still needing a goal to rescue a valuable away point, the captain took matters into his own hands, getting on the end of Nani’s cross and grabbing the equalizer with a very impressive header.
2a) In the return fixture at Old Trafford Vidic had a fantastic strike against Villa (3:21 mark of video). That goal may have been the nicest goal of his career, it just wasn’t nearly as important, but I’d be remiss if I didn’t mention it. 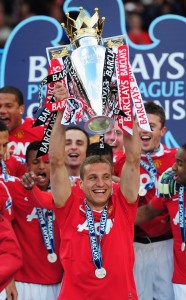 This was essentially the game where Manchester United put a dagger in Chelsea’s title hopes. Javier ‘Chicharito’ Hernandez scored 45 seconds into this one, but it was Vidic’s 23rd minute goal that put the game out of reach, giving United their 19th English League title and Vidic’s first as United skipper.

Congratulations on a terrific career. The Premier League will miss you.