As the final whistle blew and the scoreboard read 2-0 Stoke City, the visiting Manchester United walked away embarrassed and throughly defeated by a side with little of the history, big name players or lofty wage bill of themselves.

It wasn’t the first time in the 2015-16 campaign under Louis Van Gaal, but it may have been the managers last time. The gulf of quality and imagination were clear on this day — and it was the fourth-straight loss in all competitions for Manchester United.

It all adds up to Red Devils’ manager Louis Van Gaal likely on his way out as manager.

No doubt his year-and-a-half spell at one of the world’s biggest clubs has been an utter failure by the standards set forth by this club. Trophies, and lots of them, are the only thing that will satisfy most in the rabid fanbase and Van Gaal hasn’t even come close to sniffing one of them.

Most of the blame for that failure has been laid at the feet of the Dutch manager, but it is really his fault this team is sitting where it is?

Perhaps some of the blame lies in unreasonable expectations? After all, making the Champions League seemed to make supporters believe bigger things were coming along following the 2014-15 season.

Reality? Manchester United were never serious contenders in 2014-15, finishing 4th on 70 points and off the top of the table by a full 17 points.

That’s hardly a side on the way up to an EPL title challenger in one offseason. It was also a side that was expected to do great things with the likes of multi-million pound transfers in Angel Di Maria, Luke Shaw, Ander Herrera, Marcos Rojo and Daily Blind. There was even the loan spell for Falcao.

Only Ander Herrera has been quality in that transfer class, and that’s not saying too much.

This offseason, Van Gaal attempted to get things right with his defensive set up and find a few more creative options for his front line. He added Morgan Schneiderlin from Southampton and Bastian Schweinsteiger to shore up the spine of his squad, but neither have been a factor at all this season. 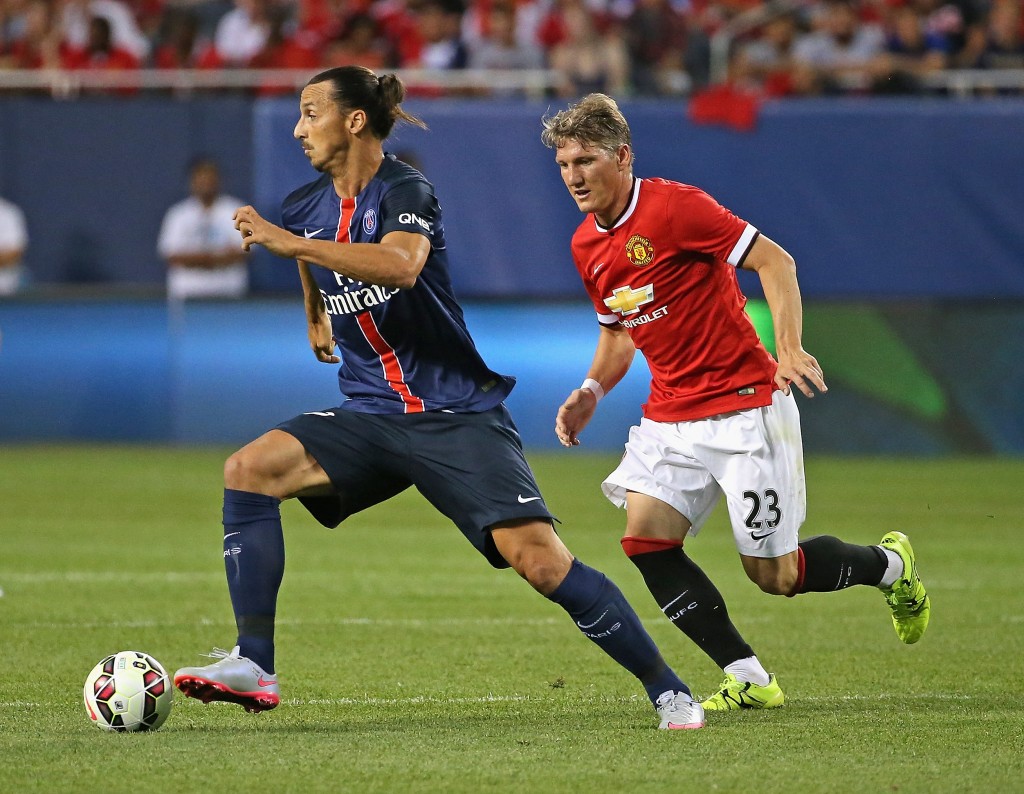 CHICAGO, IL – JULY 29: Zlatan Ibrahimovic #10 of Paris Saint-Germain is chase by Bastain Schweinsteiger #23 of Manchester United during a match in the 2015 International Champions Cup at Soldier Field on July 29, 2015 in Chicago, Illinois. (Photo by Jonathan Daniel/Getty Images)

Schneiderlin has made 16 appearances in all games, but was dropped just this week ahead of the Stoke match. Schweinsteiger has been oft-injured and has appeared in just 11 EPL matches this season.

With two of the biggest hopes to change the spine of this squad ineffective or out of action, the best laid plans of Van Gaal haven’t been able to fully take hold.

Additions of Memphis Depay and Anthony Martial have proven to be flops so far too, with Martial failing to find a comfortable spot and Memphis completely out of sorts all season long. The duo have struck just six goals in 18 matches, with Martial leading the squad with four goals on the season.

That’s hardly a high return on transfer free investment, but that brings up the ultimate question. Is it Van Gaal failing as a manager or the players simply not living up to expectations?

Suggestions in the press are that Van Gaal has lost the team, no one wants to fight for him and it shows in the play of signings like Memphis and Martial. However, club captain Wayne Rooney sees things very differently.

“Obviously you have a lot of people talking about things they believe are happening but in reality a lot of people who are writing that stuff don’t know what’s happening,” Rooney told Sky Sports News HQ, via The Independent.

“We’re working hard and fighting for the manager to try to get results and turn the season around. It’s important we all stick together.”

Despite those assertions, the play on the field certainly suggests a team that has checked out, aren’t even fighting for themselves and haven’t unleashed the massive potential and stardom seen in other places not named Manchester.

Memphis has lost the plot mentally, Martial has flashed his goal-scoring potential but can’t do it on a consistent basis and the veteran Rooney has been virtually silent on the field since Van Gaal arrived.

Does adding a healthy Luke Shaw, Morgan Schneiderlin and Bastian Schweinsteiger to the mix really change things enough? Do those three matter so much to Van Gaal’s ideal system that suddenly Memphis will wake up from his malaise or Martial will find a position that unleashes his vast potential?

If those are all answers in the affirmative, it indicates a much bigger problem within the Red Devils than just Van Gaal. It indicates a cultural issue inside the club and a sense of entitlement as well.

These aren’t exactly problems that just cropped up under Van Gaal either, and that’s perhaps the biggest reason laying blame at Van Gaal’s feet and his feet only is the wrong move for Manchester United.

Change for change’s sake is never a smart move, and it appears that what this club did in moving from David Moyes to Van Gaal. All the Red Devils did was trade one manager for another with a higher pedigree and price tag.

A quick look at the same amount of games in charge, with Moyes leading the club for 34 EPL matches, and you see similar results. The Telegraph pointed out that through their first 24 matches in charge, Moyes and Van Gaal had won exactly the same number of games (12). While at the 34-game mark, Moye’s squad sat on 54 points and Van Gaal’s side were on 65 points.

Progress clearly made, but progress that has currently stalled out with a team that has gone from top of the league to sixth in less than half of the season.

Will this club make another change in desperate hopes of changing results without changing anything else in the process?

Van Gaal may be gone soon, but it hardly fair to lay it all at his feet. The problems at Manchester United are bigger than just who is managing the club, and until the Red Devils get the rest of it figured out, few will succeed in the same chair Van Gaal tenuously occupies today.