For some clubs, reaching the Champions League is a requirement. Missing out on the top-four would be considered a complete disaster. The likes of Arsenal, Chelsea, Manchester City and their cross-town neighbors, United, are expected to be in Europe’s elite club competition.

This year, however, with Chelsea falling apart in the first half of the year, and Manchester United hosting naptime for 75,000 every weekend, the door to the top four has opened wide for some teams that would otherwise be further down the table. It’s an opportunity for some clubs to not only experience world class European competition, but also to rake in that big time Champions League pay day.

Chelsea is most likely out of the running for a top-four place, so their spot in Europe is up for grabs, United, on the other hand, are still very much in contention. We know teams like Tottenham and Liverpool will give it a shot but let’s go even deeper. Let’s take a look at a few dark horses for whom getting into the Champions League wouldn’t be routine, it would be cause for celebration. 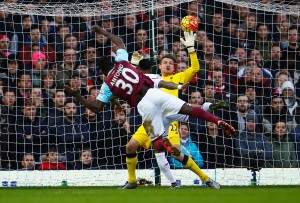 The Hammers are currently in sixth, only one point behind Manchester United, and four points out of fourth. Their fixtures over the next few weeks are pretty generous, apart from a visit from Manchester City. With matches against Bournemouth, Newcastle, Aston Villa and Norwich City on the horizon they could put some pressure on the top-four.

Can they do it? Possible. While their upcoming matches are a little on the lighter side, their run into the end of the season gets a little harder. They’ll have to deal with a Chelsea who may or may not be back, as well as big games against United and Arsenal. They will rely on top scorer Dimitri Payet to carry them, and he’s capable provided he stays healthy. West Ham will rely on their reputation as giant-killers to climb into a Champions League place. They’ve beaten Liverpool, Arsenal, Chelsea and Manchester City this season, and they’ll need to do that again if they have any hope of moving up. It’s just going to be an uphill climb is all.

Sitting only one point back of West Ham, and only 5 points back of a top-four spot is another London club. Crystal Palace’s best finish in the Premier League was 10th and that came last season. They’ve been inconsistent this season, and that could hurt their chances.

Can they do it? Doubtful. Being close to the top-four will be considered a huge success for Alan Pardew. But getting into the top-four will probably be too much to ask. Still on their fixture list are trips to Arsenal, West Ham, and both Manchester Clubs. Getting much-needed points in those four matches will be a daunting task. They will need to start scoring more, as they’ve found the net less often than United has this year. Though they are only 5 points back, and if they’re able to string together a few wins, anything is possible. 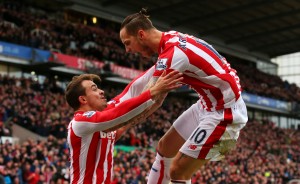 Stoke is an interesting team because they invested heavily in their squad this summer. Despite the investment they currently sit 10th in the table, and 7 points back of fourth. Like Crystal Palace, they have a tough finish to the season, heading to most of the same places Palace will be off too.

Can they do it? Possible. While they might have the same problem that Crystal Palace does, when it comes to competition, Stoke have been better as the season has gone on. Sitting only 7 points back of a top-four spot is impressive when you consider that Stoke didn’t register a league win until the seventh match of the season. Since their poor start, they have rebounded quite well. They’ve beaten Chelsea, Arsenal, Manchester United, and City, as well as a tremendous game against Everton. If the can continue this form against the sides ahead of them, then it’s not out of the realm of possibility that they could reach the Champions League. However, Their poor start affords them little room for error.

You might think this is cheating because they are currently in second place, and wouldn’t be out of place in an article assessing title probabilities. That being said, given what they accomplished last year, anyone who says they expected this kind of season from The Foxes is either lying, or named Gary Lineker.

YES! If Leicester win the @premierleague I'll do the first MOTD of next season in just my undies.

Can they do it? Yeah, probably. Leicester could have one of the toughest finishes to the season, with trips to all four of last year’s top-four sides. The good news for Claudio Ranieri’s team is that they’ve built up a 7 point gap between them and fifth. So, if they are able to keep that point gap up they should be able to stay where they are. Seemingly the only thing that could derail their top-four hopes is if some of their better players like Jamie Vardy and Riyan Mahrez are plucked away during this transfer window or injury. Though, considering their current standing, it’s very unlikely they will be selling. Realistically, all Leicester need to do from this point on is play quality football without a lengthy losing streak. If they can handle that it will be their very fist trip to the Champions League.