While Chelsea has won 12 straight matches to create some separation atop the Premier League standings, its two closest rivals meet at Anfield Saturday when Liverpool hosts Manchester City (12:30 ET, NBC). 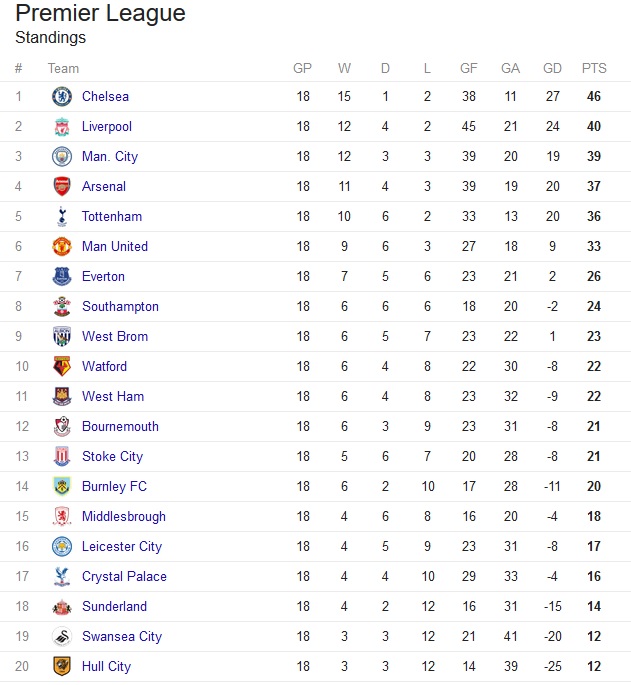 It’s a pivotal time of the year. The Premier League schedule is almost at the halfway point, and the transfer window opens again in a few days.

With the Blues showing little signs of slowing down, this match takes on added importance. Chelsea hosts Stoke City in an earlier match, so it’s possible that it could be nine points clear of Liverpool and 10 points ahead of Manchester City when this match kicks off.

Both teams are likely considering bringing in some reinforcements in the transfer window, but the wrong result in this match can ratchet up the urgency even more.

Liverpool could be in the market for a goalkeeper and a left back, but manager Jurgen Klopp isn’t giving anything away.

“If we think we have to do something, if there’s the player that can help us, not only in January, March, April, May and the season after,” he said this week. “Then we will do something. If not, then we won’t. I’m not sure it (January) will be important to us.”

City, on the other hand, could target a defender to help it cope with injuries to Vincent Kompany and John Stones.

Klopp and Pep Guardiola are no strangers to patrolling the same touch line, having squared off eight times in Germany while in charge of Dortmund and Bayern Munich, respectively.

The results? Four wins each.

Philippe Coutinho isn’t quite ready to return to the lineup, but he’s the lone major injury worry for the Reds. It will be interesting to see if Daniel Sturridge starts at forward after his strong performance off the bench last time out.

Guardiola will welcome back Sergio Aguero from a four-match ban, while Aleksandar Kolarov will probably slide into the center back spot vacated by the injured Stones.

City generally wants to dominate possession, but with its issues on the back line, it will be trying to keep the ball as often as possible — and keep the pace slow.

Klopp can read a team sheet, too, and you can bet that the “gengenpressing” will be on full blast as the Reds try to force the visitors into errors that lead to rushes on the City net.

It doesn’t seem especially likely that either team will keep a clean sheet, either.

Calling for a draw is always the safe play when picking matches, but if Chelsea handles Stoke at home Saturday morning, this will be a match that neither team can afford to lose.

That sets us up for a cagey affair, and something like a 1-1 draw.