In just a few short months, we will get to experience one of my favorite traditions that occurs about every other summer. No it’s not a major tournament such as the European Championships or the World Cup, it’s what happens right before that. I’m talking about when the English media completely overhypes the English National team prior to said major tournament, labels them as a favorite to win the whole thing, and then we all watch as the team hilariously fails once the tournament actually begins.

I’m not exactly sure why England gets overhyped every year. It probably has to do with the fact that the team usually draws a relatively easy qualifying group, so spirits are naturally high when they then dominate that group during qualifying. The other reason might be because the English team is filled with players that the English media have already spent a large amount of time over-hyping, calling many of them England’s next star.

When there’s a teenager ready to break into England’s senior team, the media loves to jump in and declare him England’s savior. On rare occasions, sometimes these players even live up to the hype (Wayne Rooney). On other occasions injuries get in the way of us ever finding out what they could have done (Daniel Sturridge, Jack Wilshere). Sometimes the media just gets it hilariously wrong and the player flops pretty quickly (Jack Rodwell), but most of the time the hype just becomes so much that there’s so much pressure the player can never really live up to it.

Obviously this media hype does more bad then good, but the English media simply can’t help themselves. It’s a vicious cycle, a new teenager burst onto the scene, has a solid England debut, and suddenly the media anoint him as England’s savior.

It’s a pattern that seems to constantly repeat itself. That is until now, because somehow that hasn’t happened to Tottenham midfielder Dele Alli.

Alli impressed last season with MK Dons in their 4-0 win over Manchester United in the League Cup. Last January in a very shrewd business move, Tottenham Hotspur signed the 18 year old for just £5 million before immediately loaning him back to MK Dons for the remainder of the season.

Alli joined Tottenham for the start of this Premier League season and the plan was to slowly expose him to the vigor of the Premier League. However Alli had no intention of taking things slow. He got a few chances early in the season and hit the ground running so fast that despite his youth, he quickly became a permanent fixture in Mauricio Pochettino’s squad. With his goal against Norwich, Alli now has seven career Premier League goals. That’s the same number as Jack Wilshere, who just happens to be the last 19 year old to have been declared England’s midfield savior by the English media. 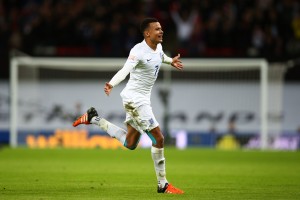 He earned his first England call up in November and made his debut in a friendly against France, where it took him just under 39 minutes to score his first international goal. So the question is, why hasn’t the English media latched on to him and begun to overhype him?

There are a few theories that can be used to answer this question. The first is, even when Alli came through the youth ranks, he was never seen as a rising star. By the time players like Wayne Rooney, Jack Wilshere, or Raheem Sterling were given their first England caps, they had already had moments as youth or Premier League players that had captured the nations attention. Alli on the other hand barely even played in the English national youth system.

He had played a few times for the U17 team, but had made just six appearances combined for the U18 and U19 teams. He was only called up to the U21 team in September, after having already made a few appearances for a Premier League club. At that point leaving him off would have been irresponsible, but when he was with MK Dons he wasn’t even being given a look by England’s youth teams. By international standards, he essentially came out of nowhere.

Another reason it’s hard to hype him is because despite his tremendous start, no one is really sure what position he plays. In truth, Alli is probably a box-to-box midfielder, a position that doesn’t seem to exist anymore with everyones obsession with the 4-2-3-1 formation.

Growing up, Alli was a boyhood Liverpool fan who idolized Steven Gerrard. He’s turned into a very similar player to Gerrard in the sense that for either of these players they didn’t really have a position that fit them perfectly. Playing them as a deep lying midfielder was irresponsible as they both have so much more attacking talent going forward. However, playing them simply as an attacking midfielder is also unfair because they bring so much more to the table. At the end of the day, it’s very hard to hype a player when you aren’t exactly sure where he fits into the team.

Dele Alli is the real deal and will thrill England fans for years to come. But right now, as fans of the game we should all be thankful that the media is laying off of him.