Group E looks to be like it could be anybody’s race for second. Brazil looks like the one that could top theç group, but other than that, the rest of the three teams could really make a competition to nab the other automatic spot. With Spain, South Korea (aka Korea Republic), and Costa Rica really impressing in the qualifying stages, not to mention with the growth of their youth systems, you could even say that they could give Brazil a run for their money as well. 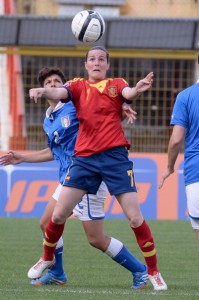 With Brazil being stacked with strikers and ladies who can score like Marta and Cristiane, many may overlook other scorers such as Natalia Pablos from Spain. Pablos plays for the Arsenal Ladies in England, just recently transferred from Bristol Academy. She burst into the scene in the qualifiers for the 2015 Women’s World Cup as she scored 12 goals in 10 games to lead Spain to the top of Group 2 in the European qualifiers for Spain’s first ever appearance in the Women’s World Cup. Pablos has proven she can score when she is needed most, and now it is her time to shine on the world’s biggest stage.

X-Factor in Group E: Is Brazil still as deadly even with their aging superstars?

It’s no doubt that Brazil is one of the stronger teams in Group E, but the fact of the matter is that Brazil’s superstars are aging, with several superstars such as Marta (29), Cristiane (30), Rosana (32) and Formiga (37) already at or almost reaching the age of 30. Meanwhile, most of the other squads in the group are relying on young talent to boost their performances as the rest of the three squads combined only have one player that’s over the age of 30. So the question is will the Brazilian ladies be able to keep up with a young, quick, and talented team such as Costa Rica? Or will experience truly win over inexperience and be a valuable asset for the Brazil ladies to move on in search of their first Women’s World Cup title?

This is going to be the game, in my opinion, that decides second place of Group E and that is why the match day three of Group E will be the most important game. It is really a toss up between Korea and Spain to battle it out for the second automatic spot in the group and this match up will be the deciding factor, that is if they both get a result as expected against Costa Rica. It will pit two high scoring offenses and stingy defenses, and it will probably be the most entertaining game of the group, so I say keep an eye on the last game of the group stage.

Teams To Automatically Move On: Brazil and Spain

Brazil is an automatic (presumably) lock to at least advance to the knockout stages of the tournament so that leaves one spot open and that spot is going to Spain. Costa Rica might surprise people, but with mostly a young squad to work with, I don’t expect the Costa Ricans to move on. Korea Republic looks like a force to be reckoned with, but I believe that Spain is too strong on both sides of the ball to not advance to the next round. I have Spain beating Korea in the last game to gain the one-up on the Asian team, in what I called the crucial match up to decide who advances, and with proven leaders like Vero Boquete and newcomers like Natalia Pablos; Spain looks like a lock for second place of the group.