Mid January is the time of the month where transfer news tends to slow down. The big rumors that are thrown around at the excitement of the transfer window opening have quieted down, and the frantic last minute pace of the closing of the window hasn’t yet begun. However there is still some major news out of transfer land this week to get us started.

The big news of the day is that Real Madrid and Atletico Madrid have been handed a one year transfer ban for signing underage players. It’s relatively the same punishment that Barcelona had received over the past year, which hasn’t exactly effected them as they won the Champions League and are still right in the thick of things this year.

This is big news if you’re a fan of having David de Gea or someone like Harry Kane playing for your team. Obviously when young players like Kane rise up through the ranks, they are inevitably always linked with Real Madrid, but at least Spurs fans can take solace knowing that Real won’t come calling for Kane for at least another year. As for de Gea, following the transfer fiasco lasts summer, I genuinely thought that United had convinced him to sign a new contract with the promise that they would sell him after this season. Whether or not that’s true, United will have the Spanish goalkeeper for at least another season.

Jordan Morris will extend his trial at Werder Bremen

Great news for USMNT fans that want Morris to sign overseas instead of in the MLS. Morris was originally supposed to be on a 10 day trial with the German club but after impressing there, the trial has been extended. Bremen wouldn’t be extending this trial unless they had really serious thoughts of signing the US striker, and by accepting to extend Morris is signaling that he very well could sign with the Bundesliga club.

According to a report by Marca, Adidas wants Lionel Messi and Pep Guardiola to reunite next season at Old Trafford

Considering they’re just a shirt company, Adidas has made a lot of noise recently. Last week they spoke out about not liking Manchester United’s style of play, and this week they’re telling us who they want to see manage United and what players they want to come in. United signed the biggest shirt deal in the world with Adidas last summer, and combining the biggest player in the world with the biggest club in the world has Adidas seeing dollar signs. Let’s not forget, this is simply a best case scenario for Adidas but not a realistic scenario. 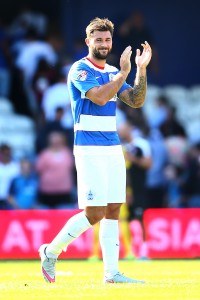 LONDON, ENGLAND – AUGUST 22: Charlie Austin of QPR acknowledges the crowd after the final whistle during the Sky Bet Championship match between Queens Park Rangers and Rotherham United at Loftus Road on August 22, 2015 in London, England. (Photo by Jordan Mansfield/Getty Images)

I mentioned this a few weeks ago that it just made no sense that Austin was still in the Championship when several Premier League clubs could use. Well now it appears Watford are the team that are going to go down and get him, which is interesting since Watford are not at the top of the list of teams that could use another striker. Nevertheless, having depth at the striker position is a good thing and a player like Austin could certainly help Watford try and capture a Europa League spot.

Chelsea have made a £40 million bid for Real Madrid midfielder Toni Kroos, with Manchester United and Liverpool also interested according to The Daily Star 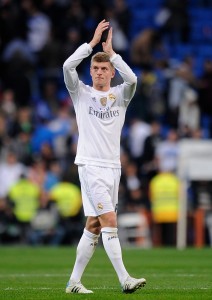 Kroos is reportedly unhappy with the amount of playing time he’s been getting at Real Madrid this season and could be open to a move. The only reason I give this rumor some legs is due to the reports that Chelsea have actually made a bid and are willing to try and go out to get the player now. Combine that with Real’s upcoming transfer ban and their interest in Eden Hazard and suddenly it looks like Real could be eager to try and organize a swap sooner rather then later. Of all the big names that get ridiculously thrown around in January, this one actually seems like something can come of it.

It’s been no secret since the day that Louis van Gaal took over Manchester United that the club has needed new center backs. Despite that van Gaal has allowed three transfer windows to go by without actually signing a new central defender. The club badly needs depth at the back as they’ve been playing with holding midfielder Daley Blind as a first choice center back nearly the whole season. The last center back United signed from Easter Europe was a man named Nemanja Vidic, that worked out pretty well for the club so fans can only hope Dragovic can do the same.

The Sun is reporting that want away West Brom striker Saido Berahino may have to stay at West Brom as Spurs are unwilling to pay the £23 million West Brom are demanding for the striker, though according to The Times Stoke are set to move for the striker and believe they can get him.

I’ve said numerous times Berahino to White Hart Lane just doesn’t make sense as he would clearly be the second choice behind Harry Kane in a one striker system. Stoke on the other hand can use some strikers, and with the form they’ve showing over the past few weeks, Berahino could become a great asset for them. It will be interesting to see how this develops over the next week.

We’ll be back next week to recap the latest wave of rumors.