The transfer window is now underway and clubs are wasting no time starting the wheeling and dealing. There have been plenty of moves so far but nothing major, however that hasn’t stopped the big names from constantly appearing on the rumors of the back pages, despite the fact that most of them won’t even consider moving until the summer. Once again it’s time to rate their legitimacy.

Liverpool have confirmed the signing of Serbian 19 year old Marko Grujic for £5.1 million from Red Star Belgrade. The teenager will return to Red Star for the remainder of the season on loan.

We’ll start off with a confirmed deal as Marko Grujic is set to become the answer to the trivia question “who was Jurgen Klopp’s first signing at Liverpool.” These moves where big clubs sign young players and loan them back to their clubs are pretty common as they are very low risk, high reward. But the thing about them is that player rarely ever catches on at the big club. Odds are, Grujic will never break in to the Liverpool first team and will just end up being forgotten among what Liverpool fans hope will be far more successful signings.

A lot of news about Eden Hazard this week as The Daily Mail is reporting Eden Hazard will definitely be leaving Chelsea. The Sun isn’t as definitive, claiming Hazard is simply waiting to commit his future to Chelsea until the club names a new manager. 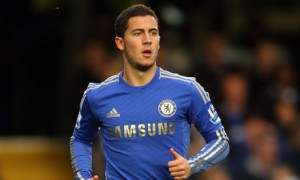 For as much as many transfer rumors come out of left field, I’m a big believer that where there’s smoke there’s fire and there is a lot of smoke around Eden Hazard. Add that to the stories that Hazard is a big admirer of new Real Madrid manager Zinedine Zidane and that the interest is mutual, and suddenly there are plenty of reports saying that Real and Chelsea could be working out a swap deal between Hazard and Bale. Nothing will come of this in January of course as the players are both cup-tied in the Champions League and Hazard is injured at the moment, but this story has just enough legs that it’s worth monitoring over the next few months.

Metro is reporting that Arsenal are very interested in Watford striker Troy Deeney, though The Mirror has claimed Deeney insists he will not be leaving Vicarage Road and that Watford have “a project to complete.” 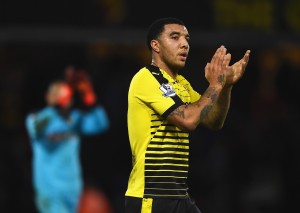 This is your classic January transfer story that could certainly happen. Young striker impresses over the first half of the season at a small club, then a big club offers him a nice pay raise to come and most likely be a backup for them. The move makes total sense for Arsenal as they’ll add depth, but doesn’t make much sense for Deeney as he’d likely be Arsenal’s third choice striker. Nevertheless, this is one you can’t rule out. Despite Deeney saying he wants to stay at Watford, he is a boyhood Arsenal fan, and if the club comes calling with enough money, anything can happen.

Click below for rumors on Ronaldo, Bale and Jordan Morris.