It’s no secret that the United States men’s national team has struggled along the backline for some time now. No position gave away the 2015 CONCACAF Gold Cup than what took place at center back in July, and the problems have only extended since then.

The reality is, something needs to change in order for this team to begin its 2018 World Cup qualifying campaign and preparations for a likely appearance in Russia. With the future in front of this group, perhaps it is time for Jurgen Klinsmann to start anew in the problem spot on this roster.

One can talk all they want about the lack of goals being scored, but soccer starts and ends with an effective back line of defense. It all starts with an ability to not only bottle up the opposing attack, but to be the first line of transition in to your own attack.

Klinsmann has been more and more focused on playing a possession-movement based system. It’s a system that requires defenders to be not only good positionally, they need to also be able to add something in link-up play with the rest of the team.

The German-born manager no doubt knows the style that world-class teams play with and there’s no doubt he wants to see his team play that way. However, the results of the last year-plus point out that perhaps the United State just doesn’t have the players in the back line ready to step up and take on the roles needed.

At least, that seems to be the case given the current crop of players Klinsmann has repeatedly trotted out along the back line over the past nine-plus months. Timmy Chandler has been a favorite for a call-up to the national team, but has not exactly been available when needed most due to injury. He also hasn’t lived up to billing as an effective link-up player up the wing.

In fact, Chandler has been much more effective as an outright defender than as a wing player out wide in defense. 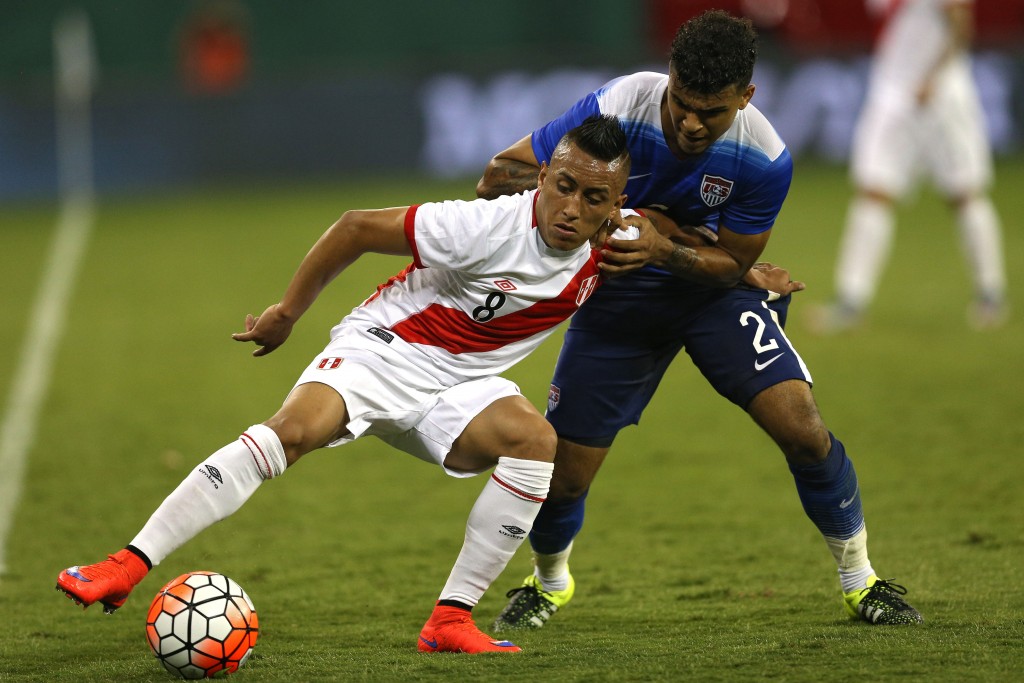 WASHINGTON, DC – SEPTEMBER 04: Christian Cueva #8 of Peru and DeAndre Yedlin #2 of the United States battle for the ball in the second half during an international friendly at RFK Stadium on September 4, 2015 in Washington, DC. (Photo by Patrick Smith/Getty Images)

It doesn’t mean that all is lost for the entire crop of current players though, as we all saw the promise a bit last summer in youngster DeAndre Yedlin. He played up the wing as a fullback, and continued to do so through this transfer to Tottenham Hotspur and now his loan spell to Sunderland.

Yet, since last summer, Yedlin’s role on the USMNT has increasingly been about the offensive side of the game, in hopes of sparking something in attack up the flank.

That’s well and good, but Klinsmann also hasn’t been willing to move towards allowing Yedlin to affect the game as a box-to-box defender from the right side of the pitch either. If you want to play possession-movement soccer, having your left and right defenders playing more as attacking fullbacks is exactly what a manager should be looking for.

In the middle of defense, things have been even worse. Veterans like Omar Gonzalez and Matt Besler have just never put it together despite experience and talent at the club level. Instead, the two have arguably been amongst the Achilles heels of this team since the summer.

Experiments like Michael Orozco, Tim Ream and Ventura Alvarado haven’t exactly lived up to billing either. Ream has failed to impress to the point that DeMarcus Beasley, the aging wonder, continues to be on the fringe of this squad with his fleeting speed and cunning working in his favor.

The point of all of this? Where in the past nine months has been the forward thinking for a group that clearly needs an overhaul. Tuesday night’s disaster against Brazil was just the straw that broke the camel’s back, but even the performances against Peru before it and certainly all Gold Cup long have shown enough to know this group as it currently is made up needs a severe overhaul.

As in, most of them shouldn’t be seeing the field in a USMNT kit for quite awhile. It isn’t as if the USMNT has much to lose in the back line these days. It can hardly get worse than what we’ve seen.

However, where is that change going to come from is perhaps the questions puzzling not just us, but Klinsmann as well. After all, there’s been very few if any change in the names in camp, just more like recycling names that have failed in the past and still come back for more.

If Klinsmann is serious about his tactics and wants the future to be bright, here are a few defensive-minded names he better be considering:

Matt Miazga, Steve Birnbaum, Perry Kitchen, and Shane O’Neill — names that are all from (or just recently from) the Klinsmann-hated Major League Soccer. However, league aside, these are all younger names that have shown up in big ways for their respective clubs. 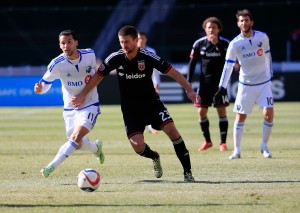 WASHINGTON, DC – MARCH 07: Perry Kitchen #23 of D.C. United and Dilly Duka #11 of Montreal Impact go after the ball during the first half at RFK Stadium on March 7, 2015 in Washington, DC. (Photo by Rob Carr/Getty Images)

The elder statesman of this group is no doubt D.C. United defensive-midfielder Perry Kitchen, yet he is just 23. However, when you think of the good USMNT lineups in the past, they’ve always included gritty defensive midfielders willing to do the hard work. Whether that was Earnie Stewart in the 1990’s or Frankie Hejduk in 2002 or Pablo Mastoreni and Kyle Beckerman in more recent memory.

Kitchen has shown to be that type of gritty and unafraid player for his club side since his rookie season, and his linking play with the back line has been key to whatever success United has had over the past few years.

Kitchen is no where near the athlete of Jones, but he could be slotted in to a few different roles as this squad looks to transition away from the aging Beckerman and Jones as defensive-mid options.

He’s clearly on Klinsmann’s radar, making his first two appearances for the senior national team following his call-up to the January camp. Yet, he hasn’t been part of the set up since. It may be the reset that is the January camp before things are shaken up once again, but Kitchen has performed well enough at the club level to warrant a much more serious look as the future of this team at defensive-mid.

His teammate with the Black-and-Red, Birnbaum, has been a pleasant surprise since his arrival as D.C. United’s 1st round pick in the 2013 MLS Superdraft — not exactly the route most are taking to national team call-ups these days under Klinsmann, but one that is working for Birnbaum.

Birnbaum is very good in the air, isn’t afraid to mix it up and plays well with the ball at his feet for a defender. In fact, some indicate distribution out of the back as being one of his strongest suits. Given what we’ve all seen lacking, it sure sounds like a player worth giving a crack at the USMNT roster. 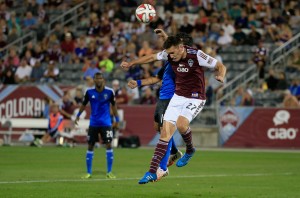 COMMERCE CITY, CO – SEPTEMBER 27: Shane O’Neill #27 of Colorado Rapids battles for control of the ball with Matias Perez Garcia #11 of San Jose Earthquakes at Dick’s Sporting Goods Park on September 27, 2014 in Commerce City, Colorado. The Earthquakes and the Rapids played to a 1-1 draw. (Photo by Doug Pensinger/Getty Images)

O’Neill might be the name that needs the biggest look in the coming months, as he recently completed a move to Royal Mouscron-Péruwelz in the Belgian Pro League. American’s have ahd mixed results with moves to Belgium, but O’Neill is an interesting case as he holds both American and Irish citizenship and has been on the fringe of a call-up and action at the senior level for the USMNT in the past.

However, an eye injury caused him to miss the 2013 FIFA U-20 World Cup for the United States and he hasn’t been around the senior set up just yet. His versatility as a central defender and possibly a defensive midfielder helps, although a look at his film suggests he is much more comfortable directing things at the back than as a linking player in the midfield.

No one player is talked about more as a needed call-up than Miazga, who has torn it up since being inserted in to the starting lineup as a central defender for the New York Red Bulls. He’s been a stalwart in the middle of the defense ever since his debut at the age of 18. He’s now just past his 20th birthday, and while he’s young, there’s little denying his talent level and future as a potential star at the international level.

The real question is, why hasn’t Klinsmann locked him down to the USMNT just yet? Miazga has played at the youth international level for both Poland and the United States, choosing to play a part in the 2013 U-20 World Cup that O’Neill missed out on. Klinsmann has been quick to pull the trigger on caps for young international players with dual-citizenship and given the absolute need for fresh faces in defense, how Miazga hasn’t received a call up is puzzling.

Clearly there are options for this squad, the question is just which ones will Klinsmann choose, if any?

For now, it appears the USMNT may be stuck with what it has defensively, unless Klinsmann wants to be bold and look towards the real future for the 2018 World Cup in Russia. If not, then it may be time Klinsmann starts understanding the limitations of the roster he currently has and finding a way to get the most out of that group.

Style can win matchups, but knowing what you have and who you really are is equally as important. Figuring out what to do with the back line over the next year-plus is going to be key to the hopes of the USMNT making a run at another World Cup, which after the last few months certainly doesn’t seem like the given most have come to think of.