On Monday, the USA defeated Colombia 2-0. While Colombia never mounted a significant attack or shot on goal, the victory was a bit unconvincing. After all games thus far, critics have pointed out America’s shaky play. Primarily, the reason for this criticism is twofold: an overreliance on playing long balls to Abby Wambach, and the lack of creativity from any players outside of Megan Rapinoe.

Megan Rapinoe and midfielder Lauren Holiday will not be playing this Friday due to yellow card accumulation. Let’s be real—both yellows was very light, but it is what it is. Rapinoe likely deserved her’s on foul accumulation alone, not to mention her somewhat obvious earlier yellow versus Australia.

The absence of these two, quite simply, is not good. Rapinoe is absolutely critical to the US club, serving as a lone creative force and was absolutely everywhere on defense versus Colombia. Holiday is part of the US’s much maligned midfield, but she’s also the player who would be most likely to take over Rapinoe’s playmaking duties.

US Soccer fans should be a little nervous heading into Friday’s tough game versus China. They should also feel about like Julie Johnston feels in this gif. 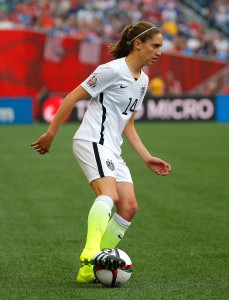 WINNIPEG, MB – JUNE 08: Morgan Brian #14 of the United States of America against Australia during the FIFA Women’s World Cup Canada 2015 Group D match between the United States and Australia at Winnipeg Stadium on June 8, 2015 in Winnipeg, Canada. (Photo by Kevin C. Cox/Getty Images)

What does that leave for Head Coach Jill Scott to do? How does Team USA replace two important cogs to the #2 team in the world?

Brian has already played some in this World Cup, coming on as a last-minute sub against Australia and for the last 20 minutes against Colombia. Both times, Brian slotted into winger positions. Look for Brian to sub into Holiday’s midfield slot, possibly as a more attack-minded threat alongside Carli Lloyd.

2. Christen Press & Tobin Heath (Nearly 100% Certain to be a Starters)

Press has played in 3 of Team USA’s 4 games thus far, twice as a starter. However, she has yet to play more than 68 minutes in any game. Look for Press on the right and Heath on the left playing out wide. Neither have really impressed creatively thus far, to look for both to push hard in the first half against China to get their creativity going. These two are the (likely) future of this team. Now they have an opportunity to put their stamp on a World Cup victory. 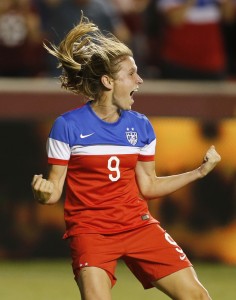 She hasn’t played yet, but O’Reilly brings the type of veteran creativity and fire this club might need. Team USA has looked a bit lost out there at times creatively. The strategy is twofold: ping crosses as Abby Wambach’s head, and give the ball to Rapinoe to do that magicky-thing-that-she-does. O’Reilly has been with this team since 2002, and this is her third World Cup. She wants to play badly; we’ll see if she gets her chance.

Leroux and Rodriguez are forwards, yes, but with the absence of two creative midfielders, it’s possible that Coach Scott could play either of them as a wide midfielder at this stage. Leroux in particular has not found her form yet this tournament. Getting her on the field at the same time as both Wambach and Morgan could be overkill or playing with fire, but it could also be a stroke of 4-3-3 genius.