32 Flags is pleased to bring you coverage of the Copa MX, the domestic cup of Mexico, and we will be following the Cup games until a champion of the Apertura season is decided. In case you aren’t familiar with Mexican soccer, the Copa MX is composed of teams from the Ascenso MX and the Liga MX (the second and first divisions of Mexico, respectively).

A few details about the structure of the Copa Corona MX (Corona beer sponsors the cup):

With that said let us recap the first leg of the first round in Copa play. 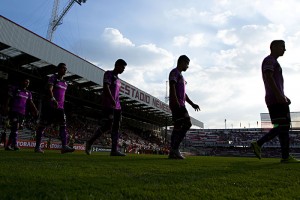 Golazos of the Week (Copa Edition):

Nifty footwork by Amando Moreno and the smart decision to leave the trailing ball to Paul Arriola leads to a magnificent team goal by Xolos.

Wow, the bend Tapia gets on this ball is insane. Goal of the Copa so far.

“El Pitu” Ceja’s free kick might have been deflected on it’s way to the net, but this goal to bring the game level for Monarcas was still clutch.