Love him or hate him the one thing you don’t want to see is a star player forced to leave a major final with an injury. Especially when that injury comes early in the game and can have a major effect on the rest of the game. 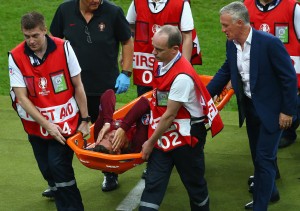 PARIS, FRANCE – JULY 10: Cristiano Ronaldo of Portugal shows his emotion while being taken off by a stretcher during the UEFA EURO 2016 Final match between Portugal and France at Stade de France on July 10, 2016 in Paris, France. (Photo by Alex Livesey/Getty Images)

That’s exactly what happened to Cristiano Ronaldo. The Portuguese superstar picked up a knock on his knee in the eighth minute of the match. To his credit Ronaldo tried to carry on playing not once but twice.

Finally in the 25th minute Ronaldo succumbed to his injury and was stretchered off the field.

It’s a massive blow for Portugal who now have to play a majority of the match without the man their team is built around.