With this being the last international break before this summers European Championships in France, many of the participants will be ironing out the final kinks in their teams with a few friendlies this week. Barring a few injuries here or there, it’s safe to assume that the players that were called up to their national teams for these friendlies will be the ones representing their countries in France.

Even though form can change and injuries can happen, why not take a look at some of the favorites for this years tournament and get a way too early preview. I’m sure this won’t look dated in two months.

They should see an upgrade from 2014 at the goalkeeper position, but the keyword there is should. David de Gea would be a massive upgrade over the aging Iker Casillas, who struggled in 2014, but at this point Casillas is still the team’s captain and Vincente del Bosque hasn’t exactly implied that de Gea would be taking over this summer. It could be a short summer if a change isn’t made.

If de Gea does get the number one shirt then Spain’s biggest test will be in the midfield. I’m not saying players like Cesc Fabregas, Juan Mata, Koke, Isco, and Thiago aren’t talented, but this is a far cry from the Xavi, Iniesta, Xabi Alonso, and Sergio Busquets midfield that was at the heart of the Spanish midfield during their tremendous stretch that saw them win three straight major tournaments from 2008-2012. That was a world class midfield that’s not easily replaced.

Verdict: They’ll make a run, but don’t expect them to be in the final.

Don’t get me wrong, this is a loaded squad. Mesut Ozil, Marco Reus, Mario Gotze, Thomas Muller, Toni Kroos, and Sami Khedira is a scary good midfield. I’m a little less high on Germany this time around though because of my Champions League belief. 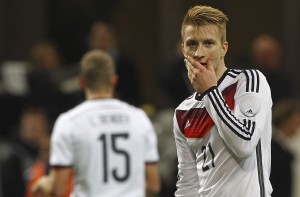 MILAN, ITALY – NOVEMBER 15: Marco Reus of Germany shows his dejection during the international friendly match between Italy and Germany at Giuseppe Meazza Stadium on November 15, 2013 in Milan, Italy. (Photo by Marco Luzzani/Getty Images)

Sometimes you can predict what will happen in Europe by looking at the Champions League either the year of or the year before the tournament, especially when one team composes most of the national team. For example, the 2008-2012 Spanish squads were made up primarily of Barcelona and Real Madrid players, with the midfield being very Barcelona heavy. Barcelona dominated the Champions League during that time and it carried over.

I took one look at Bayern Munich dismantling Arsenal in 2014 and immediately knew Germany would win the World Cup. That team was primarily Bayern Munich and Borussia Dortmund players (who just happened to play each other in the Champions League Final in 2013) with the midfield being mostly Bayern Munich players. But these days, Bayern’s midfield is more international and the German players are scattered around the world. They still have loads of talent, but is the chemistry still there?

Verdict: They still have every chance to win this thing, but there’s a reason why you rarely see teams win the World Cup and Euro’s back to back.

Back in November I was very high on England mainly because all their players were in form. These days, it’s much less so. They do have very young midfielders and forwards that can go toe to toe with anyone but after that, their defenders and their depth are very lacking. There are still a lot of questions that need to be asked of Roy Hodgson’s squad, like how will they line up? Where does Wayne Rooney fit? Will Hodgson pick veterans like Theo Walcott or Danny Welbeck instead of a player like Ross Barkley who has far more upside? 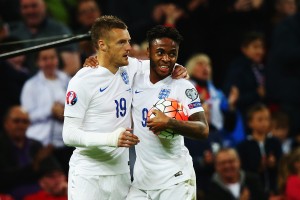 during the UEFA EURO 2016 Group E qualifying match between England and Estonia at Wembley on October 9, 2015 in London, United Kingdom.

If they put their best midfielders and forwards on the field (which in my opinion is Dele Alli, Eric Dier, Raheem Sterling, Ross Barkley, Harry Kane, and Jamie Vardy or Wayne Rooney) this team can compete with anyone especially as they’re young and won’t be burdened by England’s previous history. But if someone gets hurt and they have to go to the reserves, it’s a pretty big drop off.

Verdict: If Hodgson gets it right and they stay healthy they can make a run, certainly to the quarterfinals and maybe even the semi-finals before losing on penalties.

The home side has a lot of bad recent history to overcome. They failed to make it out of the group stage in the 2010 World Cup and had a pretty poor showing at Euro 2012, but France made the Quarterfinals of the 2014 World Cup and this is a new and different France team from four years ago. It’s a far different group then the ones that came up short in recent tournaments. They’re younger and they’re far more talented.

This is a France team with a fantastic goalkeeper, a great defense and a midfield and attack force that are downright scary. Paul Pogba, Blaise Matuidi, and Leicester City star N’Golo Kante can patrol the midfield and allow the likes of Dimitri Payet, Antoine Griezmann, Anthony Martial, and Kingsley Coman to run free and do their thing. And I didn’t even list everyone.

This isn’t your older brother’s France, this is a very new and very good France side, that will have the home fans behind them.

I’ll keep it short about the team the team ranked #1 in the world in the FIFA rankings. Overrated.

They’re a young team that played pressure free in 2014 and now the pressure is on them. Star player Eden Hazard has been on terrible form this year. Marouanne Fellaini has been terrible this year and Adnan Januzaj can’t even buy a club match these days. Big players Vincent Kompany and Kevin de Bruyne will both be coming off injuries that plagued them all year. If they’re healthy, that defense is one of, if not, the best in the tournament, but that midfield needs to find its form quick.

There’s always one big team that goes home earlier then expected to make way for an out of nowhere smaller club. That big club will be Belgium.

Verdict: Sell on Belgium. If everything falls their way their ceiling is the Semifials, but likely not getting past the Quarterfinals.

Are we really still doing the whole pretending Portugal is good thing? They can rise all they want in the ridiculous FIFA rankings by winning friendlies and their qualifying games. However when it comes to this team, it’s still Cristiano Ronaldo surrounded by a bunch of players who wouldn’t start for many of the top European teams. This always gets exposed when they go to major international tournaments. Ronaldo can only take them so far by himself.