Finally, after a lengthy hiatus, the UEFA Champions League is upon us and we have some appetizing matches to preview as teams will battle to reach the quarterfinals. 32 Flags will focus on this week’s matches to see what we can expect from each game.

Benfica comes into this match limping, and I don’t mean they have had a string of bad results. They come into this game with five key players out with an injury that include: their captain Luisão out with a broken arm, key forward Nuno Santos has been ruled out with an unspecified injury and defender Lisandro López is out with a thigh injury. Most of the Benfica injuries have affected their backline so look for the speedy Zenit forwards to test what will be a untested Benfica backline.

Zenit will try and make the most of Benfica being so shorthanded and will have an advantage of sorts in that Axel Witsel, Ezequiel Garay and Javi García, all former Benfica players now playing for Zenit, will come back to try and get an advantage in Lisbon to bring back to Russia. 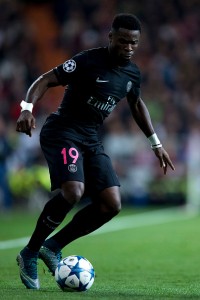 The big news coming from the PSG camp is the suspension of right back Serge Aurier, who has been solid for the Parisian backline up until his suspension. In case you have been out of the loop, Aurier was suspended by PSG for going on a homophobic tirade on Periscope where he made derogatory statements about his manager — along with teammates as well. Aurier has since apologized, but that did not spare him from the suspension for this match. Look for Gregory van der Viel to replace Aurier at right back, as he started at that position against Lille. PSG will also be without Ezequiel Lavezzi who is out with an unspecified injury, and might be without Javier Pastore who is dealing with a hamstring injury.

Chelsea will also have to deal with players that have picked up some knocks as captain John Terry will miss the match with a hamstring injury he suffered during Chelsea’s 5-1 win over Newcastle. To add to their defensive woes Chelsea will have to deal without Kurt Zouma as well, meanwhile Oscar is probable to start after recovering from a calf injury. However, Chelsea have brought their new American signing, Matt Miazga, to Paris and we might see the former New York Red Bull play his first minutes with Chelsea.

The Cinderella of the tournament is most certainly Gent, who are making their debut in the Champions League and have reached the round of 16 so far. Certainly impressive from the Belgian champions, but they face a daunting task in facing Wolfsburg, who won a tough group that featured PSV Eindhoven and Manchester United.

However, Wolfsburg has been out of sorts lately as their 2-0 win on the weekend over Ingolstadt was their first in six and it ended a seven-game winless streak in the Bundesliga. Meanwhile, Gent has only lost three out of their last 11 and are tied with Brugge for first place in the Jupiler League. It will be interesting to see if Gent can continue their Cinderella run and take advantage of a Wolfsburg team that is struggling, and might be without André Schürrle (groin), and get a crucial result in Ghent.

Real Madrid may be three superstars less against Roma as Gareth Bale (calf), Marcelo (shoulder) and Pepe (foot) have been listed as doubtful in their game against Roma. Real Madrid fans are not worried as Cristiano Ronaldo has been stepping up as of late, as he has scored 19 goals in his past 14 games, as has Karim Benzema, scoring 16 in his last 12 matches. Not to mention that the team has not lost a game under new manager Zinadine Zidane, and that adds to the confidence los Merengues have to get a result to go back to the Bernabeu with an advantage.

Don’t count out scrappy Roma, however, as they have only lost one of their last 13 matches played. But, seven out of those matches have ended in draws for the team from the capital, so they will really need to be firing on all cylinders if they dream of beating Real Madrid. It will be a difficult task if they are without the services of De Rossi (calf), Salah (thigh), Torosidis (thigh) and eternal captain Totti (calf) who are listed as doubtful.