Last season marked the second time in three years that no English club made it to the quarterfinals of the UEFA Champions League. The Champions League group stage got underway this week and the English clubs picked up right where they left off in last years competition – by losing.

Three of the four Barclays Premier League teams, Manchester City, Manchester United and Arsenal, lost their opening group stage match with Chelsea being the only club to pick up a win. Were all these results merely a fluky coincidence or is this a sign of greater things to come?

Of all the English clubs, Manchester City’s match with Italian giants Juventus was easily the most difficult. City came into the match in terrific form, winning all five of their Premier League fixtures without conceding a goal. Despite taking on a Juventus side that came into the match in pretty poor form (two losses and a draw in their first three matches) City’s loss wasn’t exactly out of nowhere.

City entered the match without top striker Sergio Aguero, and although they both played, Raheem Sterling and David Silva both had injury concerns prior to the match. Even though Juventus got off to a poor start domestically, they’re a team that always seem to raise their game when playing in Europe, and we’ve seen before that sometimes domestic form has no effect on European form (looking at you Dortmund!). On the other side of the spectrum, City are historically a pretty poor team in the Champions League. They’ve been in the competition four times but only made it out of the group stage twice, and last year that was only thanks to a near miracle. 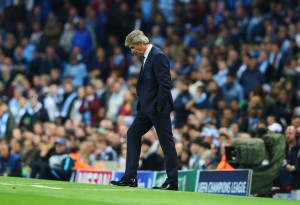 during the UEFA Champions League Group D match between Manchester City FC and Juventus at the Etihad Stadium on September 15, 2015 in Manchester, United Kingdom.

It wasn’t all gloom for Manchester United on Tuesday as youngsters Memphis Depay and Anthony Martial both looked very good against Dutch opponents PSV Eindhoven. United were undone in the first half when Luke Shaw suffered a double fracture in his leg, forcing him to come off. This forced Louis van Gaal to re-shuffle his back four for the first time this season and a lack of communication can definitely be part of the blame for PSV’s second goal.

The Gunners have been perhaps the most perplexing team at the top of English football this season. They’re finally fully fit but they’ve never really seemed to get going this season. They lost at home to West Ham, played a goalless draw against a Liverpool side that couldn’t get anything going, and barely survived by the skin of their teeth against Crystal Palace and Newcastle. They finally got a good performance this past weekend and followed that up with a loss against Dinamo Zagreb. Still, there’s not too much to be ashamed of, traveling to Eastern Europe is never an easy feet and going down to 10 men in the first half when already down a goal was always going to make it a tough challenge.

Ironically it was Chelsea, the team coming in with the worst domestic form, that pulled out England’s only victory this week. Did it help that they were playing arguably the worst team in the competition in Maccabi Tel Aviv? Of course it does! Will the win give them confidence ahead of their match against Arsenal this weekend? Sure, but I still don’t think they’ll win since their squad depth is paper thin.

As you can see, there are valid reasons for why all three losses happened leading which can easily be chalked up to a fluke in that they all happened at the same time. However when you look at the bigger picture I do believe this is a sign of things to come.

It’s not a coincidence that last year was the second time in two years that an English club failed to make the Quarterfinals. Gone are the days where England sent at least one representative to the Final seven times in eight years from 2005-2012. The new normal is English teams struggling in Europe.

There’s a simple reason for this. The Premier League’s massive TV contract has pumped so much money into the league that even clubs at the bottom of the league can outspend top clubs of other European leagues, making the Premier League significantly deeper then anyone else. Clubs like Leicester City, who finished 14th last year, now have the money to sign quality international players like Gokhan Inler away from clubs like Napoli, who finished 5th in Italy last season.

The result is there are no easy games in England anymore. Managers don’t have the luxury of being able to rotate their squad ahead of their European matches and still be able to cruise towards those three points.

Take Bayern Munich last weekend for example. While they didn’t necessarily rotate their squad last Saturday against Augsburg, they certainly weren’t exactly giving 100% either. The team coasted through the first 75 minutes of the match, turned it on for the final 15, scored two goals and went home with three points. Meanwhile Manchester City was battling right until the end with Crystal Palace only getting their breakthrough winning goal in the 90th minute.

While I am expecting English teams to struggle, it certainly was a little unexpected for it to happen in the group stages, where typically the teams they face are weaker and the rigors of a rough season have yet to wear on the clubs. From that standpoint, you can chalk this week up to just being a fluke. However, once the knockout rounds come around, don’t expect to see the English clubs winning with the regularity that they used to.