Soccer is much different than the other major American sports because the jerseys are always being tinkered with each and every year with new features and new designs.  Could you imagine adding a dash of black to the Green Bay Packers or a hint of blue with the Boston Red Sox?  What it allows for is great interest in the way each team will look for each tournament (and, honestly, a great opportunity for jersey sales to always remain high as hardcore fans are desperate to get a hold of their team or country’s latest look).

While we are definitely interested in how the teams will perform at the 2014 World Cup in Brazil, we’re also interested in how they will look once they take the pitch.  There’s a rich history with so many of these national team shirts and each country’s identity can be seen through their kits, which also double as a fashion statement for the soccer fan with an eye towards the latest trends.

Below we’ve ranked all the home jerseys for the 2014 World Cup from #32 all the way to #1.  Feel free to leave a comment disagreeing with our selections and wondering what in the world gives us the right to try to break down fashion.

All the images for these jerseys come from World Soccer Shop unless otherwise noted. 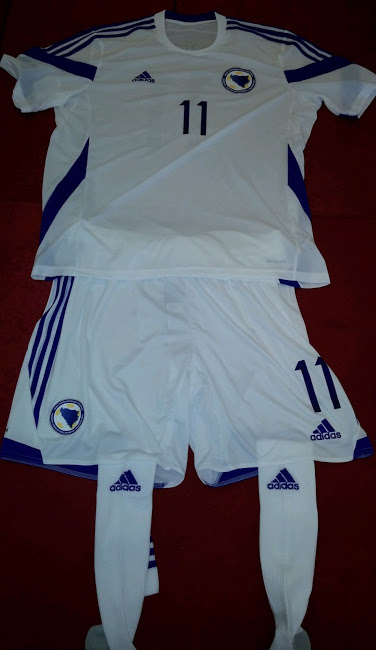 Bosnia and Herzegovina will be making their first ever World Cup appearance in the least inspired shirt.  There’s nothing wrong with a traditional plain white look, but the thick blue diagonals are just plain strange. (via Footy Headlines) 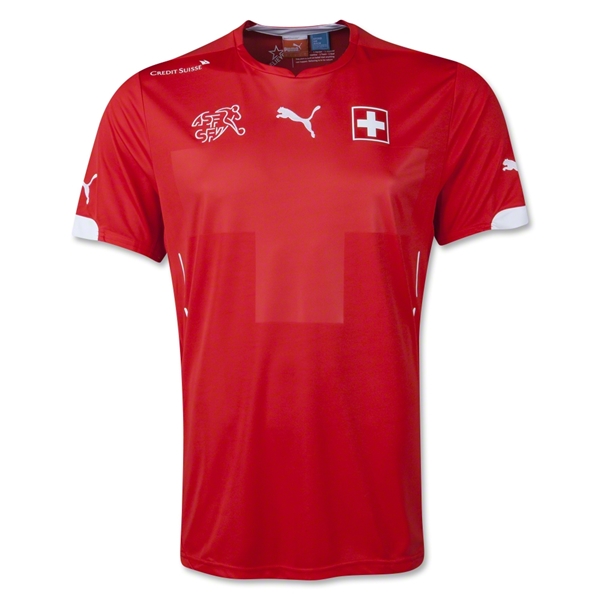 The Swiss jersey gets pinged for a couple of reasons.  First, the sponsorship from Credit Suisse on the right shoulder is unusual.  While sponsorships on club shirts are plentiful, it’s rare to see them on a national jersey.  Secondly, the embossed cross on the front is just noticeable enough to be a distracting eyesore. 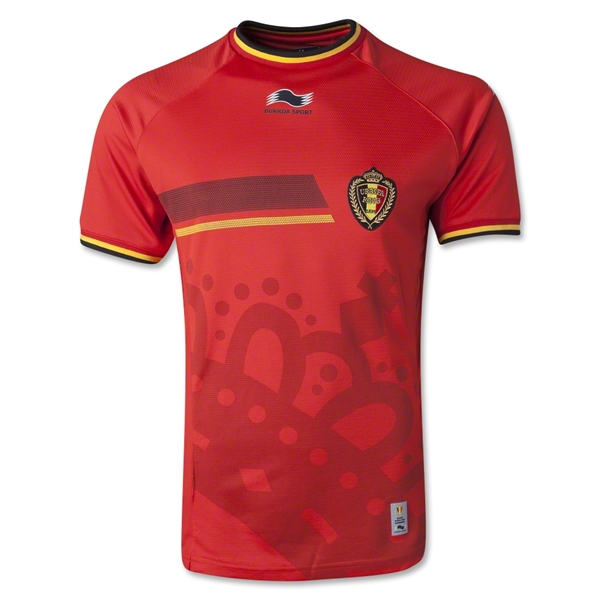 WEIRD EMBOSSMENTS ARE THE FASHION TREND OF 2014!!!  Belgium is a popular dark horse pick for the 2014 World Cup, but unfortunately we can’t say the same thing about their jersey.  There is a LOT going on here with the horizontal stripes that don’t go all the way across the front and the diagonal Belgian crown that dominates the rest of the shirt.  The away black kit with the two-colored sash is far superior. 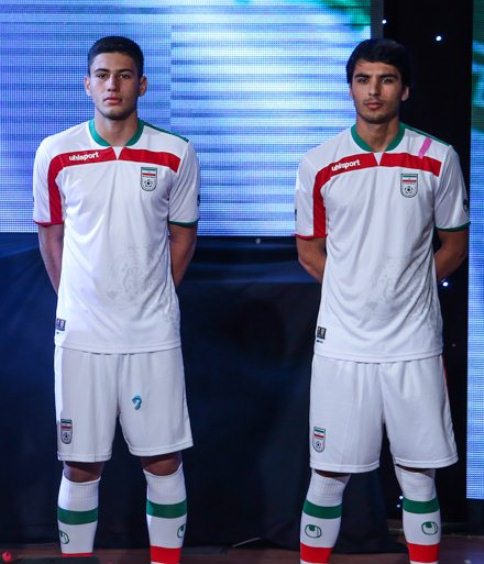 There’s not much information available about Iran’s soccer jerseys, and maybe there’s a reason for that.  They’re incredibly drab.  Given Iran are the longest of longshots at 3,000-1 odds, success may be fleeting on and off the pitch.  If they’re going to lose spectacularly, at least they could have gone with something memorable like Zaire in 1974.  (via FootballKit News) 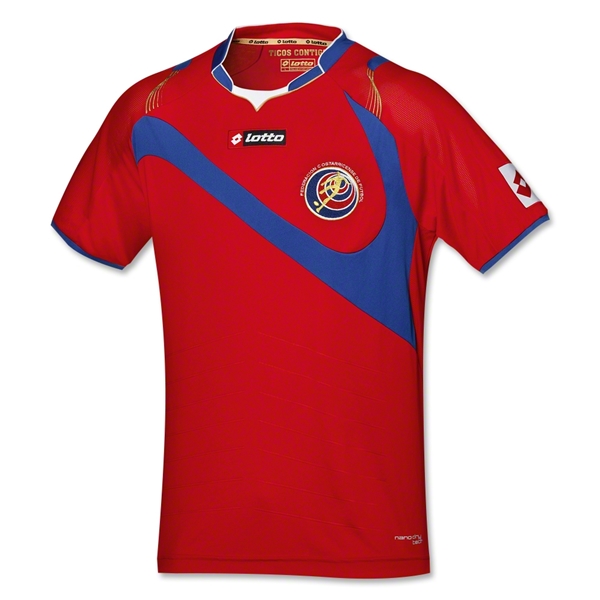 There’s nothing wrong with the shirt of Los Ticos, it’s just that the blue sash/stripe isn’t a bold enough design to make it stand out in any way and is just unusual enough to raise an eyebrow or two. 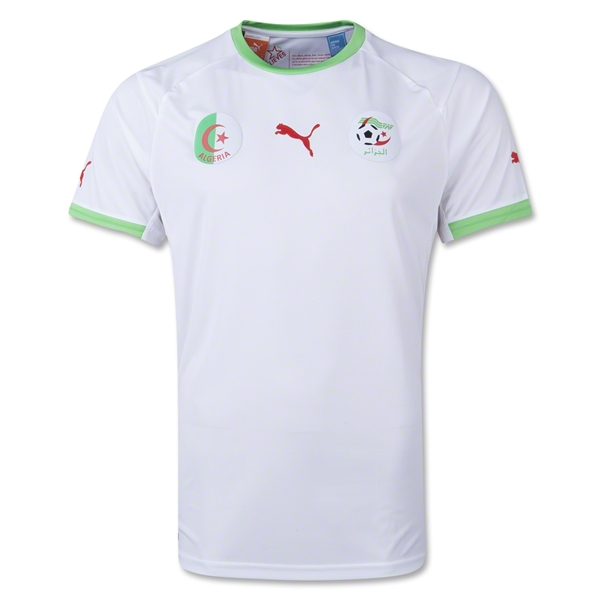 Algeria’s plain white kit with green trim is traditional, if not unremarkable.  If they had the history of England, then it would be a much more iconic look.  They don’t.  Thank goodness for the Algeria badge that at least lets you know who they are. 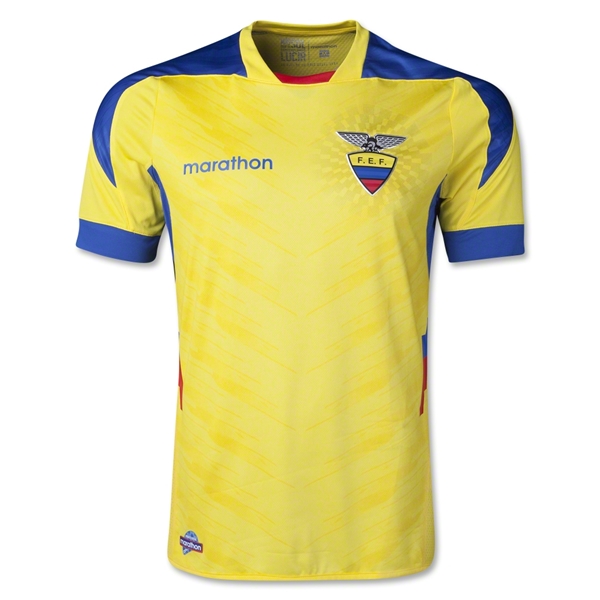 Another shirt, another embossment pattern.  Marathon Sports is based in Ecuador and I kinda wish they thought of a more original design for their logo to showcase alongside the national team’s crest. 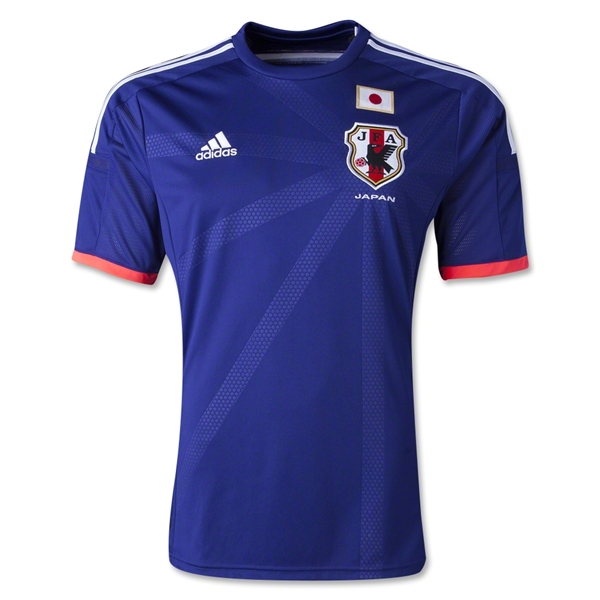 I warned you about how embossing was all the rage for Brazil 2014.  At least Japan does something incredibly unique by having it centered in the crest and then radiating out from there. However, like Belgium there’s just way too much going on here to make it an elite shirt. 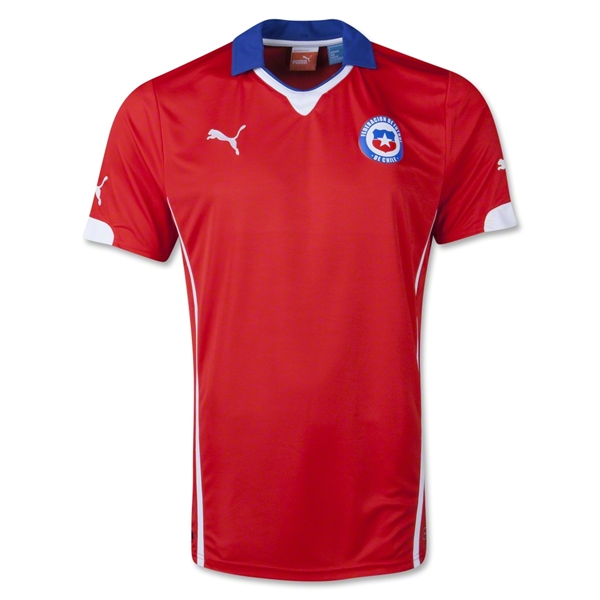 Chile does well to incorporate the country’s colors of red, white, and blue in a look that isn’t quite modern, but isn’t quite classic either thanks to the side piping and half-cuffs.  Thankfully this entrant isn’t as busy as some of the other entries we’ve already discussed. 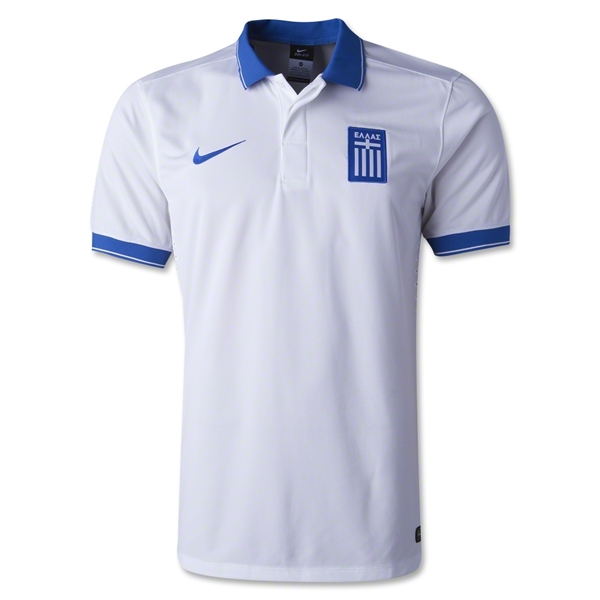 Like a few other teams in this tournament, Greece’s shirt is plain white.  However, Nike gives it a boost with the blue collar and cuffs that give it a simple, but elegant look – one that screams “we’re going to put 11 men behind the ball for 90 minutes and there’s nothing you can do about it.” 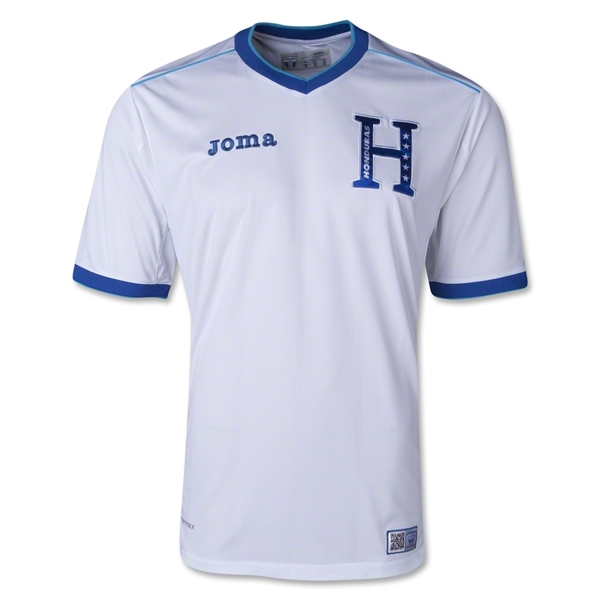 Almost an exact replica of the Greece jersey, but the classic “H” crest with the five stars of the Honduran flag makes all the difference.  Who wouldn’t feel pride playing with a giant letter of the alphabet over their heart?