Group B has the number one ranked team, according to FIFA, and will also feature two huge underdogs that are making their debuts in the Women’s World Cup. It is one of two groups that will have two European teams competing in it and it will feature some great talent that will battle it out to see who will advance to the knockout rounds.

Group B Schedule (All Games on FOX Networks):

Player to Watch in Group B: Célia Šašić, Germany

Célia Šašić is one of Germany’s veteran players, having played in the German Women’s National Team since 2005, with 104 caps and 57 goals. She can be an important piece in Germany’s attack and can be dangerous when she has the ball. Playing for Sc 07 Bad Neuenahr in her native Germany she scored 97 goals in nine years with the club before moving to 1.FFC Frankfurt in 2013, where she has scored 33 goals.

Look for her to help the German attack find it’s way towards goal and you can bet that the dangerous German attack will look for her to finish up top. With the absence of reigning player of the year Nadine Keßler, someone will have to fill the void of providing offense for Germany and Šašić will be the one to give a boost to the Die Nationalelf.

X-Factor in Group B: Overconfidence By Germany and Norway

Playing teams that are 29th and 67th in the FIFA rankings might look like an easy enough challenge for teams that are ranked in the top spot and 11th, but the old saying goes “pride comes before the fall” and that could be the undoing for Norway and Germany. Germany has two key figures out in attacking mid Nadine Keßler (knee surgery) and right back Luisa Wensing (broken leg) so they are weakened a bit on both sides of the ball.

Complacency in facing a minnow is a possibility, but with in the World Cup anything is possible and we have seen many instances where David slays Goliath. Both Thailand and the Ivory Coast are plucky squads that just barely made the World Cup in qualifiers so they are going to come out and have fun with the game. At the same time, they will strive to show that they are forces to be reckoned with on the greatest stage of women’s soccer, as this is both Thailand and Ivory Coast’s first time participating in the Women’s World Cup. 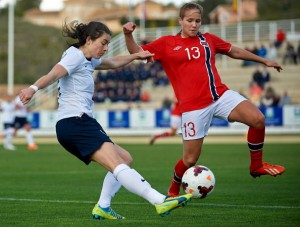 LA MANGA, SPAIN – JANUARY 17: Karen Carney (L) of England competes for the ball with Guro Reiten of Norway during the friendly match between England and Norway at la Manga Club on January 17, 2014 in La Manga, Spain. (Photo by Manuel Queimadelos Alonso/Getty Images)

Most Important Game: Norway vs. Germany

This game will be the decider of who will take first in the group and it will be the game to watch. It’s a battle between the two European powers of the group. Germany will be the heavy favorite going into the match, but a Norway squad will try to recapture the glory of 1995 when they won their first and only Women’s World Cup title.

This game will feature two sides that did exceptionally well in qualifying with Germany scoring 62 goals while only conceding 4 on their way to winning every game in Group 1, meanwhile Norway tallied 41 and conceding only 5 winning all but one of their games in Group 5. In their upcoming game, something has to give and it will be an exciting matchup, and a rematch of the 2013 UEFA Women’s Championship where Germany took the title in an exciting game against Norway 1-0.

Teams To Automatically Move On: Norway and Germany

The UEFA teams look too powerful on paper so I’m predicting that both of them will move on to the knockout stages as the group winner and runner up. Although, the resilience of Thailand and the Ivory Coast will show on the field, Germany looks too powerful on both sides of the ball and Norway has one of the stingier defenses in women’s soccer. The experience that both Germany and Norway have will overpower the newcomers to the World Cup and they will look to dizzy them with clinical passing, tight defense, and powerful attacking.