The Old Firm is back, and for the fans of Celtic and Rangers it’s all they’ve been dreaming about for nearly three years. Such is the nature of the most intense rivalry in sports.

There is truth in all of those theories, but the reality is, unlike most rivalries in sports, Celtic vs. Rangers is a 365, 24/7 personal rivalry. You either bleed the hoops or the union jack, and there’s no stop to the rivalry, even in a nightclub or on travels to support Scotland.

You can bet Celtic and Rangers fans are ready to go anywhere, any time — whether that be with chants, jokes or unfortunately fists and weapons — these two sides of Glasgow and the religious divide simply hate each other in a way that is hard to describe in just words alone.

However, don’t take my word for it. Just ask some of the world’s biggest names who have played in this game about it. Try a name like Ronald de Boer, who has played in El Classico, a World Cup and some other heated rivalries across European soccer.

“But there is no comparison with an Old Firm game,” de Boer told the Daily Mail this week. “The Old Firm has so much emotion in it – and it’s not all about the football. The intensity was so incredible and they were always so special.”

de Boer hits on the key to why this rivalry is unlike any other in sport across the world — most are based on the soccer and the two clubs. This game is about so much more. There is a religious component (although it depends on who you are talking to as to how serious that matters), there is a cultural component and there is definitely a political component to the matter too.

Those are all things that are intensely personal and help to strengthen bonds to a club, bonds that go with fans and some players no matter where they are and what they are doing.

While most rivalries are brutal for the week of the derby and the 90 minutes of the match, few are taken to that level every single day. Few have consequences on a regular night out, few have national and international politics on the line and few divide a city’s population along cultural and spiritual lines.

That’s exactly the case with the Old Firm.

Some rivals revel in each other’s miseries, but when Rangers went through liquidation at the end of the 2011-12 season it was an all out party for Celtic fans. They raised banners touting the death of the “Huns” (a deragitory nickname for Rangers), they passed a coffin in the final match and have even sung to the death of their rivals.

However, on the field it’s been very clear that something is simply missing from Scottish football without these two teams in the same division. That’s because along with going through liquidation as a club, Rangers were thrown out of the Premiership and put down to the third level of the Scottish pyramid — the second division.

They’ve managed to climb back up to the second level on the pyramid and that means Rangers are one step away from being back on the same footing at Celtic — at least in terms of the same division.

Rangers’ climb up the ladder of Scottish soccer has been fraught with challenges, and the club are still in dire straights when it comes to the finances.

Despite all that, little can cool the feelings on either side ahead of these two clubs finally clashing once again.

It would only be fitting that the first matchup of the clubs as they currently exist comes in a clash that would put the winner in a final for a trophy. Such is the nature of what matters most for these two clubs and their bitterly divided fan bases.

Speaking of that, there is a great documentary on what it really means to be a fan of the two sides that you should check out if you’re unfamiliar with the Old Firm.

So, it wouldn’t be surprising to see Celtic, the team still in the top division to wind-up the lower division Rangers ahead of their first clash in three years…or as this advertisement put it — the first time the two clubs have met. 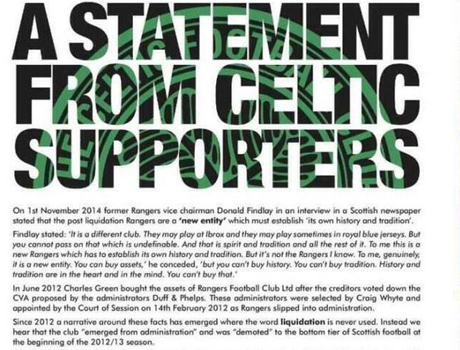 It’s a feeling and a hatred that runs deep for most on many levels. Rangers see Celtic as an invaders club, tied with Irish history and Catholic bigotry brought in with a wave of poor Irish immigrants to Glasgow in the early 20th century.

They aren’t 100 percent wrong, because the history of the Celtic club is very much Irish in nature. Celtic were formed to earn money as a charity for the Irish population of Glasgow, but were much more inclusive in terms of who was allowed to be part of the club and play for the side.

Rangers were famously a protestant club, a club who didn’t have a single catholic player on its rolls until 1989. That’s exactly how bitter and nasty this rivalry is in the boardroom, let alone in the stands and around the town.

Lest you think the poking by fans is a one-sided affair, Rangers fans have goaded new Celtic manager Ronny Deila from the moment the tie was drawn back in November.

Loving the arrogance from Deila here: "Rangers are no problem" Let's ram it right down Delilah's throat #WATP

Words don’t do justice to just what this rivalry means to fans on both sides, so we have a humble suggestion for you:

If you’ve never experienced the Old Firm before, Sunday at 8am ET would be a great time to find a local establishment showing the game and watch it with whatever side you feel most comfortable with. You’ll never be the same — and that’s a mark of a truly great rivalry.