Something happened last Thursday that hasn’t happened in 22 years — an English team won’t be in the quarter-finals of a European competition. Let that fact sink in for a bit.

After Everton were thumped by Dynamo Kiev in its round of 16 tie the last English hope vanished, and it left many wondering what was wrong with the English game.

Should they consider a winter break like a lot of other leagues in Europe? Does the ultra-competitive nature of the English Premier League wear teams down too much? How about the fact that other teams seem to have an advantage in style? Maybe there just isn’t enough revenue to compete with the biggest of clubs anymore?

There were a million-and-one questions being asked as to how such a shocking thing could’ve happened. Lord knows the folks across the pond were wringing their hands and pulling their hair out trying to come up with anything that would stick as an excuse.

One fact remains — without something changing soon, England’s four spots in the Champions League are going to go the way of Sentanta Sports in America (a.k.a it won’t exist anymore).

Perhaps the most talked about reason is the fact that there is no winter break and by the time February and March roll around there isn’t enough left in the tank for teams to compete against the best in the world.

Let’s just knock that little nugget right back to the dinosaur age, because the truth is that England’s Champions League foes weren’t exactly playing fewer games themselves. Hell, the best players on those teams haven’t played demonstrably more minutes either, according to a report by the Daily Mail:

Barcelona have played 44 to City’s 42 this season, Chelsea 44 to Paris Saint-Germain’s 45 and Arsenal played 45 to Monaco’s 44. Lionel Messi has played 3,531 minutes for Barcelona and Cristiano Ronaldo 3,323 for Real Madrid, while Alexis Sanchez has played 3,326 for Arsenal and Eden Hazard 3,539 for Chelsea.

Clearly the age-old excuse used by managers and pundits doesn’t really hold water. The truth is, all teams in major European leagues are likely to play near the same amount of games because they contest the same exact amount of competitions (four) per season. They also are the ones most likely to go on deep runs in those contests as well.

Yet there is one simple reason for it happening that few want to face — England’s dominance has gone from on the pitch to in TV viewership (especially here in the United States).

On the popularity scale there is simply no competition for the EPL. It is top TV dog all around the globe and easily the most watched league in the most lucrative television markets of Asia and the United States too.

It’s led many to believe that the best teams, best players and best competition lies in the EPL. While the best competition argument still holds water, with eight teams often fighting it out for European spots down to the very bitter end, the rest simply aren’t true any more.

Barcelona have three of the biggest superstars in the world in Messi, Neymar and Luis Suarez. The Catalonian club’s biggest rivals, Real Madrid are becoming Los Galácticos once again with the likes of Cristiano Ronaldo, Gareth Bale and about 15 other world-class players on the roster.

Bayern Munich have at least the equal, if not superior, pool of players to draw from and Juventus is the standard barer in Italy too. Then you’ve got a team like PSG who have the billions to match Chelsea and Manchester City’s pocketbooks too.

Suddenly the playing field and player pool isn’t nearly as dominant as it once was.

Take a trip back to 2008 when half of the final eight teams in the Champions League were English and Manchester United took on Chelsea in the final will you. Those teams featured names like Cristiano Ronaldo, Patrice Evra, Wayne Rooney, Carlos Tevez, Frank Lampard, John Terry, Didier Drogba and a host of other world class players.

Now fast forward over half a decade later and Ronaldo is in his prime, but playing in Madrid. Lampard is on Man City’s bench as he waits until the summer to move to MLS side NYCFC, Drogba is a “wunder-sub” bit player for Chelsea and Tevez is resurrecting his career with the Old Lady of Italian soccer.

Rooney is really the only one still starring for either of these teams (and yes I said that about John Terry, who is clearly on the declining side of his career).

Therein lies your problem — no longer does English football hold the monopoly on the best talent the world has to offer.

Ironically, that 2008 season also provides us with a lesson about the “intensity” of the English game. During that deep run by English sides, those in the media and involved in the game pointed to the week-in, week-out intensity of the EPL as to why all four English teams were doing so well in the Champions League.

Now, suddenly that same type of competition and intensity is seen as a weakness and a hinderance to the game?

However, intensity may be the key to why things have gone so pear-shaped for English clubs on the big European stage. It’s just that they seem to lack said word when the sides step on to the pitch for matches in UCL or Europa League action.

”We’re going to have to have a good long look at ourselves,” England assistant coach Gary Neville told Sky Sports (via Yahoo! Sports). ”We’re getting embarrassed year in, year out at the moment.

”It is shocking, really shocking, and until we get an intensity in our game that befits top-level football, it is not going to happen. We are way off, absolutely way off.”

Some hope lies in the massive infusion of cash that is about to come thanks to the record-breaking $8 billion deal struck for domestic TV rights to the EPL.

Another of the excuses seems to be that English teams are great passing sides with nothing to show for all the possession they create. That’s very much a myth given the stats put out by the Daily Mail: 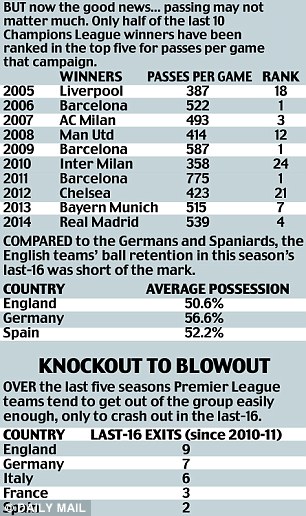 It sure seems as though the issues lie in finding an identity and keeping the best players in the world in the English game.

Arguably, English clubs have become the sellers where they were once the buyers of any and all great international talent. Instead, English clubs today are often left to pick up secondary pieces or sell off their best players to the likes of Madrid, Barcelona and even Bayern Munich too.

Until the league stabilizes and the biggest names finish off rebuilding exercises European glory may be fleeting at best.