Coming in to the World Cup via the intercontinental playoff was not what El tri fans and the team had in mind. Requiring the United States’ help in just getting to that point made many question the Mexican’s chances at the World Cup. However, they have looked like the best side coming out of Group A and were often the better group on the field against Brazil in a 0-0 draw today. Four points out of six was about what Mexican fans were dreaming for and with an upcoming match against Croatia El tri controls its own destiny against Croatia in the final group stage game.

To the casual sports fan that tunes in every four years, a 0-0 draw probably won’t move the needle. However, just show them the Mexico vs. Brazil match from Tuesday and it will shut them up. In fact, just show them the highlight reel for Mexican goalkeeper Guillermo Ochoa. He was simply fantastic between the pipes and it could’ve easily been 3-0 or 4-0 for Brazil without him. Ochoa made six saves on eight shots on target, while his team put just three on frame. That performance made Ochoa a favorite meme of the day too: 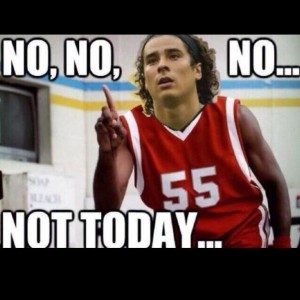 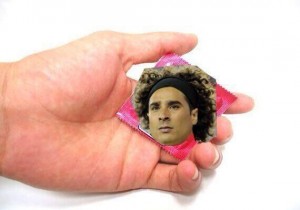 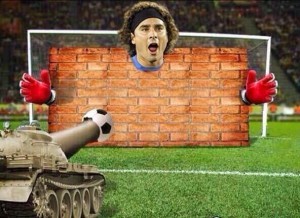 Just….just…how do you do that? At least Russian goalkeeper Igor Akinfeev has some dubious company (cough, Robert Green)

Tactical suicide taking Fred out. Who is going to fall over without being touched in the box for a late winning controversial penalty?

The beautiful game is expected to be played with flair in Brazil, but that’s not what the Brazilian national team of 2014 is all about. It’s strange to see this side becoming one that does well on the counter and is perfectly fine playing possession soccer. Sure, Neymar is an amazing talent and one of the best young players in the world, but through two games Brazil has been anything but exciting to watch. That just seems downright strange to write, too.

Belgium gave up a dumb penalty in the box, allowed the penalty kick to go in to the net and then looked dreadfully boring the rest of the first half against Algeria. However, Belgian manager Marc Wilmots made three very impactful subs in the second half and Belgium showed its power thanks to his moves. Wilmots first brought on midfielder Dries Mertens at the half, followed by forwards Divock Origi and Marouane Fellaini. All three had a huge role in the Belgian comeback, but it was Fellaini who leveled things in the 70th minute, only to be topped by a laser from Mertens in the 80th to seal the deal for the Red Devils. For a second day we say managers make brilliant substitution moves and that deserves some applause.

beats by Dre had one of the better commercials leading up to the World Cup, but according to a report from Reuters they aren’t having any affect at the actual event. In fact, they are banned from use at official World Cup venues. Yep, players are not allowed to wear the devices around their necks, display them or even have them out of a bag on the premises of World Cup venues thanks to a deal FIFA has in place with Sony as an exclusive sponsor. At least the Japanese electronics giant were nice enough to give every player a free pair of headphones. Still, it’s crazy to not see the obligatory shot of Neymar or Altidore or any number of endorsed athletes sporting the headphones around their necks during interviews.

Poor Tim Cahill, he has no help around him on the Socceroos. After seeing the Dutch demolish reigning World Cup and European champions Spain 5-1 on day two of the tournament, Cahill and the Socceroos have to be quaking in their boots (I would be too). This game could be really ugly really fast, especially if the Dutch can get out to a two or three goal lead early on. Look for them to attempt just that against a bad Australian defense and then sit back and enjoy qualification for the next round. No one is going to catch the Dutch in Group B, that’s for sure.

Chile let off the gas against the Australians and it nearly cost them full points. However, they come in to this one second in Group B (behind Netherlands on goal differential) and looking to keep themselves in the mix for qualification to the round of 16. Winning would guarantee that based on an insane +6 goal differential over the Spaniards. However, a draw or a loss and simply not getting blown out will also work in the Chileans favor. Expect the embarrassed Spaniards to come back with a vengeance and clearly they can’t take Chile lightly or they’ll be run out of this cup with a game to go.

Croatia hasn’t exactly had a stellar start to its World Cup campaign. First it was the insult of Fred diving and ruining all hope of a tie, but then the Croatian media decided to go all stalker and hide in the bushes to take nude photos of the team at its hotel. Needless to say, they’ve got some anger to take out on the field and Cameroon is the unlucky opponent standing in front of them. However, the African side showed well in a close loss to Mexico in the first game and won’t be an easy out here. In fact, I expect this to be the most competitive game of the tournament.