Following up on Phillip Bupp’s article from earlier about MLS Player Salaries, we here at 32 Flags went through every team’s and every player’s salary looking for anomalies, bargains, and overpriced MLS players. What we found is there are a lot of MLS stars getting paid the league minimum to carry significant loads on their teams… especially on the defensive line. MLS teams pay premiums for goal scoring and creating; they still rely on young, mostly American talent to anchor back lines.

That said, let’s go ahead and look at each team. All dollar amounts are the player’s annual salary.

Chicago Fire – Lots of bad contracts on the Fire, especially with their forwards. With Mike Magee out (who makes about $400k), Chicago is clearly searching for a striker by opening the checkbook, but none have hit so far. 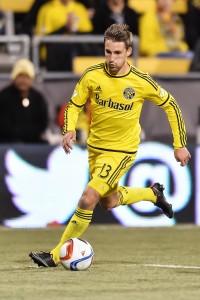 Columbus Crew – Finlay is quietly having one of the best seasons in the MLS distributing the ball to lead-leading goalscorer Kei Kamara. On the other side, Pogatetz has gotten much better since his initial disastrous start with Columbus, but he’s still not good enough to justify that lofty salary, especially when players like Tyson Wahl and Tony Tchani run midfield circles around him.

Colorado Rapids – Like the Fire, a lot of overpriced players on a bad team, and like the Fire, the Rapids have a budding young midfielder making next-to-nothing while playing the best soccer on the team. It’s tough to pick the worst contract on the Rapids, but Moor’s contract is probably the biggest albatross. The only way to justify such a lofty salary is that Moor has been in the league for a long time and the Rapids are paying for experience out of loyalty.

FC Dallas – Hedges and Castillo are All-Star caliber players and should be making well over $200,000. Dallas is getting an absolute steal with these two deals. Dallas doesn’t have any terrible contracts on the books. They pay David Texeria a lot, but they’re paying for potential there, and I may look like an idiot for calling him overpriced now when he leads the league in scoring next year. 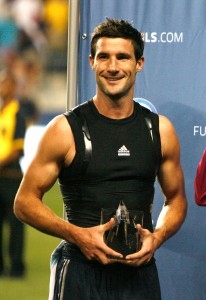 DC United – How would like a back-line good enough for top of the league for less than $160,000? Coach Ben Olsen struck gold with former #2 overall pick Birnbaum and LA Galaxy castoff Opare.

However, they have gotten unlucky with former All-Star Chris Pontius, who just doesn’t look the same after a series of leg injuries. Don’t get me wrong–Pontius is one of my all-time favorites, but his post-injury form just isn’t the same (and it pains me to say that). And finally, Michael Farfan can barely get on the pitch, and has no impressed at all in limited appearances.

Houston Dynamo – Sarkodie makes a lot to be so inconsistent, but at least Houston makes up for it with a steal in Horst. 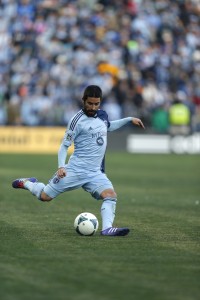 Sporting Kansas City – Like many on this list, Ellis is a rookie defender getting a lot of playing time and making the best of it. Not only does Nagamura not have a role at SKC anymore (with Benny Feilhaber and Roger Espinoza owning the midfield), he just looks completely done. Nagamura needs a change of scenery sooner than later, but doubtful that many teams would be willing to take on that contract.

Los Angeles Galaxy – Villarreal is probably the best contract in the entire league as he rapidly develops into a very strong midfielder. Vayrynen is very solid Finnish international who should be playing well, but he just hasn’t yet found his footing in MLS, often being far outplayed by players like Baggio Husidic.

Montreal Impact – Jack Mac had one amazing ten or twenty game run for Philadelphia. Since then, he’s been an average (or maybe below-average) MLS striker. There’s no way he’s worth that salary but, at only 22 years of age, he has time to make me look like an idiot rather than himself like a flash in the pan. On the other hand, Toia has fought his way into the first team and looks to be a very solid, young MLS-caliber defender. 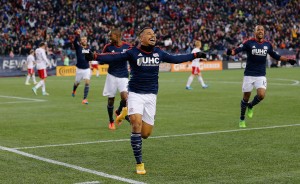 FOXBORO, MA – NOVEMBER 29: Charlie Davies #9 of the New England Revolution celebrates his goal in the first half against New York Red Bulls during Leg 2 of the MLS Eastern Conference Final at Gillette Stadium on November 29, 2014 in Foxboro, Massachusetts. (Photo by Jim Rogash/Getty Images)

New England Revolution – Caldwell has been a midfield sensation for New England, especially with Jermaine Jones missing significant time due to injury. And who expected this career renaissance out of Charlie Davies? MLS teams avoided Davies years ago due to character concerns and a failed stint at DC United, guessing that most regret that decision now.

On the bad side Two years ago, Fagundez looked like the next young MLS attacking star. Now, he’s hit a bit of a slump and just doesn’t look right.

New York Red Bulls – Like DC United, the Red Bulls enjoy a backline with two very young, very cheap, and very good defenders. On the left side of that line though is every Red Bull and Costa Rica fan’s nightmare: Roy Miller, who nobody will ever forget for not knowing how penalties worked. 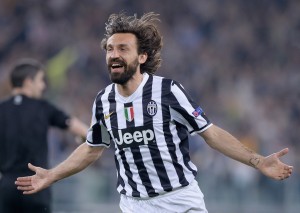 New York City FC – While David Villa carries the team, his fellow countryman Iraola carries the bench. Iraola has only played ninety minutes this season, which obviously will need to improve to justify a lofty salary. Ballouchy never impressed for NYCFC’s cross-town rivals, but he seems to have found a role and plays solid minutes for a meager wage. But really, if Ballouchy is your best contract, then you don’t have any reasonable contracts on the club.

Orlando City – Okugo looks lost in purple after dominating in whatever-that-color-is-that-Philly-wears. Thankfully Ceren has picked up the slack and looks like the real deal. 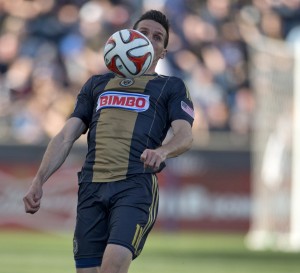 Philadelphia Union – I love Sebastien Le Toux, really, but he is not worth that salary any longer. If the Union want to keep him, then he needs to take a Charlie Davies-sized pay cut. Philly might be the only club without any obvious best contracts, so we’ll give that honor to Fabinho, who is one of Philly’s best players at a relatively low price tag.

Portland Timbers – Powell is a defensive sensation, as he’s been showing in brief appearances with an explosive Jamaica side. But, as of yesterday, Powell seems to have abandoned Jamaica to return to Portland a bit early. Doesn’t look good for his international future. On the other side of the pay spectrum, Ridgewell is a very competent defender, probably one of the best in the league, but that price tag is ridiculous. Knock that in half and maybe he’d be worth it. 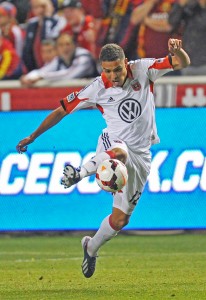 Real Salt Lake – The upcoming battle between the Luises. This doesn’t seem fair to attack Luis Gil, who’s still very young and very talented, but he’s making the big bucks now. No longer can RSL wait for potential; they need him to perform at a high level right now. Luis Silva has just freshly arrived via trade with DC United, where he has had an off-season thus far. But if he can regain his 2014 form, then RSL have a real attacking midfielder and won’t even need Luis Gil.

Seattle Sounders – Not even sure why or how Chad Barrett is in the league anymore, much less making six figures. The Sounders don’t have a lot of great bargains or bad contracts—they just sign good players at reasonable price. Marco Pappa is the exception who probably should be making more in this league. 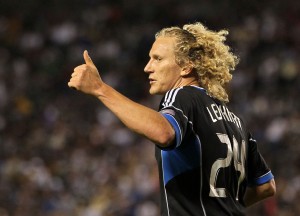 CARSON, CA – NOVEMBER 04: Steven Lenhart #24 of the San Jose Earthquakes gestures to the referee’s assistant during the first leg of the MLS Western Conference Semifinal match at The Home Depot Center on November 4, 2012 in Carson, California. The Earthquakes defeated the Galaxy 1-0. (Photo by Victor Decolongon/Getty Images)

San Jose Earthquakes – JJ Koval is a solid young midfielder still making the league minimum. Can’t beat that. Another good contract is Tommy Thompsons ($145,000), but in reality no team should be paying Thompson more than that yet. Don’t want to wind up with a McInerny situation. With Lenhart, San Jose must be paying for Bad Boy reputation. Lenhart is just not a productive striker in this league anymore. Sign him if you want to hurt someone else, not score goals.

Toronto FC – Findley is absolutely done as a high-level striker. His salary doesn’t make any sense, and was probably informed more by his Nottingham Forest and USMNT experience than any on-field play. On the other hand, Hagglung is a solid, young defender at league minimum (like most other good contracts on this list).

Vancouver Whitecaps – With Rosales, the Whitecaps are paying for reputation earned by Rosales several years ago with Seattle. He’s not the same player and this contract will likely be dead weight until they can offload it. At least when Rosales’ contract is up, the Whitecaps should be able to re-allocate that money to raise Manneh’s salary and ensure he doesn’t leave. 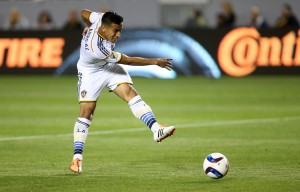 LOS ANGELES, CA – MARCH 06: Jose Villarreal #5 of the Los Angeles Galaxy shoots to score the Galaxy’s first goal, in the second half against the Chicago Fire at StubHub Center on March 6, 2015 in Los Angeles, California. The Galaxy won 2-0. (Photo by Stephen Dunn/Getty Images)

Villarreal is turning into yet another LA Galaxy-developed star. Bruce Arena knows how to spot and develop talent for sure.

Roy Miller. What can be said about the guy? For his salary, you could sign three players. Just a terrible contract that surely will not be renewed.