The Capital One Cup final was a taxing match for both sets of fans. It was an exciting, nervy match that needed to be decided by penalty kicks. Now that the dust has cleared a bit, the rest of the season can continue. There are a lot of lessons that both sets of players can learn from this game. They will need to learn quick, because the Premier League matches are set to start back up early in the week, and the Premier League waits for no team. So, what can be taken from the Capital One Cup final? 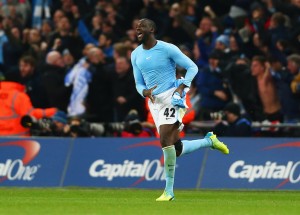 LONDON, ENGLAND – FEBRUARY 28: Yaya Toure of Manchester City celebrates as he scores the winning penalty to win the shoot out during the Capital One Cup Final match between Liverpool and Manchester City at Wembley Stadium on February 28, 2016 in London, England. (Photo by Clive Brunskill/Getty Images)

The biggest thing that both teams will take from this match is that they all need to be more clinical with their finishing. This isn’t a new lesson, especially for Liverpool, but both teams had the opportunity to end the game multiple times. They just couldn’t do it. Manchester City ended up relying on a howler from Mignolet and Liverpool waited until the 82 minute to equalize. It just wasn’t good enough from both attacks, and both managers will be looking to rectify that before the end of the season.

Manchester City need to look at how solid their defense was during the Capital One Cup Final and build from that. Through the leadership of Kompany and some great defensive work, Manchester City managed to keep Liverpool’s attack quiet, save for a few moments. At the beginning of the season, Manchester City was a powerhouse defensively, and this calmness allowed them to become early favorites for the title. Now, they are sitting in 4th and have been incredibly inconsistent over the last few weeks. If they want to claim the title, which I maintain is still very possible for them, they need to look back before going forward.

Having Vincent Kompany back in the lineup will help this without a doubt. But even with him back, the last few weeks has shown that he can’t change City’s fortunes on his own. A big change that was made for the Capital One Cup final was that the defense sat deeper as a unit. Generally, Manchester City has always tried to play a more progressive, high lined defense. They sat much deeper for this game, most likely in an attempt to prevent a similar result to the mauling they received from Liverpool a few months ago. Whatever the reason, it worked really well, where they almost entirely nullified the Liverpool attack. The defensive shape for the final also differed as they utilized Sagna and Clichy as classic fullbacks instead of as wingbacks. This gave City a sturdier defensive shape. Moving forward, this will require a great deal of faith in the attacking unit to get the job done, but let’s be serious for a second. Their front line is made up of Sergio Aguero and David Silva. The rest should be overkill. 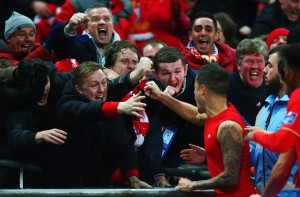 LONDON, ENGLAND – FEBRUARY 28: Philippe Coutinho of Liverpool celebrates during the Capital One Cup Final match between Liverpool and Manchester City at Wembley Stadium on February 28, 2016 in London, England.

Aside for getting back to scoring goals and being wasteful (Liverpool need to look at that more than City), Liverpool can see where they need to improve this summer. This season was always going to be about change and growth under Klopp and winning the Capital One Cup would have been great for them, but the important thing is diagnosing the issues inherent within the squad. This game showed a lot of the problems. Klopp has already helped a lot with one position by bringing in Joel Matip on a free, but something needs to be done about the left back spot, the goalkeeper position, and the right wing.

Moreno is a good young player who has a lot of potential but he was constantly caught out of position in the final. A more established, physically imposing left back who can deputize the position, either while Moreno learns to defend better or is shipped out, would help solidify that defense. While Mignolet had some incredible saves during the game, he also was incredibly at fault for the goal Manchester City scored. The Capital One Cup final showed the best and the worst of Simon Mignolet, and it’s a position that Liverpool desperately need to improve in the summer. Finally, right wing. James Milner did a good job in the position overall. The problem is that he has been struggling to score goals, and with the setup Liverpool currently have, that position needs to score goals. I would expect these three positions to be focused on a great deal in the summer to come, regardless of Mignolet’s new five-year contract.

As I said above, the Premier League waits for no team. Manchester City will have no time to savor their victory, nor will Liverpool have time to lick their wounds. The rematch at Anfield is on Wednesday, and whoever learns from the Capital One Cup final the quickest will be eager to use those lessons for a valuable three points.