What’s At Stake in the Capital One Cup Final

The Capital One Cup final is this Sunday. Call it a Mickey Mouse Cup, call it a waste of time, but I’m willing to bet if you’re saying that, it’s because you don’t root for Manchester City or Liverpool. At the end of the day, the Capital One Cup is a cup worth winning, and you can bet the players will be up for this game. But this is soccer. Games, and the significance behind them, are rarely as simply winning for the sake of winning. There is always a subtler undertone that influences the story that plays out on the pitch. What are these factors that are at play for the Capital One Cup this season? Outside of the fact that these are two of the largest clubs in England, there are some interesting details that will come into play this Sunday. 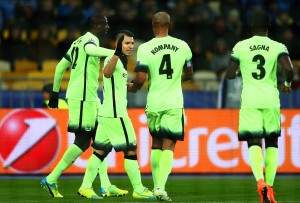 KIEV, UKRAINE – FEBRUARY 24: Sergio Aguero of Manchester City is congratulated by teammates Yaya Toure and Vincent Kompany after scoring the opening goal during the UEFA Champions League round of 16, first leg match between FC Dynamo Kyiv and Manchester City FC at the Olympic Stadium on February 24, 2016 in Kiev, Ukraine. (Photo by Michael Steele/Getty Images)

This season, the Capital One Cup represents the chance for the players to give a going away present to Pellegrini. He has been a great manager for them, winning the Premier League and continuing their progress as one of the best teams in England.

It also is a great chance for the players to prove themselves to Pep Guardiola for when he takes over next season. There is a great chance that several of the most important players in Manchester City’s squad could be not favored by the new manager. Chief among these players is Yaya Toure and David Silva, who both are not the type of player that Guardiola tends to favor. If they want to stay at Manchester City next season, they will need to take every chance they can get to ensure they won’t be on their way out of Manchester next season.

The final factor is that they will want to avenge the 4-1 defeat they suffered to Liverpool back in November.

All that being said, however, there is a concern that they may not be taking this competition as seriously as the league and Champions League. While I can’t necessarily blame them, sometimes it pays to pick and choose your competitions over others, it will certainly come into play against Liverpool.

For Liverpool, winning the Capital One Cup would be the perfect start to a new era, starting Klopp’s time at Liverpool off with a bang. During Brendan Rodgers’ time at Liverpool, the fact that he had yet to win a trophy was constantly brought up. If Klopp can get that monkey off his back early, all the better. 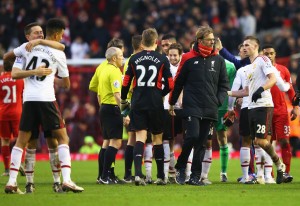 Winning a cup only a few months after getting the job, after the previous manager had struggled so much, would give Klopp almost unprecedented freedom at Liverpool. He will be able to set up the team as he sees fit, and people won’t question him because he’s already had success.

It will also put a nice positive bow on a period of time that can only be described as a time of struggle. It will show that they are improving and help the team look toward the future. With Top 4 almost certainly out of the picture, a cup win will appease the fans and act as a great selling point to transfer targets in the summer.

Another reason, outside of the winning the cup, is to prove Raheem Sterling wrong for leaving Liverpool. On his way out the door, Sterling made a parting shot, saying he had “joined a club who can win trophies“, with the implication that Liverpool could not. Now, the teams face each other in the first possible final they could. His former fans and teammates will be absolutely chomping at the bit to prove him wrong.

At the end of the day, these are just backdrops to the game unfolding on the pitch. As the players walk out into Wembley, everything else falls away. Nothing else matters, friends, family, money. Only winning that cup. But once the dust settles, who the victor is and what that victory means will become essential in analyzing the game and where the team goes from here.