When England crashed out of the Euros to Iceland, it was a disaster for one of the more storied soccer playing countries in the world. Gary Lineker summed it up best:

The worst defeat in our history. England beaten by a country with more volcanoes than professional footballers. Well played Iceland. 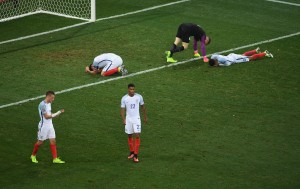 What summed up everything, the style of play, the attitude and lack of heart, was the manner in which Roy Hodgson announced that he was resigning after the match. The former Liverpool and Fulham manager read a prewritten statement. The fact that it was a prewritten statement, after one of the worst losses in recent memory for the English national team, says more about the manager than anything he could have said during the short press conference. It says that not only did he think that England were in for a tough match, Hodgson believed that the odds were so poor for his team that it was a good idea to draft a statement so that at the very least he would look good as he was booted out of coaching England. It shows a lack of conviction and belief that bled into the team against Iceland. This lack of conviction has been a massive problem for England for sometime. While Roy Hodgson certainly should have never been near the England job, the issue lies deeper than him.

Quickly, tell me how an England team plays? Describe their style in three words. At one point you can have described them as hard working, hoof it up the wing, cross it to the big #9. That really doesn’t fit them anymore. The game itself has evolved past such simplistic tactics and England’s players don’t really fit that style either. None of England’s strikers are aerially dominating and wing-play isn’t as big a focus as it once was. But they don’t play the high pressing, industrious style of the Germans, nor do they have the players for the silky tiki taka of the Spanish. They certainly don’t have the tactical nous of the defensive Italians. So how do England play? 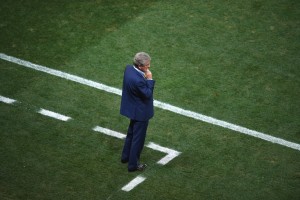 NICE, FRANCE – JUNE 27: Roy Hodgson of England looks on during the UEFA Euro 2016 Round of 16 match between England and Iceland at Allianz Riviera Stadium on June 27, 2016 in Nice, France. (Photo by Laurence Griffiths/Getty Images)

This all flows back to the lack of conviction and belief. The way Hodgson ran the team would be to fall into a style based on what was working at the time. Look at how England started the Euros. They played a 4-3-3 with Harry Kane up front with Adam Lallana and Raheem Sterling on the wings. Wayne Rooney dropped into the midfield with Eric Dier and Dele Alli. They played the same lineup until they fell behind Wales, when Hodgson threw caution to the wind and put on three strikers. No tactics, just a panic move. A classic FIFA move of “I need goals, I’ll put on more strikers.” It worked, and England won that match. The third game saw Hodgson cave a bit and play Daniel Sturridge and Jamie Vardy from the start, with support from Lallana. I am uncertain if it was exactly a 4-3-3 or a 4-4-2 in a diamond or a 4-5-1. It was almost as if Hodgson just said, “Okay, boys, it worked last time. Just go out there and do something.” Against a defensively sturdy Slovakian side, something didn’t happen. In England’s final match of the Euros, against Iceland, Hodgson went back to starting Kane, who had a poor tournament, and Rooney in the midfield. Sturridge was shifted out to the wing, with Sterling, who also had a poor tournament, on the other flank. It was here that the lack of a cohesive plan was evident and England fell apart. Players ran listlessly around the field and there was a distinct lack of ideas. Hodgson would try his Welsh tactic, through on more strikers, but even this brilliant strategem was not enough to save the Three Lions. 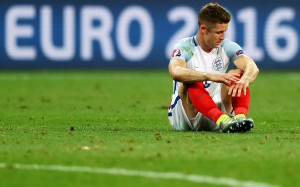 NICE, FRANCE – JUNE 27: Gary Cahill of England shows his dejection after his team’s 1-2 defeat in the UEFA EURO 2016 round of 16 match between England and Iceland at Allianz Riviera Stadium on June 27, 2016 in Nice, France. (Photo by Lars Baron/Getty Images)

The problem here is that England seem constantly stuck between the past and future. They have the players to play a really modern, sleek style, but were hamstrung with managers and an FA that are stuck in the past. Hodgson is a good enough manager to identify that he couldn’t play the style he is most adapted to, the classic English style, with the players on hand so he changed it a bit. Any good manager will do this, and, to be fair, any manager coaching in the Championship or higher is undeniably a ‘good manager,’ comparably. Having a manager that was constantly fighting his nature and players not fit for that manager’s nature led to a lack of identity that have led England to the current precipice over which they now stand. Rumors abound about Harry Redknapp or Jurgen Klinsmann taking over the job, but neither of these men will be able to solve the problem that England have.

First and foremost, the English FA needs to decide on what they want to be going forward. This is something that every successful national team does. If they want to revert back to a tough, hard working, boot ball team, fine. If they want to be a sleek, modern, tactically astute team, fine. But make the decision and have every decision after that follow that decision. After that decision is made, they need to select a manager who will instill this ethos into the national team, and after that manager is gone, select another manager who will follow in the previous manager’s stylistic footsteps. Only then will we begin to see a new English style develop instead of this hodgepodge of a group of very talented players being thrown together and pushed out onto the field. Maybe, after all of that, England can live up to the hype.

*I am aware that a well funded and centralized youth development can also be central to a strong national team, looking at countries like Germany and Spain. I realize this but didn’t want to bore you with a 3,000 word essay on the importance of proper youth training pitches. Maybe another day.