In the very early minutes of the Arsenal-West Ham match (13:25), while the game was still deadlocked, Manuel Lanzini broke onto a mishit Andy Carroll bicycle kick. After a cool finish past Petr Cech, the linesman flagged Lanzini offside. We can see the goal below.

In real time, Lanzini moves so quickly that it does look like he could potentially be offside. He’s able to get to the ball so quickly and is completely unmarked, it only makes sense that he started in an offside position. Let’s look at the angle that the sideline referee had of the play. Looking at the players directly around Lanzini, it looks like he is, in fact, offside. From what the referees could see, both sideline and main, Lanzini was slightly offside. This call wasn’t made any easier by the fact that there is a whole host of bodies in the box surrounding the ball, making it harder to see clearly. So, Lanzini was offside. Good call, right? Maybe not. It’s harder to tell from this angle, but Héctor Bellerín is playing everyone onside. He was defending the initial cross into Andy Carroll and didn’t get back in line with his teammates fast enough. 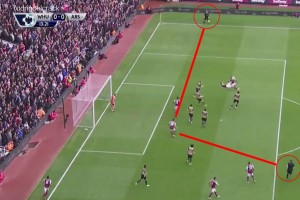 It is much easier to tell from this angle. Here, I’ve noted the views of both referees surrounding the play. Both are looking directly at Lanzini and have relatively clear views as he runs to the mishit shot. From the shot, it’s clear that Bellerín is playing Lanzini onside, but look at the refs’ angles. First, he is very far from the play, so it is easy to miss that he is even involved. Second, both referees are either looking away from Bellerín, or have several players blocking him. On top of that, the sideline ref (who is the one who flagged offside) is at such an angle that Lanzini may appear to be inline with Bellerín.

This is not a defense of the referees, mind you. It was a bad call, and the goal should have stood.