With the exception of Aston Villa, whose own miserable campaign has finally been put to bed with mathematical relegation, the race to survive the relegation is surprisingly open. The three teams vying to escape the remaining two relegation spots are all within three points of each other. The lead held by Norwich is even smaller when you consider that they have played an extra game. Looking at that, with four/five games left, who do we predict will be in the Premier League next season? 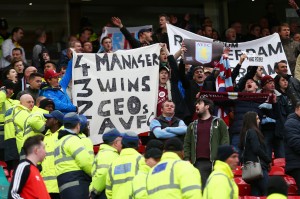 during the Barclays Premier League match between Manchester United and Aston Villa at Old Trafford on April 16, 2016 in Manchester, England.

We can get a sense of the point each team can pick up from these games now. Norwich have a relatively tough run in, but they could get a surprising amount of points out of it. Arsenal have been in tepid form to say the least, and Manchester United are in a similar boat. If Norwich goes to frustrate both teams, coming away with a valuable draw in both matches is very possible. This leaves us with Watford and Everton, two teams with nothing left to play for. They won’t reach Europe, but they won’t face relegation either. Should both sets of players already be mentally on vacation, Norwich stand a good chance of getting a result from the game.

Sunderland have a very similar schedule to Norwich. With Arsenal, Everton and Watford already discussed, we are left with Stoke City and Chelsea. Stoke are currently in poor form. They have let in ten goals in their last three games and only scored three. They have all the hallmarks of a team already on the beach. Chelsea have also been in patchy form, at best. With Sam Allardyce at the helm, this leaves Sunderland with looking upward towards safety.

Newcastle, who sit the farthest in the relegation spots of the three, also have the hardest schedule. Between Manchester City (who is fighting to remain in the Top 4), Liverpool (who is trying to get as high up the table as possible), and Tottenham (who are suddenly five points from the top of the table), Newcastle has three games against opponents with everything to play for. This means that their two other games, against Crystal Palace and Aston Villa, are must wins. 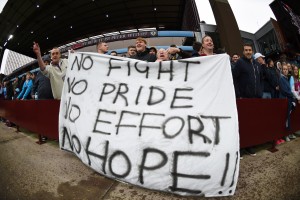 BIRMINGHAM, UNITED KINGDOM – APRIL 09: Aston Villa supporters hold a banner ‘No Fight No Pride No Effort No Hope’ during the Barclays Premier League match between Aston Villa and A.F.C. Bournemouth at Villa Park on April 9, 2016 in Birmingham, England. (Photo by Shaun Botterill/Getty Images)

Okay, so let’s predict how many points each team will get. No way that could go wrong, right? I think Norwich will lose to Arsenal, draw Manchester United, draw Watford, and beat Everton on the last day. That will give them five points and a season total of 36 points. Sunderland will draw Arsenal (Allardyce loves to ruin a party), beat Stoke, lose to Chelsea, draw Everton, and draw Watford. That leaves them with six points and 36 total. Finally, Newcastle will lose to both Manchester City and Liverpool, beat both Crystal Palace and Aston Villa, and draw Tottenham on the last day of the season. This would give them seven points to end the season with 35. Ultimately, it will come down to the final day of the season, all three teams within a point of each other and the prospect of it coming down to goal differential. Not only is it possible, it’s likely. This could be a crazy end to a crazy season.