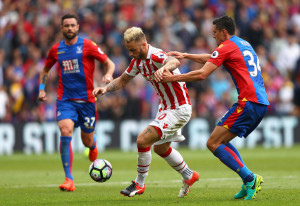 After five games, Stoke sit in last place. They have been unfathomably bad in their matches thus far and have a goal differential of -11. Worst of all, some of the opponents they have gone up against are ones they should have beaten. The points dropped against the likes of Middlesbrough, Crystal Palace, and Hull City could be disastrous come the end of the season. It leaves us thinking, are Stoke suddenly contenders to get relegated this year?

Last season, it seemed unlikely, as they were a solid midtable team, looking to be even better than that. They improved several positions this summer, including striker with Wilfred Bony on loan and Joe Allen in midfield. Clearly, this is a good team. The attack alone should be able to get them midtable. Players like Bojan, Arnautovic, and Shaqiri, to name only a few, have a wonderful mix of attacking verve and goal scoring prowess. The crazy thing is, they added to that and didn’t really lose any players. So what is going on?

The first thing we can look at is that Jack Butland has been injured the entire season thus far. You may question how one player can have that much detrimental effect on a team, but clearly it has. Shay Given, who is a model professional and was one of the best goalkeepers in the league at his best, is the not the keeper he once was. Lacking confidence in your goalkeeper does a lot to destabilize a defense. This could be partially responsible for the 14 goals they have shipped so far this season, almost three per game. 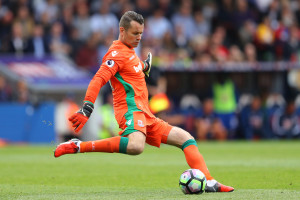 LONDON, ENGLAND – SEPTEMBER 18: Shay Given of Stoke City takes a goal kick during the Premier League match between Crystal Palace and Stoke City at Selhurst Park on September 18, 2016 in London, England. (Photo by Warren Little/Getty Images)

The defensive issues also raise questions about whether the stability that they had maintained under Mark Hughes was from his coaching or left over muscle memory from the Tony Pulis days. Often times, when a defensive manager is replaced by a more attacking one, it takes a few seasons for the defensive stability to wear off. Just look at Everton under Roberto Martinez for a prime example. We could be seeing the same thing occurring with Mark Hughes’ Stoke right now.

That would be nearly as much of an issue, though, if they were at least scoring goals. Instead, that great attacking force that I mentioned earlier has only notched up three goals total. In five games, that stat is just pitiful. Whether it’s a lack of connection at the top or key players not performing, this needs to get fixed immediately before they fall too far behind the pack.

The biggest issue comes down to one thing. Stoke are still largely the same team that finished 9th. The ability is there. The problem is team morale. Just look at their previous games. They would start fine. Maybe not amazingly, but not relegation-battling bad. Once something went against them, a goal or a penalty call or a lack of goals on their end, their heads would go down and they played within themselves. That’s a massive reason why they have shipped so many goals. Once one goes in, they give up and roll over. Then the second goal is scored and then the third and so on.  It’s still a very good team, but they are just as fragile. Questions about whether the team believes in their manager, Mark Hughes, are surfacing, and, looking at them play, you kind of have to agree with them. This isn’t a team fulling buying into what their manager is selling. 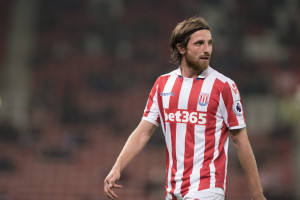 STOKE ON TRENT, ENGLAND – SEPTEMBER 21: Joe Allen of Stoke looks on during the EFL Cup Third Round match between Stoke City and Hull City at the Britannia Stadium on September 21, 2016 in Stoke on Trent, England. (Photo by Nathan Stirk/Getty Images)

So, are they relegation favorites? No, not yet. They are still a very talented team, at their best. That didn’t stop Newcastle from going down last season, though. It’s still early days in this Premier League season and the table doesn’t tell us much quite yet. But the time when things start to click into place is really only a few weeks away, and if Stoke don’t turn this around, they will quickly become relegation favorites.