Life as a soccer player is never tough, especially when you have a bad game. And, boy, did Alberto Moreno have a bad game against Arsenal. At fault for giving away a horribly unnecessary penalty, at fault for the first goal, and lacking his usual attacking outlet, Moreno showed just why many Liverpool want him gone. Sadly, Moreno has almost reached the level of fan-dislike that can only be compared to Simon Mignolet. No matter what good they may do, it is always tempered by the bad.  Moreno is not quite there yet, but if he puts out a few more performances like that, it won’t be long before he is past the point of no return with fans. So, what can Klopp do, and what are his options? 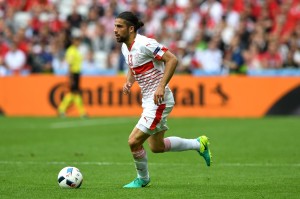 LENS, FRANCE – JUNE 11: Ricardo Rodriguez of Switzerland in action during the UEFA EURO 2016 Group A match between Albania and Switzerland at Stade Bollaert-Delelis on June 11, 2016 in Lens, France. (Photo by Shaun Botterill/Getty Images)

This is perhaps the most obvious. Moreno has been a defensive liability in Liverpool’s backline for two/three seasons now. He hasn’t shown that his defending is getting better. It’s time to sell him for what they can get (he is still highly thought of in Spain) and replace him with someone who can defend. This could be made even easier should Liverpool sell Christian Benteke for anything close to the £32m that they paid for him last year. Two names that spring to mind instantly are Jonas Hector and Ricardo Rodriguez. Expensive options, to be sure, but incredibly talented.

Bring in a Mentor 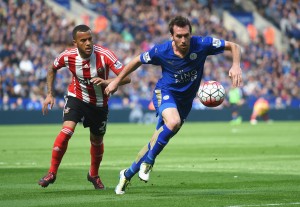 LEICESTER, ENGLAND – APRIL 03: Christian Fuchs of Leicester City is chased by Ryan Bertrand of Southampton during the Barclays Premier League match between Leicester City and Southampton at The King Power Stadium on April 3, 2016 in Leicester, England. (Photo by Michael Regan/Getty Images)

Another option for Klopp would be to bring in an older, more defensive left-back to balance out and mentor Moreno. We have to remember, Moreno is only 24 years old, which is very young for a defender, and still has his best years ahead of him. Bringing in a new defender, one in the 29-32-year-old range, would bring in somebody that Moreno could look to as an example and learn from.

Currently, there are no other senior left-backs at the club, so Moreno has no one else to work with. A player like Christian Fuchs, who is more defensive-minded, is the perfect player for this. He also has the added benefit of being on the wrong side of 30, so would probably be okay with sitting on the bench occasionally. Finally, this option takes Moreno out of the spotlight and lets him develop away from the criticism that can often sink a player’s career. 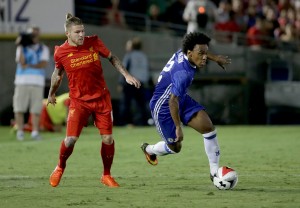 PASADENA, CA – JULY 27: Willian # 22 of Chelsea is pursued by Alberto Moreno #18 of Liverpool in the second half during the 2016 International Champions Cup at Rose Bowl on July 27, 2016 in Pasadena, California. (Photo by Jeff Gross/Getty Images)

The third option is both the least favorite of the fans and most likely for Klopp. That is to stick with Moreno and work with him on the training pitch. This vote of confidence has worked in the past for some players, and there is still a lingering hope that Moreno can learn from his errors. If he is able to overcome his defensive errors and positional mistakes, Liverpool will have one of the best attacking left-backs in the Premier League. No defender created more chances and goal-scoring opportunities than Alberto Moreno last year. His attacking attributes have never been in question. A fullback needs to be able to defend, though, and this is what has been getting him in trouble.

As mentioned above, Klopp looks set to keep the faith, largely because of Moreno’s attitude and enthusiasm to learn. He does look likely to combine options 2 and 3, however. With James Milner coming back to full fitness, don’t be shocked to see him playing at left-back against Burnley. Milner is a player whose game intelligence Klopp trusts beyond a shadow of a doubt. It is this faith in Milner’s ability to read and adapt to a game that will see him on the defensive left flank. Klopp will also be hoping that by watching Milner play, Moreno will learn how to read a game better and utilize his attacking skills in the right way.

Klopp: "If we expect commitment from the players then we have to show commitment too. You can't play without making mistakes."

Milner at left-back isn’t a long term solution, and Moreno will be expected to reclaim his spot after a spell on the sidelines. Klopp clearly both likes and rates the young Spanish left-back, and thinks he will be able to come good in the future. That said, Klopp can be absolutely ruthless when he feels a player doesn’t fit, as evidenced by Christian Benteke’s time at Liverpool, and if Moreno shows he is incapable of improving to Klopp, he will be dropped. Once he is dropped, it will be even more difficult to prove he should stay. Barring an injury crisis (much like the Karius injury that gave Mignolet a lifeline), it would only be a matter of time before he is shown the door.

Without a doubt, Alberto Moreno is a talented attacking fullback that has worked his way to the top level at a very young age. His enthusiasm, speed, and attacking drive make him a valuable outlet, but also a defensive liability. He is now reaching the age that those mistakes will stop being written off to youth and start impacting him permanently. This is a make or break season for Moreno.