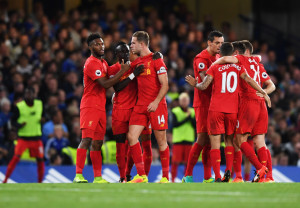 LONDON, ENGLAND – SEPTEMBER 16: Jordan Henderson of Liverpool (14) celebrates with team mates as he scores their second goal during the Premier League match between Chelsea and Liverpool at Stamford Bridge on September 16, 2016 in London, England. (Photo by Shaun Botterill/Getty Images)

This Premier League season has been filled with drama and excitement already. One team that has had the most impressive start of the season is Jurgen Klopp’s Liverpool. Many have said that this year is a bit too soon for them, that they simply don’t have the fire power and defensive steel to compete with the Manchester and London clubs.

Five games in, and we’re already seeing that that assumption may be remarkably incorrect. Liverpool may be currently sitting in 6th, equal on points with Arsenal and Chelsea, but the table is perhaps a bit unflattering when you consider the titanic challenge those 10 points were. Liverpool had the hardest opening schedule of any team in the league, with four of the five opening games arguably title or top four challengers. Compare that to the teams currently above Liverpool and the average table placements of the teams they have played are: Manchester City (16.2), Everton (13), Tottenham (11), Arsenal (10.4), Chelsea (12.8). This pales in comparison to Liverpool’s average placement (7.8). Clearly, Liverpool have been able top pick up some massive points against top four and potential title rivals. Is it time to start taking Liverpool seriously?

It’s certainly a valid question, as many outlets had written them off for a title challenge before the season started. We were even guilty of that. Before we go into the positives, we need to look at why those concerns are valid: the defense and the goalkeeper. If there is one thing that will kill Liverpool’s chances at the title, it will be a combination of their defense and goalkeeping, much like the 2013/14 season. So far, Liverpool have allowed eight goals, or 1.6 goals per game. Over the course of a season, that’ll come out to 61 goals total, rounded up. For a team that wants to challenge for the title, that is abysmal. Luckily, they have scored 11, or 2.2 per game, so far this season. Their excellent attack has been able to offset the defensive woes thus far, but if it wasn’t enough in 13/14, it most likely won’t be enough in 2016/17. 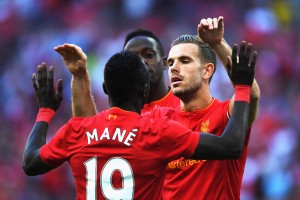 LONDON, ENGLAND – AUGUST 06: Sadio Mane of Liverpool celebrates with Jordan Henderson of Liverpool after the own goal scored by Javier Mascherano of Barcelona during the International Champions Cup match between Liverpool and Barcelona at Wembley Stadium on August 6, 2016 in London, England. (Photo by Mike Hewitt/Getty Images)

That said, Liverpool seem to be working to correct that issue. If we look at the first two matches as outliers, when the back line was a hodgepodge of whoever was fit, we see that number shrink to a goal a game, or 38 per season, which is enough most seasons to win the league (though still a little high). The addition of Joel Matip and James Milner’s growing ability at left back, Liverpool seem to growing more confident in defense. With Loris Karius looking to take the number one goalkeeping from the error-prone Simon Mignolet, things look better than they have been for Liverpool.

The only other concern that remains is can they do it against the teams they should beat? Against Burnley, they showed a shocking lack of ability to penetrate a team that simply sat back. This should not take away from how good Burnley were that day, but the doubts about Liverpool still remain, and will remain until they start beating teams in the lower half of the league.

So with those in mind, why should we take Liverpool seriously as title contenders? Simply put, Liverpool have one of the most vibrant attacks in Europe. Don’t believe me? Liverpool have created 72 chances this season, more than any other team in Europe.

Liverpool have created 72 chances in the league so far this season – more than every other team in Europe. #LFC pic.twitter.com/ExeGd4t1Zz

With the addition of Sadio Mane, they have speed to match the industry and pressing that they had before. This doesn’t even mention the multitude of goal scorers available on the pitch at any one time. If Daniel Sturridge, one of the best goal scorers in the Premier League, is having an off day, Roberto Firmino can step up. Is he hurt or out of form? Luckily, Sadio Mane has shown he can score goals. If that fails, you have Adam Lallana or Phil Coutinho, who have been scoring at a higher rate than previous seasons. Does that fall through? Well, who could forget this?

The point is, if Liverpool are going to challenge for the title, it will be on the back of their incredible attack. They have more goal scorers than ever before, which takes pressure off the rest of the team to perform. To add to the importance of their attack and midfield, that is where their defense starts. By being deadly effective with their high press, Liverpool’s attack and midfield take a lot of pressure off the defense, which has been their Achilles heel in the past. So, with a strengthened defense and a potent attack, it’s finally time for Liverpool to start showing the rest of the league that they mean business.