As the year 2015 comes to a close, we’re taking a look back at a great year of soccer. Today, 32 Flags is focusing on the top ten Premier League games in 2015, from January all the way through December. That time period covers two different seasons. We’re not looking for the best games of the first half of this year, we’re looking at the ten best games for the entire calendar year in no particular order. 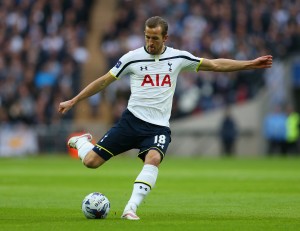 LONDON, ENGLAND – MARCH 01: Harry Kane of Spurs on the ball during the Capital One Cup Final match between Chelsea and Tottenham Hotspur at Wembley Stadium on March 1, 2015 in London, England. (Photo by Clive Mason/Getty Images)

This was one of the big shocks of that season. At the time, Chelsea looked invincible. While Chelsea didn’t seem to dominate in the same way that a Bayern Munich or Barcelona have dominated, they looked unstoppable. They didn’t drop points, and always put out a real professional performance. Then you have Spurs, who always seem to have trouble against larger teams. It was a recipe for a 2-1 Chelsea win. What we got was a goal-fest. A brace from the breakout star of the season, Harry Kane, inspired Tottenham to one of the biggest wins of the season.

Here, we had a game that was as shocking as it was painful. It was the last Premier League game for a legend, Steven Gerrard, for the losing team; a team that underperformed the entire season. Even still, there was still hope that they could turn it around and maybe pull together a great farewell performance for their captain. They did not, and what resulted was one of the most limp displays I have ever seen. It turned out to be the shock result of the season, and ended Gerrard’s illustrious career at Liverpool on a horrible note. Even with the poor form that Liverpool went into the game with, nobody would have predicted Stoke putting six past them. 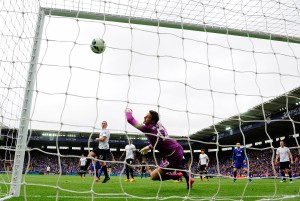 during the Premier League match between Leicester City and Queens Park Rangers at The King Power Stadium on May 24, 2015 in Leicester, England.

Leicester’s last game of the 2014/15 season, after a miraculous escape from relegation and an incredible turn of form that now sees them leading the Premier League. While this game was not a shock, when you look at just the result, the overall gulf in class, and the difference between where Leicester were only a few months before, is staggering.

This was the game that Jurgen Klopp announced his arrival to the Premier League in style. While another entry on this list had happened only a few weeks prior to this, it was this game that really showed what the big German’s new team was capable of. They were utterly dominant. Liverpool truly outclassed Manchester City, the team who should be walking to the Premier League trophy this season. Truth be told, the score could have, and should have, been higher. 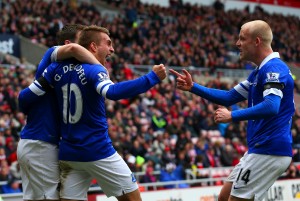 SUNDERLAND, ENGLAND – APRIL 12: Seamus Coleman, Gerard Deulofeu and Steven Naismith of Everton celebrate after Wes Brown of Sunderland scores an own goal during the Barclays Premier League match between Sunderland and Everton at Stadium of Light on April 12, 2014 in Sunderland, England. (Photo by Alex Livesey/Getty Images)

A crazy game all around. It’s not very often that you get to talk about an Arouna Kone hat-trick, or an Everton team scoring six. Almost as rare is seeing Sunderland score two goals. It looked like there was a real game on at the end of the first half, with the score sitting at 2-1 in Everton’s favor. It wasn’t until the second half that Everton turned on a sort of ruthless finishing that saw them score four goals in 21 minutes. The craziest thing about this game, though, is that Sunderland were actually more productive this match, notching up more shots and more shots on target. Everton may have had 67% of the possession, another mad stat, but had Sunderland been a little more clinical, it could have been a 6-6 game. Insanity.

At this point in the season, Leicester were on a 12 game undefeated streak. The rest of the league was still awestruck by what the Foxes were accomplishing. Jamie Vardy was the first to grab a goal, which was quickly cancelled out by Theo Walcott. It was Alexis Sanchez who took the plaudits this game, however, with a masterful hattrick from Alexis Sanchez to take down the high-flying Leicester. While Leicester would recover in startling form, solidifying their place at the top of the Premier League heap, it gives a bit of belief to the other teams chasing the league trophy this year. 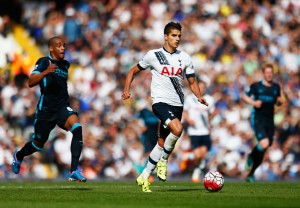 during the Barclays Premier League match between Tottenham Hotspur and Manchester City at White Hart Lane on September 26, 2015 in London, United Kingdom.

With the downfall of Chelsea early in the season, it seemed inevitable that Manchester City would be crowned Premier League champions. Even with City losing the week before, they were expected to bounce back. A 25th minute goal from De Bruyne seemed to promise that, but Dier equalized for Spurs right before the half. Three more Spurs goals would follow, with last season’s hotshot Harry Kane getting his first of the season. This game was an utterly shocking rout from Tottenham against the champions elect.

How can you correctly sum up this game? The Sergio Aguero Show. That’s the only way possible. Kun Aguero showed why he is the best striker in the Premier League by scoring five goals in 20 minutes. That feat is staggering. When a team accomplishes three goals in 20 minutes it’s considered an amazing accomplishment. For one player to beat that on his own is amazing. Newcastle took the lead from a Mitrovic goal early on, but in the 42nd minute, Aguero equalized. He followed that up with four more goals before Newcastle could catch their breaths. A 53rd minute strike from De Bruyne rounded out a six-one win for City. Utter demolition of a team from a world class striker. 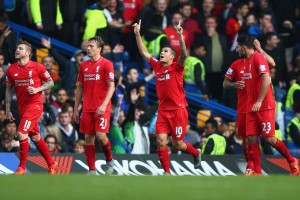 Generally speaking, form doesn’t matter when these two teams play. The supporters hate each other, and if the stare down between Henderson and Costa is anything to go off of, the players do too. Chelsea went up very early with a strike from Ramires, but Liverpool showed a new-found resilient under Jurgen Klopp. Instead of collapsing, as was their tendency too often under Rodgers, Klopp’s men kept pushing under they found an equalizer courtesy of a Coutinho beauty. A second from Coutinho and a cool finish from Christian Benteke would finish off a Chelsea squad that had been run ragged. A classy victory from the men in red that left many Chelsea fans wondering if the time was up for Mourinho.

This was the game that ensured relegation for QPR in a display that could only be described as surrender. Manchester City lead in every single stat. Shots, possession, shots on target, corners, even fouls. Everything went to them. Aguero would get his hattrick and Kolarov, Milner, and Silva would all join in on the fun. This is a great game to watch if you want to see exactly how the game should be played and how it shouldn’t be in a single match. It simply was one of the most dominant games by a team in the last 3 years.