Ever since Chelsea went on their incredible winning streak, several teams have challenged them for the top of the table. First, it was Manchester City. After they fell away, it was Arsenal. Next, it was Liverpool. Now, Tottenham seem the most likely candidates. This could ultimately change should Liverpool snag points off of Spurs this weekend, however. So what is going on? Why hasn’t there been a single consistent challenger to Chelsea’s title run this season?

One factor you can point at is Chelsea’s ability to focus on the Premier League. They aren’t in Europe this year, nor are they focusing heavily on domestic cup competitions. Instead, the reclaiming of the title has become the sole goal of this season. For the other teams challenging them for the title, this isn’t the case. Manchester City, Tottenham, Manchester United and Arsenal are all in Europe. Liverpool and United were also both deep in the League Cup that took their focus away. This isn’t the case for Antonio Conte’s men. They fell out of the League Cup early and were able to play a heavily rotated side during their FA Cup games this winter. This has kept the main squad refreshed and focused on the task at hand. 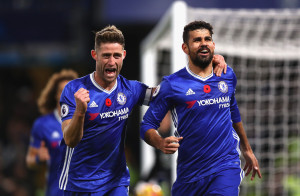 Another aspect of this season that has benefited them, though you wouldn’t have suspected it at the time, is that Chelsea’s terrible run of form was short and early. That run against Swansea (draw), Liverpool (loss) and Arsenal (loss) had several writing them off for Champions League this season. Truthfully, they did look fairly poor, even when they were getting results at the start of their win streak. That said, those three games had them out of the top four. It wasn’t until the aforementioned win streak that things turned around for them.

Compare this to the teams challenging them. Tottenham had their poor run in all of October and November. Manchester City’s bad run lasted nearly all of October, with gluts of poor form since then. Arsenal are Arsenal. Liverpool are still in their period of abysmal form going back to the start of the calendar year. Getting their bad period out of the way early has allowed Chelsea to look at what they needed to do and build from there. 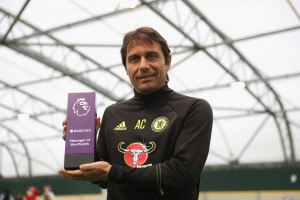 COBHAM, ENGLAND – NOVEMBER 17: Manager Antonio Conte of Chelsea is awarded the October Manager of the Month at the Chelsea Training Ground on November 17, 2016 in Cobham, England. (Photo by Christopher Lee/Getty Images for Premier League)

This builds into the next factor: overall consistency. Unlike any of the other challengers this season, Chelsea have maintained their high level of form. While their rivals were dropping points, they kept charging onward. Exacerbating this is Chelsea’s win streak midseason. This gave them so much room that when they finally did drop points, they had a cushion between them and everyone else.

This is ultimately what it comes down to. Chelsea have been so potent in the Premier League this season because they have been consistently excellent, unlike any of their competitors. Same could have been said about Leicester City last season. Leicester was consistently excellent and whenever they did drop points, their rivals likely dropped points too, keeping them ahead. Until one of the other five teams chasing them begins to capture some semblance of consistency, this merry-go-round of a top four will continue and Chelsea will be running away with the title.