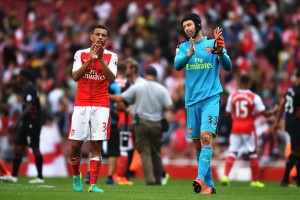 Another Premier League season is upon us, and with it comes another chance for Arsenal to win the Top 4 trophy. Things have started pretty bumpy for Arsene Wenger and his team. Currently, they have a singular point in the Premier League after a tough start against Top four rivals Liverpool and Leicester. In that time, they have shown the best and worst of what they have to offer as a team. Many Arsenal fans have decried that oh, if only they had the defensive stability against Liverpool and the attacking skill against Leicester, they’d be at the top of the table (or near enough for the start of the season). While that inconsistency should be a concern, Arsenal haven’t looked great and have sustained injuries that will keep them sweating for the time being.

Most worrying of all is the utter lack of transfers. Arsenal started the transfer season strong by bringing in Granit Xhaka for a reported £35m. The combative midfielder will bring some steel and grit to Arsenal’s midfield. The transfer was also fairly expensive, giving Gunners fans hope that Wenger would open the cheque book. That was quickly shot down, as the next three signings were Rob Holding, a young centerback from Bolton; Takuma Asano, a young Japanese forward who will need to be loaned out to get a work permit; and Kelechi Nwakali, a young Nigerian midfielder who went into the academy. It appears now that a move for Lucas Perez, the striker from PAOK in Greece, is on. His season on loan at Deportivo La Coruna was his best season ever, scoring 17 goals in 36 appearances. The move would be for a reported £17m. Finalizing a move for Shkodran Mustafi is also a possibility, but the likelihood of that deal being completed has fluctuated daily. 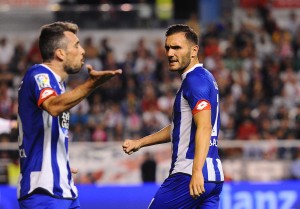 Looking at these two final pieces of transfer movement, we have to wonder. With such glaring issues, why now? Are they even the right moves? Perez has so far only had one season where he scored over 10 goals total. Even in his best season, he averaged .47 goals/game. Over his entire career, he has averaged .32 goals per game, with a total of 48. With Arsenal needing a goal scorer, and having been linked with Alexandre Lacazette and Gonzalo Higuain the entire summer, will that be good enough? We have to remember, the only other club Perez has been reliably linked to this summer is Everton, who would have brought him in to compete with Romelu Lukaku. At 27, he can’t be expected to have a sudden jump in ability either, as he will be in or around his peak right now. One has to wonder whether spending an additional £10-20m to get a top class striker would have been worth it to complete the team.

The other deal, for Mustafi, still looks somewhat unlikely. Valencia has no desire to sell. Even though the player would like the move to Arsenal, the ball remains in the Spanish club’s court. Unlike Perez, Mustafi would undeniably be worth the money that is being touted for the defender. At only 24, he is young for a defender, but has the skill and time to grow into a stalwart at the back. No, the question here for Arsenal is, with central defense clearly being a position of concern, why did Arsenal wait until so late in the transfer window to make their move for a defender? Wenger can complain about the price all he wants, but half of the fee that has been reported has been added to Mustafi because you moved so late for him. Had Arsenal gone for the player earlier in the window, the deal would be more attainable because Valencia would be willing to negotiate. 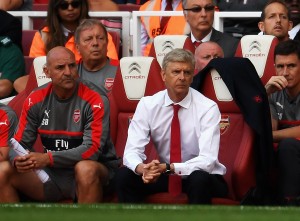 LONDON, ENGLAND – AUGUST 14: Arsene Wenger, Manager of Arsenal looks on during the Premier League match between Arsenal and Liverpool at Emirates Stadium on August 14, 2016 in London, England. (Photo by Mike Hewitt/Getty Images)

This summer has shown a shocking level of stagnant thinking, that things are good as they are, and lack of ambition. Let’s not forget that Wenger claimed that part of the reason they haven’t been spending this summer is because the club has “600 employees who [they] have to have a responsibility to as well.” Is the club having trouble keeping the lights on despite record high TV deals and being one of the most profitable clubs in the country? This excuse making, combined with the growth of other teams that will be competing with them, shows worrying trends for Arsenal.

Ultimately, many fans of the game are looking at Arsenal and getting the sense that this is the end of an era. A change is needed to rejuvenate the club. What the change is, because it is not necessarily sacking Wenger, will be the topic of much discussion throughout the season. From the outside looking in, though, something needs to happen. Last season, with the struggles of Chelsea and Manchester City, Arsenal should have won the league. Instead of looking at themselves after failing to do so and reloading this season to challenge, they have sat on their hands. This could very well be the season Arsenal finish outside of the top 4 for the first time since Arsene Wenger took the manager job. It could also be his last season.