Here are 32 Flags, we’re getting jazzed up for yet another international tournament. Fresh on the heels of an amazing FIFA Women’s World Cup and CONMEBOL Copa America, the CONCACAF Gold Cup begins on July 7. Games are being played through the US and Canada, so fans of soccer: get out and cheer on international soccer!

Haiti is going to be going for damage control. If they can eek out a draw, that’ll be great but they’re just happy to be here and will try to keep the scoring low.

Andrew Jean-Baptiste has all the potential in the world to become a great defender in MLS. The former Chivas USA player went to the New York Red Bulls but didn’t register a single appearance on the senior team. He was loaned to the USL team this year and was eventually released a few weeks ago. A player with supposed attitude issues, this is Jean-Baptiste’s first opportunity to play for a senior international team. The Gold Cup is essentially his audition to show other teams that he has changed and has what it takes to compete or else the 23 year olds career (and potential) could be over.

Honduras is going to keep the scoring low but they’re more than capable of winning. Honduras is famous for playing a highly defensive game and while parking the bus, they always seem to be in the running going into the final minutes.

Andy Najar came onto the scene in Washington D.C. as a young prolific goalscorer for D.C. United. After a breakout run in the 2012 London Olympics, the 22 year old was offered to go to Belgian team Anderlecht on loan and after impressing them for a month, got him on a permanent transfer. Najar has been doing great at Anderlecht, even scoring against Arsenal in the UEFA Champions League. He’s definitely going to be someone to propel Honduras in this tournament.

Panama is going to be one of those teams that’s hard to predict. While they do seem more defensive, Panama really has no set style that they’re known for. One game, they can be parking the bus and another, they can be attacking like crazy. That kind of unpredictability can give them the edge.

Blas Perez, the reliable Panamanian striker from FC Dallas, will be the key for Panama to advance through the Gold Cup. With 37 international goals, he is a single goal behind fellow Gold Cup teammate Luis Tejada for most international goals with Panama. 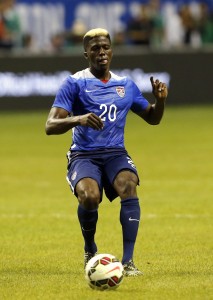 SAN ANTONIO, TX – APRIL 15: Gyasi Zardes #20 of the United States advances the ball against Mexico during an international friendly match at the Alamodome on April 15, 2015 in San Antonio, Texas. (Photo by Chris Covatta/Getty Images)

The hosts. The United States will be entering the Gold Cup with terrific momentum. First, they beat the Netherlands, then Germany and just last week, they beat Guatemala. They’re healthy, they’re on a roll and they’re hosting the tournament. They’re definitely the favorites.

Gyasi Zardes has been a huge part of the USMNT renaissance over the past month. Zardes scored his first international goal against the Netherlands and provided the key passes that created two goals against Guatemala. A pass to Michael Bradley which resulted in a PK and a pass resulting in a tap in goal by Chris Wondolowski. With Zardes’ pinpoint accuracy and blazing speed, the LA Galaxy’s homegrown player may have his breakout tournament in the Gold Cup.

Decisive Game of the Group: Panama vs. Honduras, July 10

With the United States likely winning the group and Haiti likely taking the bottom, that leaves Panama and Honduras as the teams fighting for automatic promotion in the 2nd spot.