Amid the busy soccer summer where we and the Bloguin network have been talking about such international competitions like the U-20 World Cup, Women’s World Cup, Copa America and the upcoming Gold Cup, we still can’t forget about the upcoming club season and the International Champions Cup.

The International Champions Cup is an international tournament from July 11 to August 5 comprising of friendlies amongst European club teams gearing up for their season as well as a sprinkling of CONCACAF teams. What used to be a tournament that was limited to the United States has now expanded to Australia, China and Europe. 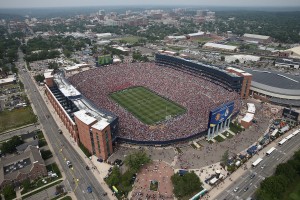 A general view of Michigan Stadium during the Guinness International Champions Cup match between Real Madrid and Manchester United at Michigan Stadium on August 2, 2014 in Ann Arbor, Michigan.

Fans have differing opinions about the International Champions Cup. Some fans like the concept of the ICC and other friendlies because they see this as an opportunity to see superstars from European teams that they normally wouldn’t see unless they traveled to Europe. This was shown when 109,318 people attended the Manchester United/Real Madrid game at Michigan Stadium in Ann Arbor in 2014. It broke a record for the highest attendance for a soccer game in the United States.

Other fans see the International Champions Cup and other friendlies as a less than pure way of seeing the best in the world compete because fans may see a lower quality version of a team. Friendlies are meant for training all players in order for them to be 100% for the start of the season. So, don’t expect to see Lionel Messi play all 90 minutes in every game for Barcelona in the ICC. Fans of MLS teams participating in the International Champions Cup have their own concerns because these games are in between the MLS season and can throw off a team who’s looking to get an MLS playoff spot.