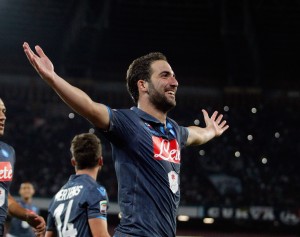 NAPLES, ITALY – OCTOBER 26: Gonzalo Higuain of Napoli celebrates after scoring his third goal during the Serie A match between SSC Napoli and Hellas Verona FC at Stadio San Paolo on October 26, 2014 in Naples, Italy. (Photo by Maurizio Lagana/Getty Images)

Now that Gonzalo Higuain is off to Juventus, we can begin to analyze what this deal does for the rest of Serie A. Without a doubt, this is an incredibly impactful transfer that will ripple throughout the league. Not only that, it will have a great deal of significance within Juve as well, and reaching implications throughout Europe. The first thing was have to look at is how does this effect Juventus? More than likely, Higuain will replace Mario Mandzukic in the starting line up. Mandzukic has done well in Italy, but now there are reports that West Ham are interested in the 30 year old. When you also consider that he doesn’t have youth on his side, unlike his 22 year old partner Paulo Dybala, it is the most obvious choice. This will mean that we shouldn’t expect too much of a tactical change from Juve, just that they will be more dangerous in attack. They now boast one of the most lethal strikers in world soccer and one of the most exciting up-and-coming talents as a front line. 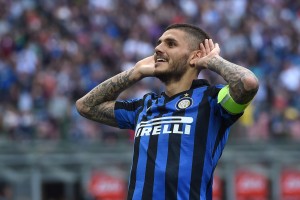 We must also take into consideration the wider effect this will have on the league. Gonzalo Higuain was a massive player for Napoli. They were willing to do just about anything to keep him at the club. Now that he is gone, it is expected that this will kick off a transfer merry-go-round as Napoli looks to fill the Higuain-sized hole in their team. Currently, the top pick would seem to be either Arek Milik of Ajax or Mauro Icardi, the Inter Milan captain who has also been linked with Arsenal. Both teams will not let their players go cheaply, however, knowing full well the price that Napoli demanded from Juve for Higuain. We can expect, if a move happens, that a large chunk of this money will go straight to buying the new striker, which will then force that team to replace their striker. There are several good strikers available in the market, and we can expect this transfer to have a knock on effect in prices.

Outside of transfers, Juve just bought one of the best, if not the best, strikers in Serie A from their closest rivals. This sort of thing is a tactic that has seen Bayern Munich, PSG (to a lesser extent), and the Spanish giants to retain dominance in their respective leagues. Not only does buying your rival’s best players strengthen your team, it weakens theirs, making it easier to win your league again. Rinse and repeat. Looking at last season, Juve won by 9 points. Aside for a few wobbles here or there, their dominance in the league was undisputed. We can expect more of that this season now that they have picked up one of the most predatory strikers in the world. 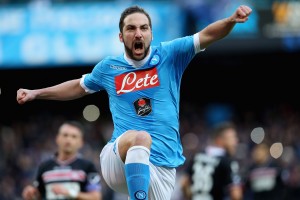 NAPLES, ITALY – FEBRUARY 07: Gonzalo Higuain of Napoli celebrates the opening goal during the Serie A match between SSC Napoli and Carpi FC at Stadio San Paolo on February 7, 2016 in Naples, Italy. (Photo by Maurizio Lagana/Getty Images)

Finally, this move will have ripples throughout Europe. Juve is a very good team and now that they have one of the top strikers in Europe, may be in with a shout at having a convincing run at the Champions League. Even if they don’t win, buying a player of Higuain’s caliber will give the other Champions League competitors pause about playing Juve in the upcoming tournament. We have also avoided the elephant in the room, until now. While this move has no bearing on any transfer dealings for Paul Pogba, financially, buying Gonzalo Higuain will make it easier for Juve to ultimately sell the French midfielder. The Italian Champions will undoubtedly continue to dig in their heels, but, where previously it may have been next to impossible for Manchester United to land their marquee target, there would appear to be a glimmer of hope.

As one would expect with the the third most expensive transfer in the history of soccer, this deal will have long reaching effects, and be scrutinized deeply. On the face of it, it’s a great move by Juve to strengthen their team while weakening a rival. How the 29 year old striker fairs with that price tag over his head now, is another matter entirely. He is definitely a player to keep an eye on this season.