When people go on Twitter and hit the “@” key, sometimes they don’t necessarily contact the person or organization they are intending to contact. Most of the time, this is a problem when people tweet at celebrities and sports teams and wind up getting someone else. That’s exactly what happened to Ashley Williams.

Last week, Welsh defender Ashley Williams was recently transferred to Everton from Swansea. Everton fans wanted to welcome Williams and many did so via Twitter. The problem was that the soccer player isn’t on Twitter and who they were contacting was actually actress Ashley Williams, who currently stars on The Jim Gaffigan Show. She also played the character Victoria on How I Met Your Mother.

Typically this is a common error when someone types in their tweet and assume that person has their name as their username. For instance, if people want to tweet at Chelsea the soccer team, they may tweet @chelsea even though their username is @chelseafc and @chelsea is actually the account of a female who has nothing to do with the soccer team. What’s bizarre here is that people were tweeting to the actress Williams’ username, which is @imthesmash and therefore should leave no confusion as to whose account that is. I mean, that plus the profile pic should’ve been dead giveaways for someone to not intentionally make that kind of mistake but I guess not. Or maybe they knew she wasn’t actually the soccer player and just wanted to have a little fun.

Despite that, Williams took it in good stride and seemed to have some fun responding to a few Everton fans to help them out. She even used the situation as a marketing opportunity to get some new viewers for her show. I don’t blame her, I would do the same thing.

Hey all soccer fans who are congratulating me about #AshleyWilliams move to Everton: watch #TheJimGaffiganShow! Also I’m terrible at soccer

@Lil_Gilbino81 you are the best!! I’m an actress and an enthusiastic soccer player, but not a good one. Watch @gaffiganshow!!

@Gf12George don’t unfollow me because I’m a late thirties actress on TV and not a kickass soccer player! — ashley williams (@imthesmash) August 10, 2016

@rishi_gooner I feel great about it

Williams even went so far as to change her header pic to a pic of her over soccer player Williams’ face as well as changing her bio. 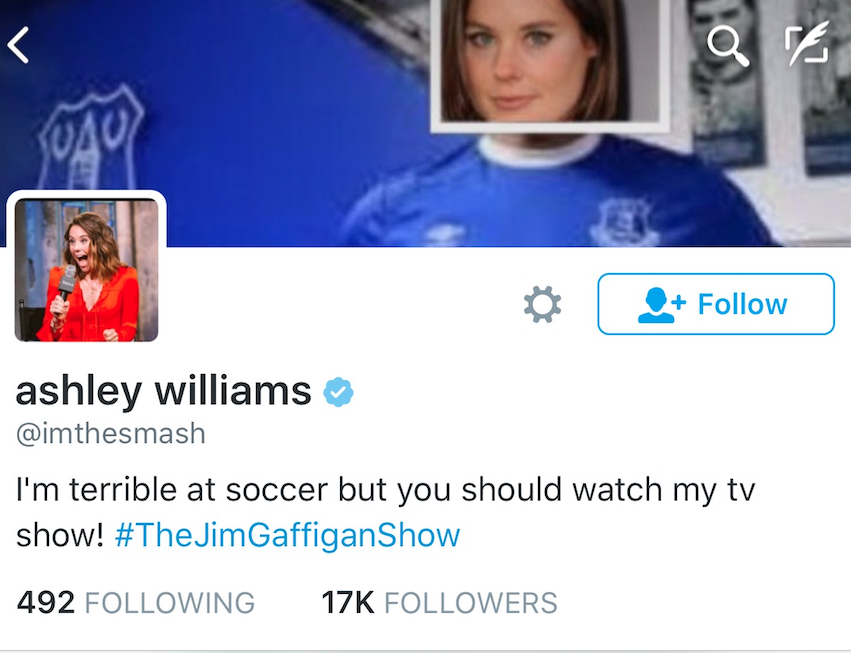 All in all, it appears this was all in good fun. If only there was a professional soccer player named “Jim Gaffigan,” then we would really be in business.