*UPDATE: The deal has finally been officially announced.

This deal has been rumbling on for the last week. We’ve been waiting for official confirmation before writing a report, but nothing has really been forthcoming. We’ve had opportunities (including the player telling the media himself of the deal), but nothing close 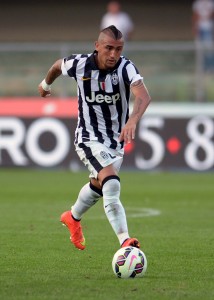 VERONA, ITALY – AUGUST 30: Arturo Vidal of Juventus in action during the Serie A match between AC Chievo Verona and Juventus FC at Stadio Marc’Antonio Bentegodi on August 30, 2014 in Verona, Italy. (Photo by Dino Panato/Getty Images)

to official. That was until Monday when Giuseppe Marotta, Juventus’ director general, said fairly directly that Chilean midfielder Arturo Vidal would be moving to Bayern Munich. Marotta stated:

“Vidal has expressed his desire to embark on a different experience, just like [Angelo] Ogbonna, [Carlos] Tevez and [Andrea] Pirlo.”

The deal is expected to be £28m after bonuses and addons. There had been rumors circulating that Mario Gotze could have been included in part of the deal, but when asked, Marotta denied the reports.

“Gotze is a Bayern player and we are not in talks for him.”

Vidal should be able to slot directly into Bayern Munich’s midfield. Such is the ability of this all-action midfielder. He can score goals, he can create magic, he can break up play. Vidal will be competing with the likes of Mario Gotze, Thiago Alcantara, Xabi Alonso, Javi Martinez, Philipp Lahm, and the recently purchased Douglas Costa. While that might seem like a huge task, rumors have suggested that at least two of those could be moved on this summer and Philipp Lahm is naturally a defender. This would open up the field for Vidal to really nail down a spot in the starting lineup. 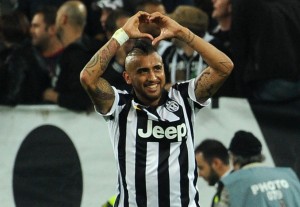 TURIN, ITALY – SEPTEMBER 24: Arturo Vidal of Juventus FC celebrates the goal of 1-0 during the Serie A match between Juventus FC and AC Cesena at Juventus Arena on September 24, 2014 in Turin, Italy. (Photo by Pier Marco Tacca/Getty Images)

Vidal is considered by many to be the replacement for the out-going Bastian Schweinsteiger. This is a fairly good trade-off considering the players are similar enough in style, while different enough to represent a change. Vidal is certainly no holding midfielder as some have believed him to be in the past. Instead, he will most likely take a similar role to Javi Martinez took. He simply is capable of doing it all.

Juventus is expected to make a move for highly rated German midfielder Julian Draxler once the move is confirmed. They see him as the perfect replacement for the outgoing Chilean. Could be quite the summer of change for the Old Lady of Italy.