Tottenham have confirmed the signing of Heung-Min Son from Bayer Leverkusen in a £22m deal. The deal is subject to international clearance and a work permit.

The South Korean attacker can play anywhere across the front and should fit well into Mauricio Pochettino’s style of play. Son will most likely take up a spot on behind, or partnering, Kane in attack. This move is seen by many Spurs giving up on their pursuit of West Brom attacker Saido Berahino. Heung-Min Son will also be a replacement for Erik Lamela, 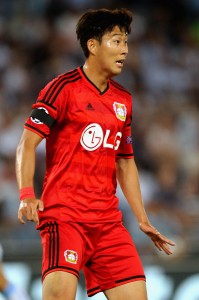 duing the UEFA Champions League qualifying round play off first leg match between SS Lazio and Bayer Leverkusen at Olimpico Stadium on August 18, 2015 in Rome, Italy.

who is expected to be leaving the London club soon. Either way, Spurs have signed a young, adaptable attacker who can fit their style of play well.

Son comes with the added bonus of being incredibly popular in his home country. This move is expected by many to boost Spurs’ own popularity in South Korea. This seems very much like a Daniel Levy deal. The Tottenham chairman is nothing if not a shrewd businessman and will love the added benefit the player will have for the club.

There are of course risks in this move. Son, while capable of brilliance, can be somewhat inconsistent and would struggle against sides that bullied him. It will be interesting to see how he will cope with the more physical sides in the Premier League.

The biggest risk for this player has nothing to do with soccer, though. All able bodied South Korean males are required to see out a 21 month tour of duty in the South Korean military by the time they are 28. The 23 year old will be forced to spend the prime years off his playing career away from the pitch. It is this reason that Spurs have given the player a contract until 2020, which will fall within the time he will be away on military service. With his contract ending as he begins his service to his home country, Spurs look set to be willing to lose the player on the free in five years.

Their only other option would have been to try to sell the player before his service begins to try and recoup some of that money, but that would be difficult to swing.

All in all, Spurs look set to bring in a player who can add a lot to their squad and have weighed the risks. At only 23, Spurs can expect a good five years. We’ll add a little video below for all of you Youtube scouts out there.