Let’s start this preview off with a crazy fact. This is the first time in the over 100 year history of this rivalry that Liverpool and Manchester United are playing each other in a European competition. I kid you not. While these two giants of English soccer have played nearly 200 times, they have all been in domestic competitions. To think, in those years of complete dominance, they didn’t play one another, but now, once their respective stars have fallen a bit, they play in Europe.

That doesn’t mean this game will have any less bite to it since it is in the Europa League. On the contrary, this might turn out to be one of the hardest fought games of the season. Both teams will want to win over their biggest rival, but, more importantly, both teams need to progress in the Europa League. Even though both have closed the gap on the Top 4 considerably recently, it is still a long shot that they would qualify for the Champions League without winning the Europa League. 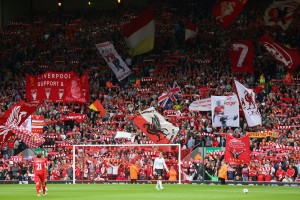 LIVERPOOL, ENGLAND – SEPTEMBER 01: General View of the Kop during to the Barclays Premier League match between Liverpool and Manchester United at Anfield on September 01, 2013 in Liverpool, England. (Photo by Alex Livesey/Getty Images)

Liverpool are going to want to win this badly. Outside of the obvious, they have now lost to Manchester United four times in a row. That won’t be accepted by Jurgen Klopp and the fans on the Kop who will be watching the game at Anfield this Thursday. It’s a European night, under the lights at Anfield. For many fans, this type of game is the stuff dreams are made of. It’s not as though Liverpool have been poor in their games either. This season, they have demolished teams and played some amazing soccer. What they are capable of isn’t the concern. The problem keeping Liverpool fans up at night is worrying what Liverpool team will show up. There is very little middle ground between the incredible performances that we’ve seen against Manchester City and Southampton, among others, and some of the abject showings against the likes of West Ham and Crystal Palace. 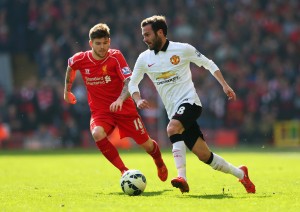 Manchester United have as many concerns as Liverpool right now. They have a manager that many fans hate, owners that many fans hate, and a board that many fans distrust. They have an aging, unbalanced squad. All of these problems, yet they still keep ticking. That is the one thing about Manchester United I will never understand. Their style of play may be used as an ambien alternative for insomniacs, but there they are, in 6th place, three points behind Manchester City in 4th. That’s also not to say that they are incapable of playing well. They have demolished teams this season, such as Midtylland, Shrewsbury Town, and Stoke. Much like their great rivals, it all depends on what Manchester United team shows up on Thursday. Will van Gaal, who is very difficult to predict, trust the youngsters that have probably saved his job, for now, in what promises to be one of the toughest games of the year? Will he go with the established professionals, who have consistently let him down this season? It’s difficult to say, but both teams enter this game with the potential to destroy the other, or to be destroyed themselves.