So who won the Super Bowl last night? Well, if you’re the Daily Mail, it was the New England Revolution. New England’s MLS team has apparently switched sports, quite successfully I might add. I have never seen a team go from one sport to another, mid season, only to win the highest honors in the NFL. This will surely come as a boost to fans of the club after narrowly missing out on the MLS Cup.

Obviously, this was a typo by the Daily Mail, who meant to refer to the New England Patriots. That being said, no quarter can be given to this rag of a newspaper. The Super Bowl is a big event and it’s pretty clear who won. The smallest amount of research would have given them the right team, so it’s a lazy error.

The Daily Mail caught the error and edited the report after the fact, but not before one of our writers was able to get a screen shot. Enjoy. 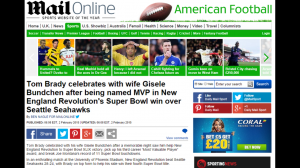