Yesterday’s Barcelona/Manchester City Champions League game had some crucial moments. Joe Hart stood on his head and put in a world class performance stuffing some world class opponents. Regardless, no moment was more important than Marc-Andre ter Stegen’s save on Sergio Aguero’s penalty in the 78th minute. The save really sealed Manchester City’s fate and Barcelona advanced 3-1 on aggregate and 1-0 yesterday.

While it wasn’t noticed right away, Javier Mascherano became the unsung hero in the most important moment of the game and directly helped Barcelona clinch advancement to the Quarterfinals. 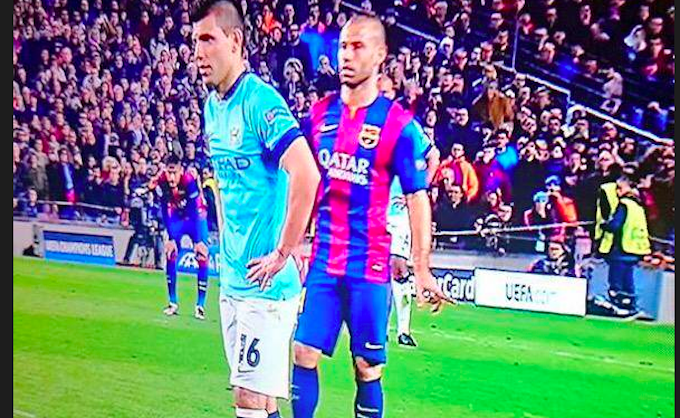 As you can see in the pic above, Mascherano coached ter Stegen and as Aguero was about to take the PK, told ter Stegen to dive right and sure enough, the shot was saved and Barcelona won.

Personally, I have always hated when people say that PK’s are random. They are far from random. It is more than the goalkeeper “guessing” where the shooter is going to place the ball. It is a psychological test between goalkeeper and shooter and once one can discover a “tell” or a pattern based on past PK attempts over the other, they have the advantage. Javier Mascherano discovered something about Sergio Aguero that he was confident that he would shoot to ter Stegen’s right and that helped Barcelona advance. Those little things help you become successful in penalties and win games. Anyone who just sees PK’s as random, will not be successful for very long.