By a vote of 133 to 73 with 3 invalid ballots, Sepp Blatter has won a 5th term as FIFA President over Prince Ali Bin Al Hussein of Jordan, as Prince Ali conceded defeat rather than go to a second vote. Blatter failed to secure 2/3 of the votes to win on the first ballot. To soccer outsiders, this was believed to be a much closer election than it actually was while soccer insiders and most soccer fans realized the writing on the wall. Quite frankly, I’m surprised Prince Ali was able to take it to the second ballot. 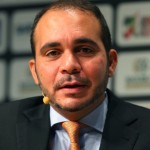 With 209 FIFA members rendering a vote, the quantity of the smaller countries can overpower the world superpowers and can keep Blatter in power. For one thing, because he has provided money and resources to all of Africa and almost all of Asia (whether or not that got to the people and not to officials varies) is dedicated to voting for Blatter for fear they will no longer receive that support. Add that a country like Vanuatu gets the same amount of money from the World Cup proceeds as the World Cup champion Germany and these countries on the lower half of the FIFA rankings who have no shot of getting close to the FIFA World Cup will vote for Blatter.

The vote was the final part of the agenda in the 65th FIFA Congress, which seemed to take forever. After what seemed like years, the FIFA Presidential election started and that took just as long. I always hate it when soccer haters say “soccer is boring” but they were right today. This seemed to drag on and on and on. Finally at 1:18 PM ET, the votes were finally tallied and Prince Ali conceded defeat instead of try another ballot that would likely yield a similar tally.

This brings up another reign of Blatter. There will be unknowns as to what happens to the United States in regards to hosting the 2026 World Cup or even their standing in FIFA since the US announced they would vote for Prince Ali. UEFA has threatened a boycott and while it hasn’t been mentioned, you can make the argument that amid all the arrests from this week, FIFA is at its weakest and is the best chance for someone (like UEFA perhaps) to break apart and form their own confederation. That’s a huge hypothetical but it’s a much more plausible scenario now than in the beginning of this week.